Terrorized by the media

Spare us the sky-is-falling hysteria. If anything, the failed bombing shows how little we need to fear al-Qaida 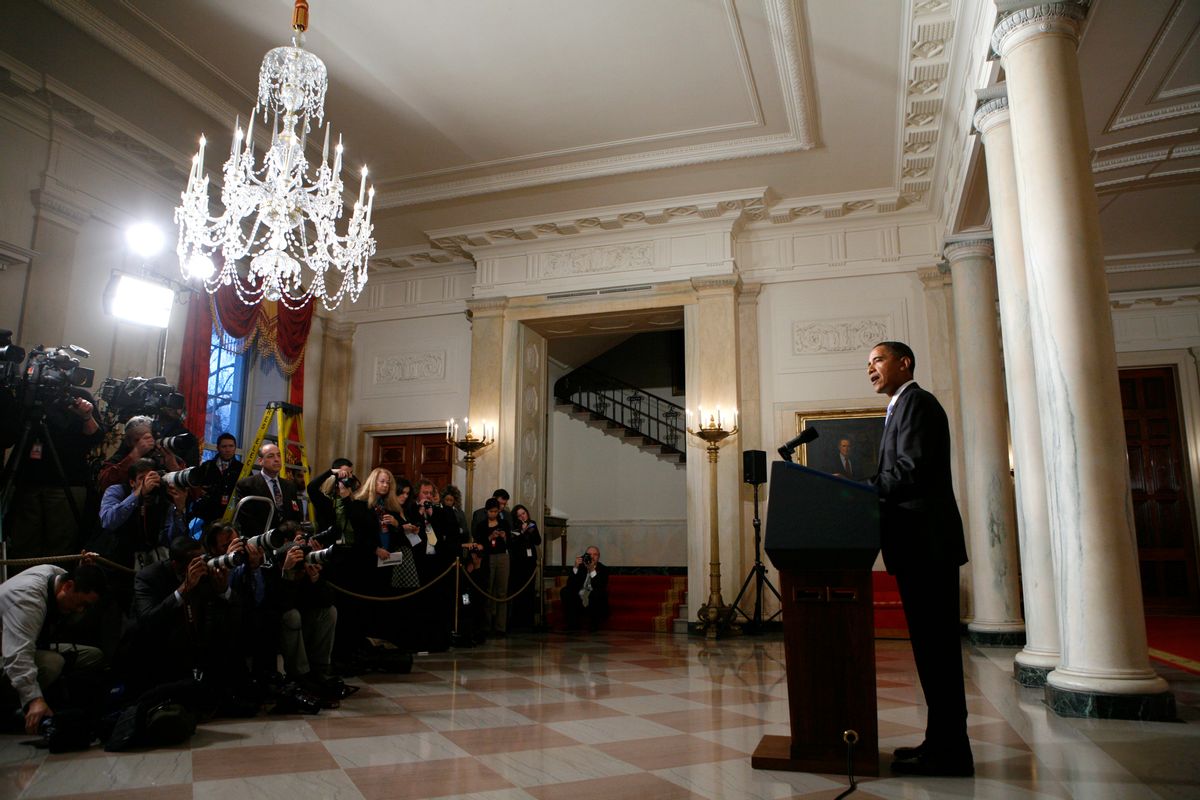 President Obama speaks about plans to thwart future terrorist attacks, on Jan. 5, at the White House.
--

No one can say how America's struggle with Islamic extremism will end, save that it won't be resolved by having Matt Damon kill Osama bin Laden in single combat. And President Obama won't yell "Get off my plane!" before tossing Khalid Sheikh Mohammed to his death.

However this conflict ends, Bruce Willis will not be involved.

Most Americans understand that the long battle against al-Qaida and related terrorist groups has little in common with a Hollywood plot. Or at least I hope they do. Watching excitable media personalities and the Chicken Little wing of the Republican Party doing everything possible to turn the failed Christmas airline bombing in Detroit into a combination Super Bowl-size ratings bonanza and political opportunity, however, made me wonder: Can't these jokers be serious about anything?

TV news broadcasters dote upon melodrama. The fact that would-be Nigerian terrorist Umar Farouk Abdulmutallab struck on Christmas Day, one of the slowest news days of the year, sent the media into overdrive. For CNN, Fox News and the rest, the catastrophe that blessedly didn't happen spurred them to do what they do best: gather a terrific amount of information in a short time and inform us about what happened aboard Northwest Airlines Flight 253 -- and, equally important, what didn't, such as a coordinated attack by multiple terrorists.

(Was I the only one who wondered whether the heroism of Dutch tourist Jasper Schuringa, who threw himself on Abdulmutallab, preventing the bomb in his pants from detonating, got relatively short shrift because he wasn't an American?)

Moreover, the rapidity with which the media had gathered crucial information about the would-be terrorist only underscored the magnitude of the intelligence failure. How, in the age of Google, can the Transportation Security Administration not have an instantly searchable database containing every suspect who has come to the attention of the CIA or FBI, much less one whose father warned U.S. embassy authorities about his son's growing radicalism?

Obama has demanded an answer. Congress needs to make sure Americans get one, even if that means having to endure Sen. John McCain and Holy Joe Lieberman's unique blend of smugness and solemnity for weeks at a time.

However, we could all do without the sky-is-falling hysteria. If anything, Abdulmutallab's failed atrocity attempt demonstrates, once again, how little America as a nation actually has to fear from al-Qaida. Everyone reading this column is far more likely to die in an automobile accident or an influenza epidemic than at a terrorist's hands.

Islamic extremists can't invade the United States or cripple its armed forces, can't heavily damage the nation's infrastructure or productive capacity, can't impair the nation's functioning nor undermine its government. All they're capable of -- and the Flight 253 episode shows them not terribly good at that -- are mass murder atrocities, the purpose of which is to terrify Americans into doing stupid things that sap our morale and damage ourselves.

Things like invading Iraq, resorting to using torture, abandoning the rule of law and demanding authoritarian solutions that provide a false sense of security to people quivering with media-amplified fear. Such as Lt. Gen. Thomas McInerney's demand on (where else?) Fox News that all Muslim men between ages 18 and 28 be strip-searched before boarding airplanes. Only the cravenly politically correct, he thinks, could object.

McInerney's idea sounds appropriately tough-minded for the approximately five seconds needed to realize that Muslims come in all possible shapes, sizes and colors, but without labels. Maybe we should just strip-search everybody -- ex-Pentagon officials first.

But the real telltale headline appeared in the Washington Post on Dec. 30: "Republicans see political opportunity in Obama response to failed airplane bomb." Dick Cheney emerged from his bunker to claim it's all the president's fault. "We are at war and when President Obama pretends we aren't, it makes us less safe," he said. "Why doesn't he want to admit we're at war? It doesn't fit with the view of the world he brought with him to the Oval Office."

Of course, he's done so many times, but that's not the point. Neoconservative columnist Charles Krauthammer also discerned semantic weakness in Obama's using the term "extremists" where he'd prefer "jihadist."

If not for the president's craven refusal to pronounce the Magic Words, in precisely the right order, you see, al-Qaida would no longer exist.