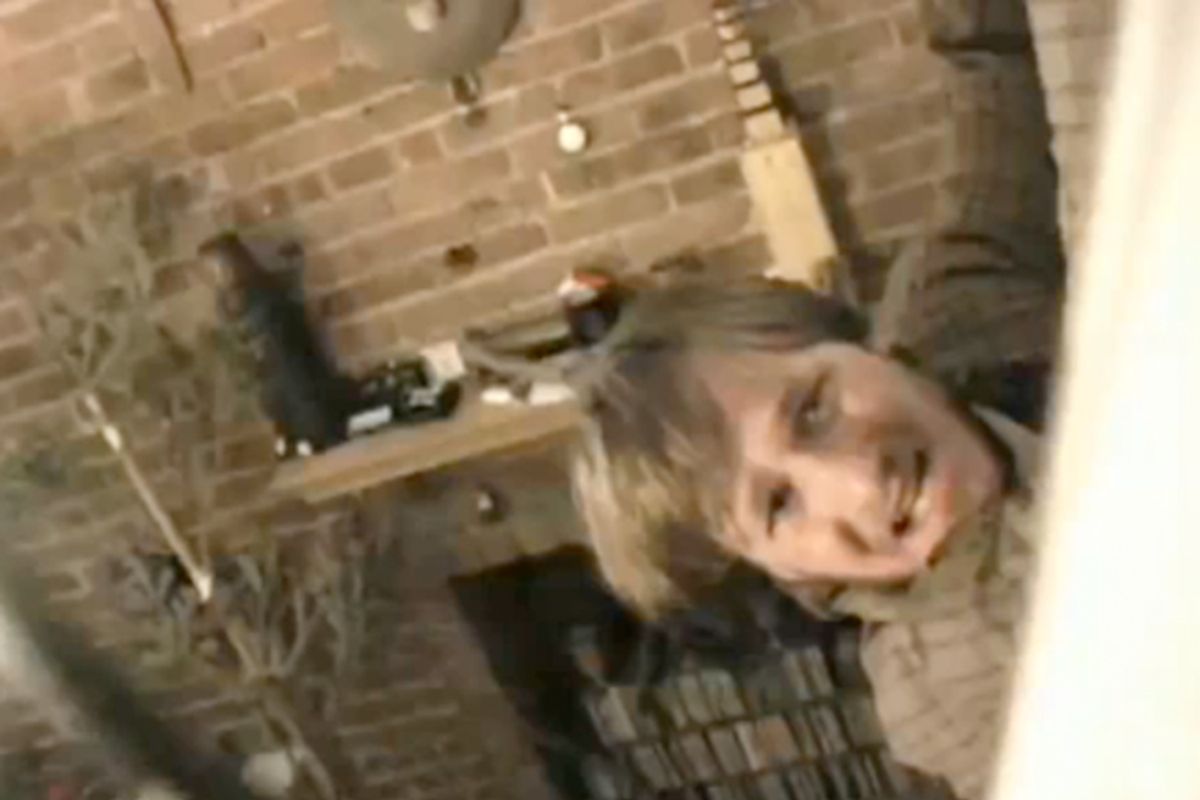 We can start by explaining that Zachary Oberzan's movie "Flooding With Love for the Kid" is adapted from the same early-'70s novel by David Morrell that inspired the 1982 action smash "First Blood" and thereby launched Sylvester Stallone's Rambo franchise. That's already pretty weird, but in this case you can't separate the story Oberzan is telling from the way he's telling it. There are low-budget movies and no-budget movies, but there are hardly any like "Flooding With Love for the Kid," which by Oberzan's account was made for $95.51 and shot almost entirely inside his 220-square-foot Manhattan apartment.

We get to know every inch of that apartment across the 107 minutes of Oberzan's film, and here's the funny thing about that: The longer the movie goes on, the more you adjust to his hand-made "special effects" -- which kind of split the difference between a 10-year-old playing war in his room and Lars von Trier's "Dogville" -- and the more you accept that realism, in any ordinary sense, has been totally abandoned. Oberzan's bookshelves and DVD cabinets become momentary shelters for deranged fugitive Vietnam-vet John Rambo (played by Oberzan, as is every other character, including several dogs). His tiny closet becomes a cave smeared with bat guano, his bathtub a muddy streambed, his sleeping loft a cliff in the Kentucky woods where numerous sheriff's deputies meet ignominious ends.

I suppose Oberzan's movie will invite comparisons to "Raiders of the Lost Ark: The Adaptation," the semi-notorious shot-for-shot remake made by a group of schoolmates in Biloxi, Miss., but the two projects are quite different. ("Flooding With Love for the Kid" is not a remake of "First Blood" in any sense, although it tells approximately the same story.) Some critics have described Oberzan's work as a species of outsider art, but that confusing term misstates the degree of naiveté at work here. Oberzan is perfectly aware that his production standards are below ludicrous, and frequently invites us to laugh along: The animal Rambo kills and eats while he's on the run from Sheriff Teasle (the memorable Brian Dennehy character from the 1982 film) is a teddy bear, stapled to a piece of imitation Christmas tree; the helicopter used by pursuing troopers is a ventilation fan laid on its side, attached to a plastic propeller. Although Oberzan uses off-the-shelf digital software to include himself playing different characters in the same shot, he never bothers to make it look seamless, and his superimpositions and paper-cutout "animations" would look primitive to a 1920s filmmaker.

But none of this is meant to cast mockery on the story itself, which Oberzan delivers with passionate commitment and a wire-walker's daring. It's true that while Oberzan develops a certain slow-burning power in portraying the monosyllabic, damaged Rambo, his performance as backwoods lawman and Korean War vet Teasle -- arguably the story's most complicated and interesting character -- is never remotely convincing. (I'm not even mentioning one supporting character's bizarre "Scottish" or maybe Indian -- Lithuanian? -- accent.) Again, that doesn't matter as much as it arguably should. By chucking all normative standards of dramatic realism and character psychology, by rendering the very concept of suspension of disbelief ridiculous, Oberzan has shoved the story of Morrell's 1972 novel "First Blood" out of the action-movie realm and back into archetypal masculine myth, whence it began.

In fact, I feel like I understand what "First Blood" is really about much better after seeing this version. Having one man play both Rambo and Teasle (however badly) underscores the fact that they're a yin-yang pair of American males with crippled dreams, divided by generation and perhaps by ideology, but essentially similar in background and outlook. The Korea vet and Vietnam vet are literally joined by blood; they're both a metaphorical father-son pair and a homoerotic couple who cement their passionate union with guns rather than genitals.

Oberzan's movie is a video-age version of the author-actor "solo performance" vogue pursued by many theatrical autodidacts since the '90s. But that trend itself was an attempt to get back to something much older, to fireside storytelling and medieval bards and lyre-strumming Greek poets spinning tales of gods and heroes. We can't know whether Homer used sock-puppets to illustrate the story of Scylla and Charybdis, or climbed on a chair and stuck a fake eyeball on his forehead to play Polyphemus. But in that sense, there's nothing the least bit postmodern or experimental about "Flooding With Love for the Kid"; its charm comes from its heartfelt loyalty to that ancient storytelling tradition.

"Flooding With Love for the Kid" plays Jan. 8-14 at Anthology Film Archives in New York. Further engagements may follow.

There are few, if any, feature films made quite as cheaply as Zachary Oberzan's "Flooding With Love for the Kid." But here's a slideshow of some of the better-known no-budget movies in recent history.