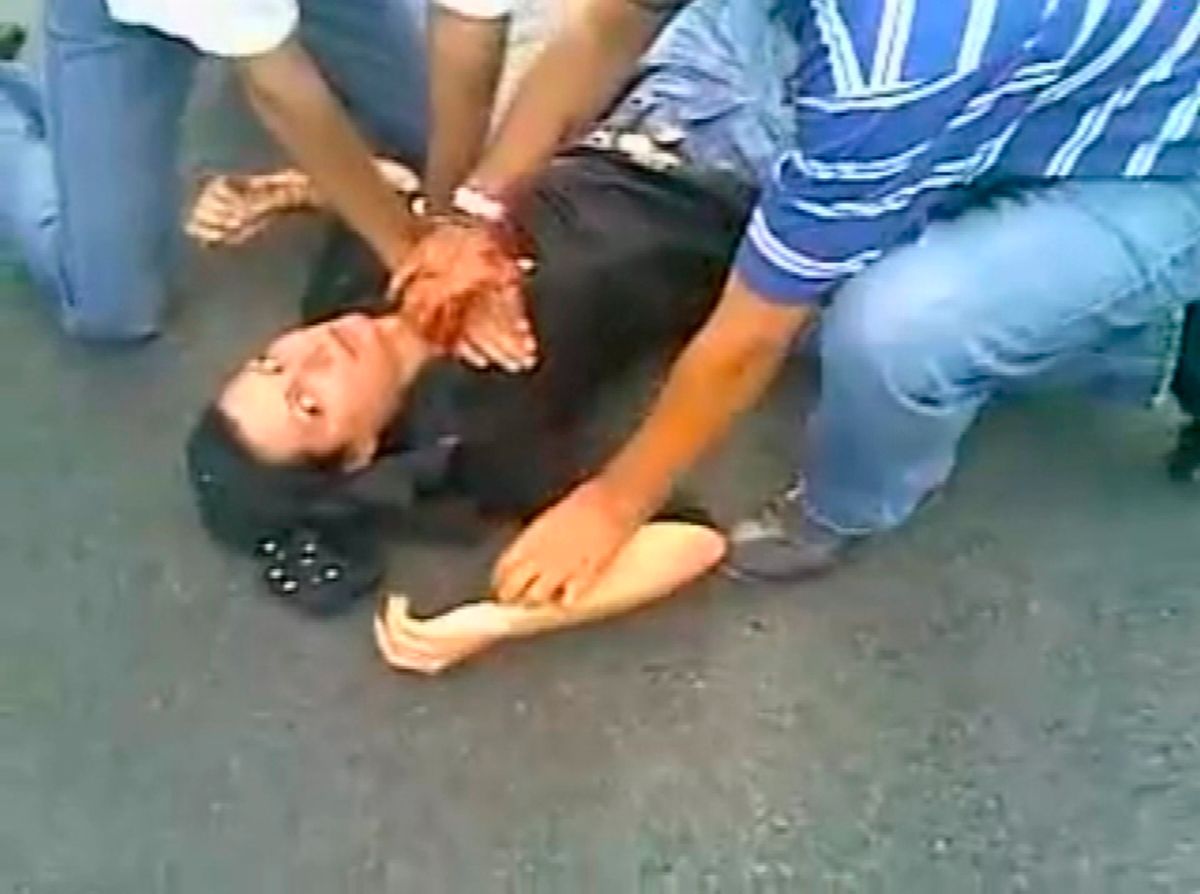 EDITORS' NOTE: Reuters and other foreign media are subject to Iranian restrictions on their ability to report, film or take pictures in Tehran. A frame grab from YouTube shows a woman identified as Neda Agha-Soltan lying on the ground after getting shot in the chest in Tehran June 20, 2009. Iranians on social networking sites called for mourning for "Neda", a young woman shot dead on Saturday. Footage of her death has been watched by thousands on the Internet and her image has become an icon of the protests. REUTERS/YouTube (IRAN POLITICS ELECTIONS CONFLICT) QUALITY FROM SOURCE. FOR EDITORIAL USE ONLY. NOT FOR SALE FOR MARKETING OR ADVERTISING CAMPAIGNS (Reuters)
--

Shortly after Neda Agha-Soltan was shot dead during a June election protest in Tehran, the Iranian government began trying to minimize the impact of her death, which was captured on a cell phone video and viewed worldwide with in days. They banned public mourning of her, even forcing her family to remove black banners from their home, and began insisting the video did not show what it seemed to, making various claims about what really happened. Arash Hejazi, the doctor seen tending to Neda in the video, told Radio Free Europe/Radio Liberty, "Their first reaction was that she was alive. Then they said the footage was fake. One day they said a BBC reporter killed her. Then they said it was the CIA. Then they said the [Mujahedin] Khalq Organization [MKO] was behind it." Now, Iran state television has produced a documentary that "presents 'another side' of Neda's death, and challenges claims made by 'Western media," by suggesting that Neda was an agent of the U.S. and Britain who faked her own death -- i.e., not "another side" of the story so much as another story entirely. Reports RFE/RL, "The state-television documentary suggests the video of Neda's dying moments merely depicted her pouring blood on her own face from a special bottle she was carrying."

They're no longer claiming that Neda is alive, at least -- just that she was killed later, in the car that took her away from the scene, as part of "a plot orchestrated by foreigners and opposition supporters," including Hejazi and Neda's music teacher. The documentary narrator explains, "While Neda is [pretending] she is injured and is lying on the back seat of the car on their lap, they bring out a handgun from their pockets. A handgun that they obtained from their Western and Iranian friends to water the tree of reforms and kill people and create divisions within society. Neda, for a moment, realizes their wicked plan and struggles to escape, but they quickly shoot her from behind." Iranian officials have also claimed that these same British and American groups that supposedly infiltrated the opposition were behind the death of Ali Mousavi, nephew of opposition leader Mir Hossein Mousavi, in December.

When I wrote about the video of Neda's death as it was first being broadcast on news programs and viewed millions of times on YouTube, I was cynical about some people's motives for watching it, including my own. Although it was clearly important to know what happened to Neda -- and 10 other protestors that day -- I wasn't sure it was equally important to see it. In fact, for me, the video's impact was dulled because part of my brain couldn't quite accept that it was different from the thousands of fictional violent deaths I've seen on screen in my life. I wrote, "The thought kept going through my head, 'This is real, this is real, this is real.' But it was no match for almost 30 years' worth of knowing that when I see blood gushing out of a chest or a mouth, it's actually red-tinted corn syrup; that when I see the spark of life leave a victim's eyes, they only stay that way until the camera shuts off and the actress stands up." Now, hearing that the Iranian government has gone to such lengths to convince people that is all we saw on that video, I can fully appreciate the crucial difference between hearing about Neda's murder and bearing witness to it. Even if a part of my mind worked to deny it, I do know exactly what I saw -- and so do millions of other people around the world, no matter what the regime's latest official story is.