The literary phenomenon behind "Eat, Pray, Love" embraces a second marriage, and her everywoman book-club status 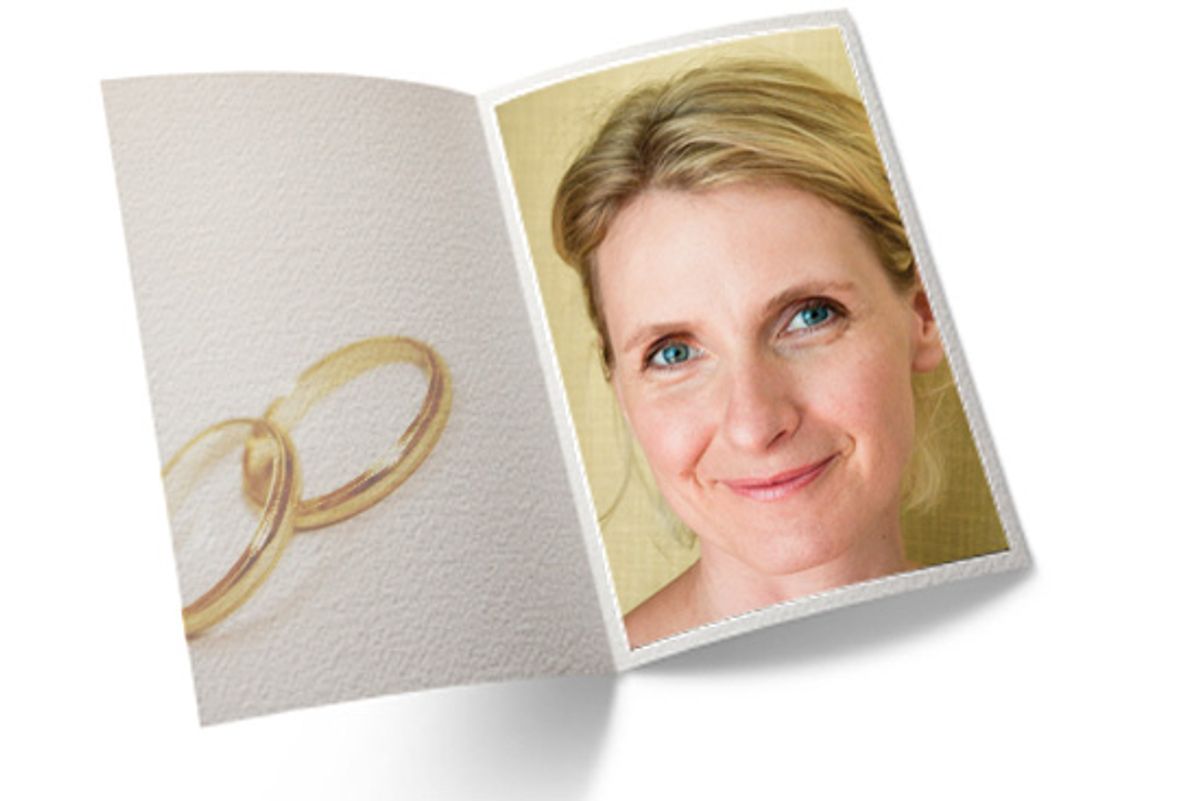 Back in the late '90s, Elizabeth Gilbert published her first book, a collection of strange, dark short stories called "Pilgrims," which, according to her, sold "about 11 copies." At one reading, only a single person bothered to show up, a lone man, who she was convinced just might live in the bookstore. Since the publication of her fourth book, the 2006 memoir "Eat, Pray, Love," however, it's no exaggeration to say that she generates pilgrims of her own. They trickle in, "generally women in groups of three," to her husband's small import shop in New Jersey, they take up therapeutic yoga and pizza eating and, this past Tuesday, on an evening when temperatures in New York City threatened to dip into the teens, 500 of them filled the fourth floor of Barnes and Noble in Union Square to hear Gilbert read from her new book, "Committed," which finds her wrestling with the question of whether to marry "Felipe," the handsome Brazilian gentleman Gilbert met in Bali after all that eating in Italy and praying in India. (In fact, the pilgrims so packed the place that when Gilbert relayed this anecdote about the sparse attendance in her early days, the best hope most of the audience had to see her in person came from the monitors in the cafe one floor below.)

"Eat, Pray, Love" has sold more than 6 million copies and launched approximately that many book clubs, making Gilbert "the Malcolm Gladwell of soul-searching," according to Time magazine. This summer, no less than Julia-effing-Roberts will play Gilbert in the story of her life. And as someone who writes on women and reviews books for a living, I can personally attest that not since "The DaVinci Code" have so many friends and family members and total strangers -- many of whom claim they don't even like to read -- championed a book. (During an interview with a certain yoga-loving, vegan indie-film actress, she popped into a full cobra pose and exclaimed, "You must read 'Eat, Pray, Love'! It changed my life!") Hell, Gilbert is now so famous that even Oprah, who called "EPL" "the modern woman's bible," claimed to be star-struck in her presence.

But unlike, say, Mr. Gladwell, Gilbert's most famous book has brought her a set of fans who prefer to think of her as their dishy best girlfriend rather than the veteran writer and world traveler that she actually is. These fans tend to forget that, long before she became synonymous with a certain kind of soulful chick lit for the yoga set, Elizabeth Gilbert had already published three books (mostly dealing with manly, even macho subjects, her last one a nonfiction account of a mountain man called "The Last American Man"), had been nominated for a National Book Award, and had one of her articles made into a terrible film produced by Jerry Bruckheimer (that would be "Coyote Ugly"). Despite these accomplishments, a young woman at the Barnes and Noble event stands up and asks Gilbert to explain how exactly she created such a detailed portrait of her year abroad. Was it from memory?

"Well," says Gilbert gently, with the practiced restraint of a woman who has perhaps answered this question a few too many times, "I had a book deal." She then goes on to explain what so many other writers can't forget (with not a small bit of seething envy) but non-writers never seem to remember: The year she spent bopping around Italy, India and Indonesia was funded in advance by a publisher and, given that those people tend to frown upon taking their cash without delivering a product in return, she took copious notes on her journey. Because she is, you know, a professional writer.

It is, in fact, a testament to her carefully honed professional skills that Gilbert was able to craft such a deceptively casual, unstudied writing style. In "Eat, Pray, Love," she claims that her "Superpower" as a traveler is to be so personally charming that she "could probably make friends with a four-foot-tall pile of Sheetrock." As a writing personality, her self-deprecating humor allows her to morph from a woman who may have otherwise been intimidating in her accomplishments into a girlish everywoman. (Gilbert is even able to turn her physical attractiveness into a playful liability -- sure, she may be tall and blond, but that just makes her more "flamingo" than "chameleon" when traveling in China.) It also doesn’t hurt that she has a canny sense of the cultural zeitgeist: Just as "EPL" emerged at the locus of a newfound interest in spirituality, "Committed" wrestles with questions of marriage and fidelity at a time when gay marriage, sex scandals and feminists have placed it center stage.

Of course, according to Gilbert, she would never have had any interest in marrying Felipe -- much less turning her decision to do so into another book-length account of their romance -- had the United States government not detained him in the basement of a Dallas airport and refused him entry unless Gilbert agreed to make an honest American citizen out of him through the magic of matrimonial pixie dust. Gilbert's predicament makes her a curious counterpoint to all the clichés concerning women of a certain age: a 37-year-old (at the time), financially independent, resolutely childless woman who, against all her wishes, must reconcile herself to marrying a man she already considers her love and life partner.

But "Eat, Pray, Love" superfans be warned: Despite many exotic settings, this story in which Gilbert plays the role of reluctant middle-aged bride doesn’t come with nearly as much drama or high stakes as it did when she was a recently divorced, possibly clinically depressed woman on a whirlwind round-the-world tour to reclaim her sanity. According to Gilbert, she trashed the first draft of this book -- a 500-page manuscript tentatively titled "Weddings and Evictions" -- before even showing it to her publisher, in part, she says, because she believed it relied too much on a girlish charm that she found unbecoming in a woman nearing 40.

Whether one found the voice of "EPL" charming or cloying may be a matter of taste. In "Committed," she attempts to expand her personal experience by grafting on the experiences of others: She presents mounds of sociological research on marriage, harvested mostly from the work of other writers and researchers (who, no doubt, may have a distinct feeling of ambivalence in seeing their work both advertised and perhaps, to their minds, bastardized in a book likely destined to sell more copies than all their books put together), coupled with a handful of interviews with third-world women she encounters in her travels throughout Southeast Asia while she and Felipe await his new visa. (She discovers, for example, that the Hmong women, whose marriages sometimes begin as ritualized kidnappings, do not see their husbands as the emotional center of their universe in quite the same way as Western women do, and also may believe that a 37-year-old woman and a 55- year-old man may be too damn old to get married anyway.) Even when the information itself is interesting, the end result feels more like a book-length blog treatment -- a skilled writer recycling information that may have been more thoroughly presented in its original form.

And for a writer who has made her bones as the modern, educated, urban Western everywoman, her issues may strike many readers as needlessly overwrought. And when she walks the reader through the tough issues of marital compatibility, the two biggies she and Felipe face -- different country of origin and age -- are hardly typical of the usual questions of money, children and housework that come up in many feminist marriages. (Felipe, by the way, mostly stayed at home with his kids when they were young and considers himself a "feminist husband" who believes a woman’s place is in the kitchen -- drinking a glass of wine, with her feet up, while he prepares dinner.)

This is not to criticize Gilbert for somehow failing other women by nabbing an awesome husband. Even those who find Gilbert unbearably self-indulgent might have to admit that it is precisely her dissatisfaction with her outwardly "perfect" life that can give her first-person stories the subversive appeal of a fairy-tale princess climbing out of her castle window on a bedsheet. This is, after all, a woman who began "Eat, Pray, Love" as the owner of an apartment in Manhattan and a country house bought largely with her own earnings as a successful writer, who managed to set one of the darkest scenes of that book on a tiny tropical island where she had retreated following two weeks of enjoying restorative yoga (paid for by a magazine, naturally). And yet readers were willing to empathize with this woman, living a life few of them could ever hope for, because she so exemplified ordinary grief and unhappiness: She had fallen out of love with her husband, was pretty sure she never wanted to have children, and wanted a divorce. At the end of the book, she and Felipe pull up to that same tropical island, roll up their jeans and jump into the sea. It may strike some readers, Gilbert admits, as "an almost ludicrously fairy-tale ending to this story, like the page out of some housewife’s dream." But, she cautions, "I was not rescued by a prince. I was the administrator of my own rescue." And she is right: Part of the great pleasure of "EPL" was observing a woman who willfully and purposely pursued her own bliss with the kind of devotion and discipline others reserve for scoring a Harvard education or a corporate seat. Oddly enough, "Committed" fails when she steps out from behind the screen, Oz-like, and attempts to draw parallels between her experience and the rest of womankind. Gilbert’s trick, it seems, is to seem most universal when she's sticking to her own particulars.