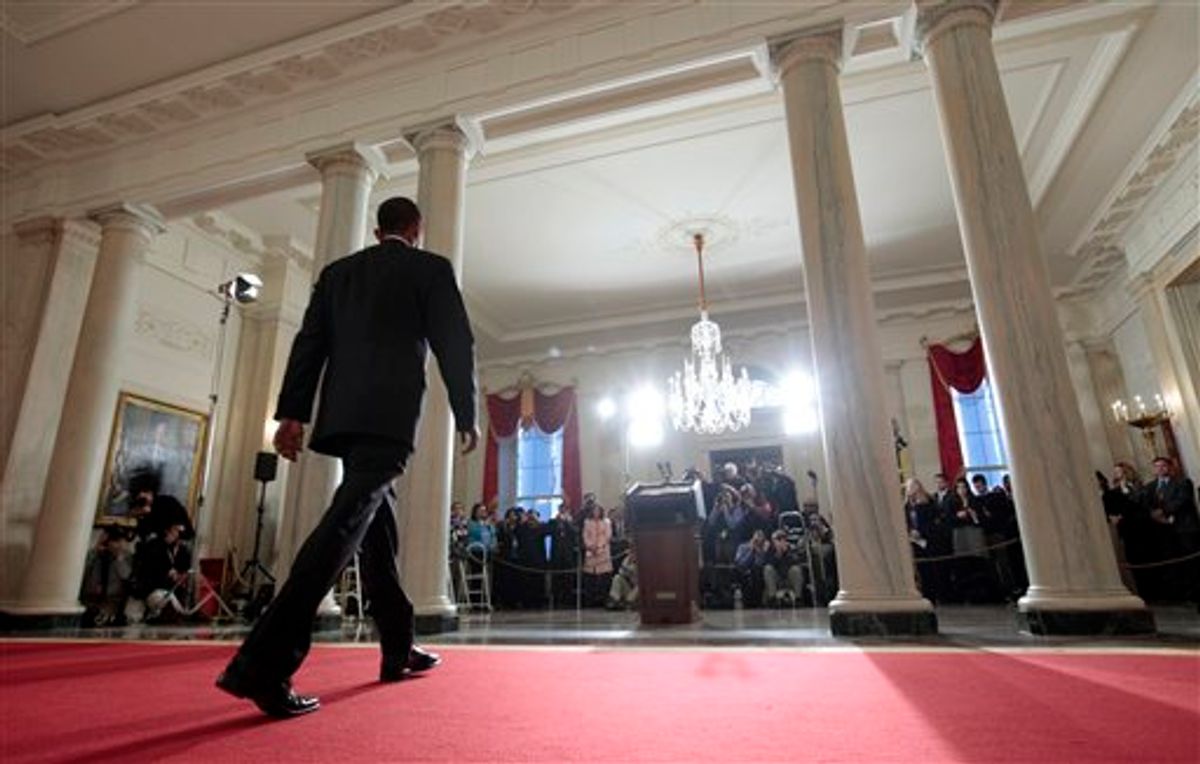 President Barack Obama walks towards the podium to speak about plans to thwart future terrorist attacks after an alleged terrorist attempt to destroy a Detroit-bound U.S. airliner on Christmas Day, Tuesday, Jan. 5, 2010, at the White House in Washington. (AP Photo/Charles Dharapak) (AP)
--

No event in recent memory has stimulated the excitment and interest of Washington political reporters like the release of Mark Halperin and John Heilemann's new book, Game Change, and that reaction tells you all you need to know about our press corps.  By all accounts (including a long, miserable excerpt they released), the book is filled with the type of petty, catty, gossipy, trashy sniping that is the staple of sleazy tabloids and reality TV shows, and it has been assembled through anonymous gossip, accountability-free attributions, and contrived melodramatic dialogue masquerading as "reporting."  And yet -- or, really, therefore -- Washington's journalist class is poring over, studying, and analyzing its contents as though it is the Dead Sea Scrolls, lavishing praise on its authors as though they committed some profound act of journalism, and displaying a level of genuine fascination and giddiness that stands in stark contrast to the boredom and above-it-all indifference they project in those rare instances when forced to talk about anything that actually matters.

This reaction has nicely illuminated what our press corps is.  The book is little more than royal court gossip, churned out by the leading practitioner of painfully sycophantic, Drudge-mimicking cattiness:  Time's Mark Halperin.  And all of the courtiers, courtesans, court spokespeople (i.e., "journalists") and hangers-on who populate our decadent little Versailles on the Potomac can barely contain their glee over the opportunity to revel in this self-absorbed sleaze.  Virtually every "political news" TV show is hyping it.  D.C. reporters are boasting that they obtained early previews and are excitedly touting how intensively they're studying its pages in order to identify the most crucial revelations.  Just try to contemplate how things would be if even a fraction of this media energy and interest level were devoted to scrutinizing the non-trivial things political leaders do.

Revealingly, one of the sections receiving the most attention is the microscopic examination of the sexual proclivities of John Edwards, his marital conflicts with his wife, and their various personality flaws.  That reaction is predictable and, obviously, predicted, which is why the lengthy excerpt they released focuses on those matters. Notably, the Edwards scandal was relentlessly pursued and first "broken" by The National Enquirer, and I defy anyone to read the book excerpt on Edwards (to the extent you can even get through it) and identify any differences between the book's tone, content and "reporting" methods and those found in the Enquirer.  Meanwhile, Matt Drudge -- crowned by Halperin and the co-author for his prior book, Politico Editor-in-Chief John Harris, as The Ruler of The World of Political Journalists -- has been (in return) screamingly promoting the book non-stop for days, as has Drudge's cloned, adopted child, Politico.

This is the most revealing aspect of this episode.  The National Enquirer, Matt Drudge and Politico aren't aberrational extremes in our press corps.  As Halperin and Harris correctly noted in calling Washington journalism "The Freak Show," they are at its epicenter, leading the way.  The reason there is such a complete merger of interest among low-life tabloids, Matt Drudge, reality shows and the Washington political press corps is precisely because they are indeed indistinguishable -- merged.  Even for people who thought that John Edwards' sexual activities were relevant when he was running for President or vying for a high administration position, at this point he is a completely destroyed, discredited non-entity with no political future, and mucking around in the life of him and his wife is pure sleazy voyeurism.  Subjecting the Edwards to this sort of vicious, judgmental scrutiny is a cost-free activity, which is why so many are so eager to engage in it.

The real value of a book like this lies in the opportunity it presents for Washington's elite class to distract themselves and everyone else from the oozing corruption, destruction, decaying and pillaging going on -- that these same Washington denizens have long enabled.  With some important exceptions, that is the primary purpose of establishment journalism generally.  Even better, the book lets our media and political elite -- and then the public generally -- feel good about themselves by morally condemning the trashy exploits of Rielle Hunter and the egoistic hypocrisies of the irrelevant John and Elizabeth Edwards.  As The Nation's Chris Hayes so perfectly put it:  "Just when you think the news cycle can't get any stupider, Mark Halperin publishes a book."  All imperial courts -- especially collapsing ones -- love to occupy themselves with insular, snotty trivialities.  As this book and the excitement it has produced demonstrates, providing that distraction is exactly what our press corps most loves to do and what it does best.  The media sleazebags who turned Bill Clinton's penile spots, cigars and semen stains into headline news for two straight years haven't gone anywhere; they're actually stronger and more dominant than ever.