Last shots before the truce: Was LOTR a victim of blockbuster backlash, or a fantasy with nothing to say? 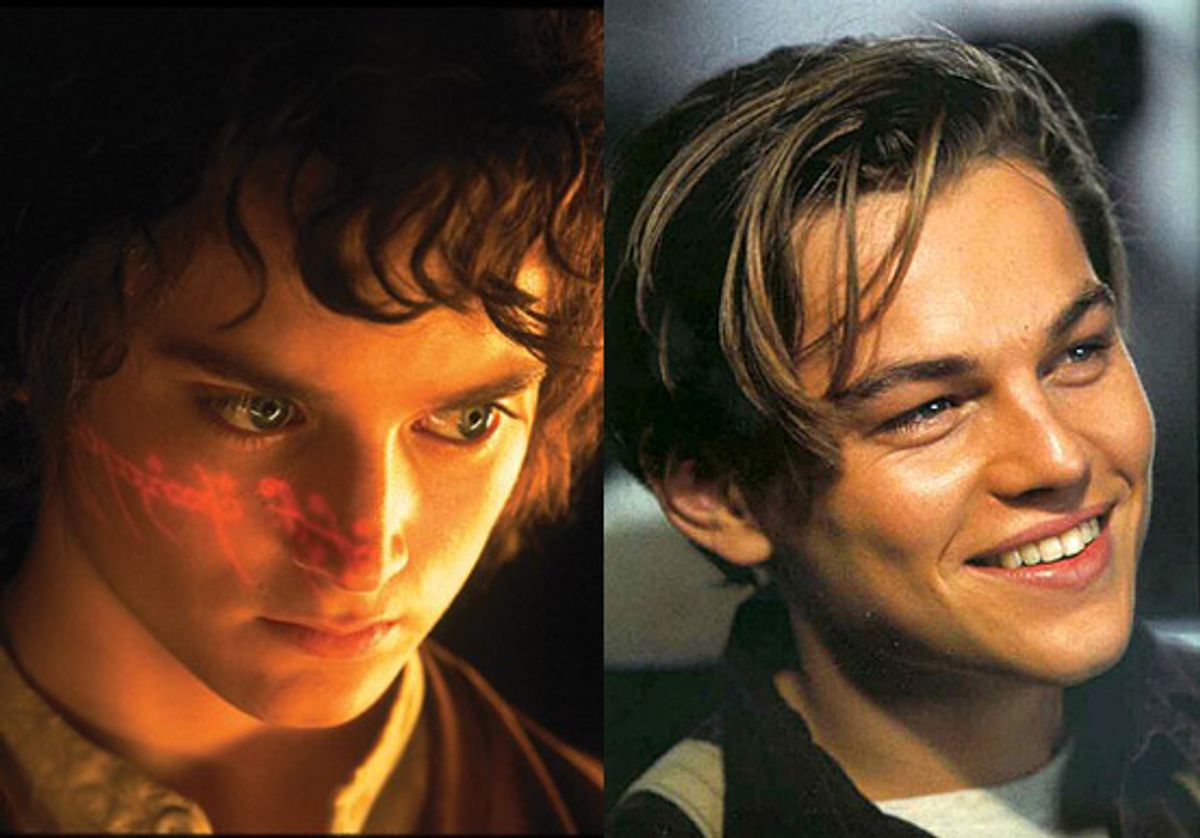 Frodo Baggins (Elijah Wood) in "Lord of the Rings: Fellowship of the Ring" and Jack Dawson (Leonardo DiCaprio) in "Titanic"
--

I'm calling a halt to the debate about whether Peter Jackson's "Lord of the Rings" trilogy belongs on anybody's list of the greatest films of the 2000s, or whether (as I am beginning to believe) they are, like Tolkien's books, a sui generis accomplishment, in some ways out of step with their times.

But it wouldn't be very bloggy to end without giving each side one more shot, now would it? Reader Troy Blanchard from San Francisco, who describes himself as an admirer of the films and books, delivers an especially pithy summary of why he doesn't feel much need to watch the trilogy again:

I don't really think it has to do with their length, but more with the fact that the films do not speak to a wider truth. For example, "The Godfather" is not really about the Mafia; it's an examination of the nature of capitalism and revenge. There is something very universal about the Corleone saga, and every time I've seen that movie and the sequel, I notice something different and have a different reaction. The LOTR movies are just about hobbits, wizards, elves and the rest. That's it. They do not offer us any insight into human nature or our culture. There is no desire to see them again because there is nothing else to see aside from what we saw the first time. This doesn't mean they are bad or not entertaining; they just fail to produce a deeper meaning that creates new insights and emotions over the years.

But since I've been stingier about pro-LOTR responses, let's give the last word to Open Salon blogger and Film Salon contributor Scott Mendelson (whose weekly box-office reports will become a regular feature here). Scott writes that while he picked "Meet the Robinsons" as his personal favorite for our Films of the Decade list, LOTR remains "the most impressive and astounding cinematic accomplishment of the last decade":

It's called "blockbuster backlash," and it's not a new phenomenon. I actually found an essay I wrote in early 2005 about this, which stated that "the Lord of the Rings backlash has only recently started." Can you find anyone, film critic or otherwise, who still admits to loving or even liking "Independence Day," "Jurassic Park," "Titanic" or the "Lord of the Rings" series? Someone did back in the day, as those films made tons of money, back in the olden days when it wasn't so easy to gross $200 million, let alone $300-$600 million. But since it's considered uncool to like something so beloved by the masses, blockbuster backlash has set in, swinging the pendulum in the other direction. What starts as "Oh, it wasn't that great" quickly turns into "That movie was terrible." The tide of critical opinion almost immediately turns, so that the focus on these films revolves purely on the technical merits, with snide disdain at the idea that the films succeeded for any reasons related to character, story or craftsmanship.

"Oh, those films were just about the battle scenes," says someone who bawled like a baby during the finale(s) of "Return of the King." "Oh, it was just the groundbreaking FX of the dinosaurs," says another who gripped their seat in terror during the raptor kitchen attack in "Jurassic Park." We immediately forget that these films were not only popular with the masses, but with the critics too. "Titanic" received rave reviews upon its release. "Jurassic Park" received solid notices too. And each of the "Lord of the Rings" films was greeted with a wave of "I can't believe Peter Jackson pulled this off" hysteria, to the point that "Return of the King's" Oscar triumph was a foregone conclusion. Just you wait: The tide is already starting to turn against "The Dark Knight" ("It only made so much money because Heath Ledger died"), and I can only presume that "Avatar" is next on the chopping block ("People only went because of the 3D effects," which explains why "Captain Eo" was the century's top-grossing film).

This isn't a case of people who disliked the film from the get-go voicing their opinions louder than everyone else. This is a case of mass amnesia that renders any prior smash hit as something to be disdained by the critical elite, which then filters down to the general public.