An Iranian nuclear physicist is murdered

Much more light should be shined on covert U.S. actions inside that country 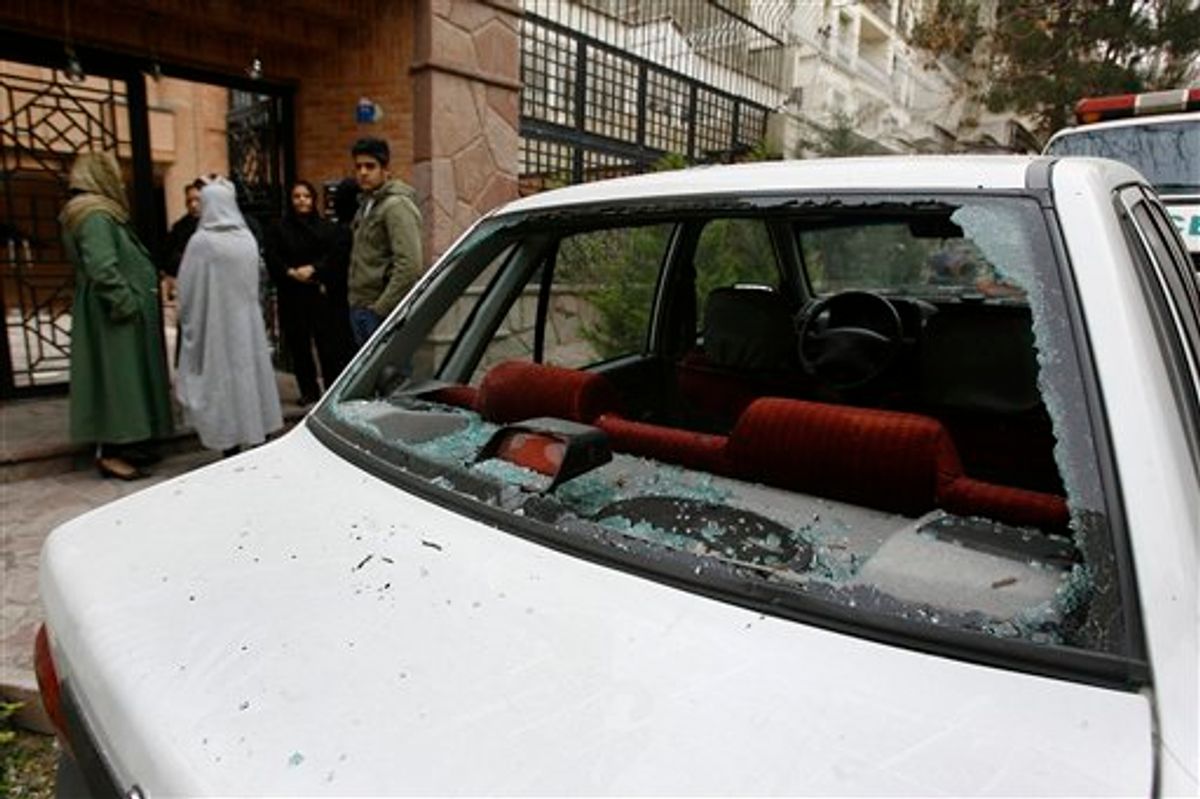 The window of a car is shattered after a bomb blast which killed Iranian nuclear physics professor Massoud Ali Mohammadi, in front of his house, in northern Tehran's Qeytariyeh neighborhood, Tuesday, Jan. 12, 2010. A nuclear physics professor at Tehran University was killed Tuesday by a bomb-rigged motorcycle parked outside his home in Iran's capital, state media reported. (AP Photo,ISNA,Mona Hoobehfekr) (AP)
--

Back in February, 2007, a controversy erupted when University of Tennessee Law Professor Glenn "Instapundit" Reynolds advocated that, in response to Iran's nuclear activities, the U.S. should be "killing radical mullahs and iranian [sic] atomic scientists" -- in other words, have the U.S. Government select religious leaders and scientists it dislikes in Iran and just murder them, despite long-standing domestic and international legal prohibitions on exactly such programs.  Today, an Iranian nuclear scientist and professor at Tehran University, Massoud Ali Mohammadi, was killed when "when a bomb strapped to a motorcycle was triggered by remote control outside his home in the northern Tehran neighbourhood of Qeytariyeh."  Mohammadi taught neutron physics and "was the author of several articles on quantum and theoretical physics in scientific journals," though the extent of his involvement in Iran's nuclear program is unclear.

Although the Iranian government has issued a statement blaming the U.S. and Israel for this rather sophisticated and well-executed assassination, there is no actual evidence yet of who is responsible.  It's possible that the killing is related to Iran's complex internal conflicts rather than its nuclear program.  There is, however, ample evidence that the U.S. covertly provides various means of support to extremist groups which have previously carried out violent terrorist attacks inside Iran -- which, in other contexts, is called being a "state sponsor of terror."  In the very recent past, other Iranian nuclear scientists and officials have disappeared and ended up in the custody of the U.S. and its allies -- either abducted or defected, depending on who you believe.

Whatever else is true, this murder of Professor Mohammadi is rather clearly an act of pure terrorism.  As Kevin Drum wrote of Reynolds' proposal:

Killing civilian scientists and civilian leaders, even if you do it quietly, is unquestionably terrorism. That's certainly what we'd consider it if Hezbollah fighters tried to kill cabinet undersecretaries and planted bombs at the homes of Los Alamos engineers. What's more, if we took this tack against Iran, we'd be doing it for the same reason that terrorists target us: because it's a more effective, more winnable tactic than conventional war.

Just as is true of our covert military actions in Pakistan, Somalia and Yemen, the extent of our involvement with Iranian extremist groups remains undiscussed by our Government, notwithstanding the numerous public, credible reports detailing some of it, including -- as Seymour Hersh put it -- "the Democratic leadership’s agreement [in 2007] to commit hundreds of millions of dollars for more secret operations in Iran."  As Hersh wrote regarding a Presidential Finding signed by George Bush "designed to destabilize the country’s religious leadership," which included "plans involving possible lethal action inside Iran":

"The oversight process has not kept pace -- it’s been coöpted" by the Administration, the person familiar with the contents of the Finding said. "The process is broken, and this is dangerous stuff we’re authorizing."

Shouldn't much more light be shined on these questions and, specifically, on the question of what our actions are inside Iran?  The Iranian Government routinely blames the U.S. and the CIA specifically for any instability and violence, claims which understandably resonate among a citizenry which knows the CIA overthrew its democratically elected government in 1953 and then proceeded for decades to prop up its brutal dictator.  Those claims now, whether true or not, continue to redound to the benefit of the Iranian regime precisely because our policies are so secret and opaque, our media so uninterested in what our Government is doing, and the citizenry trained to accept that most of the significant actions should take place without its knowledge, let alone any debate or vote.  Whether the U.S. is involved in any way with actions like the murder of this scientist -- whether directly or through its support for Iranian extremist groups -- is genuinely unknown, but the question merits much more attention than it's likely to get.

The Washington Post's Anne Applebaum writes a whole column today correctly observing that many Islamic extremists -- including Terrorists -- are well-educated, wealthy, sophisticated intellectuals -- sometimes even quite Westernized -- yet, to her apparent befuddlement, remain vehemently "anti-American."  Though she calls on the U.S. to fund programs to more actively promote "counter-arguments" to their animosities, there is, as usual, absolutely no discussion of why people like that would develop anger so intense towards the U.S. that it would cause them to give up their own lives to slaughter innocent civilians.  It is, by definition, impossible to develop effective "counter-arguments" when one remains petrified even of acknowledging, let alone discussing and engaging, the "arguments" of the other side.

UPDATE:  The New York Times has now added the following qualifier to its story:  "There was some dispute about his field of scientific specialization."  The AFP story to which I linked above bore this headline:  "Iran nuclear scientist killed in bomb blast" and reported:  "A leading Iranian nuclear scientist was murdered in Tehran on Tuesday in a rare bomb attack."  The BBC suggests that his focus was not in nuclear physics, while Fox News claims that in "1992, he received the first doctorate in nuclear physics to be awarded in Iran, from Tehran's Sharif University of Technology."

As I noted, there are many questions and few answers about this incident and, as I wrote:  "It's possible that the killing is related to Iran's complex internal conflicts rather than its nuclear program."  But these are the questions that ought to be asked of, and answered by, the administration.  According to Fox:  "In Washington, State Department spokesman Mark Toner denied the charge.  'Any charges of U.S. involvement are absurd,' he said. Israel's Foreign Ministry had no comment."

UPDATE II:  A new article from The Washington Post -- under the headline:  "Iranian nuclear physicist killed in bombing" -- provides many more details on Mohammadi's work.  Despite that provocative headline and the Post's calling him "an Iranian nuclear scientist" in the first sentence, the article provides additional facts for doubting any direct involvement in Iran's nuclear program.  The preponderance of evidence seems to suggest that he was a theoretical physicist, or particle physicist, unlikely to have been involved in any nuclear research for the government.  The Post article, however, also includes facts refuting the claim from many of the Iranian regime's most vocal critics that Mohammadi was an opponent of the regime and supporter of Mousavi (thus implying that it was the Iranian government itself which killed him):

Colleagues who worked closely with Ali-Mohammadi described him as a serious scientist who had no interest in politics. "He completely immersed in his research and teaching," one colleague said. "If he had any political ideas, they were so well kept secret that none of his colleagues or students were aware of it."

Ali Maghari, the head of Tehran University's science department, also told the semiofficial Mehr news agency that Ali-Mohammadi "was not political and had no political activities."

The Post article also includes some innuendo that because Mohammadi belonged to a federation of scientists that included some Israelis, he may have been killed by the Iranian government as retaliation.

There's a tendency in situations like these to interpret events to bolster one's pre-existing views and agendas, which is why I included as many caveats as I possibly could about the complete lack of meaningful knowledge about what happened here.  My central point was -- and is -- that the U.S. has clearly been covertly involving itself in Iran's internal affairs, either directly or through extremist proxies, and it is this secret involvement which (a) bears much more scrutiny and (b) enables the Iranian regime to credibly blame instability and violence on the U.S.

UPDATE III:  Law Professor Paul Campos asks an excellent two-part question that gets to the heart of much that is being discussed here.