The case for economic rights

FDR said it and it holds 66 years later: There are benefits and opportunities every American should expect to enjoy 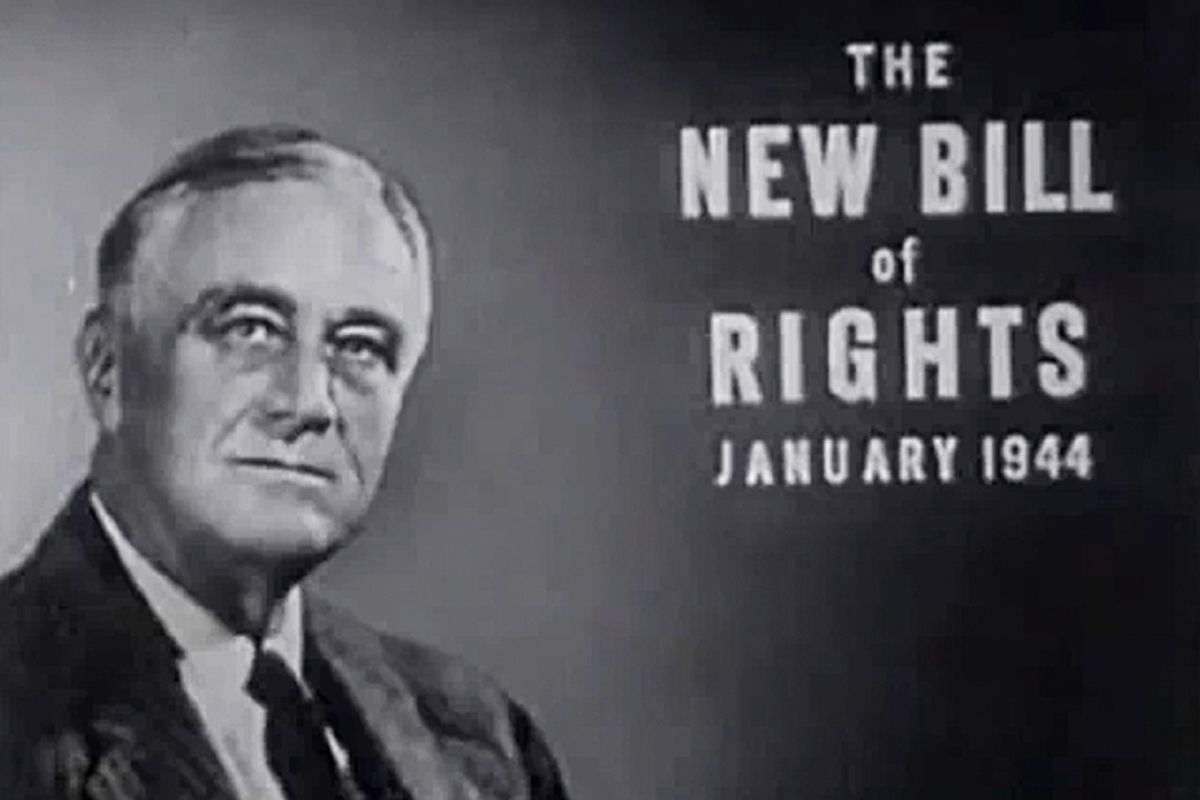 Three score and six years ago, the greatest president of the 20th century gave one of his greatest speeches. On Jan. 11, 1944, in a State of the Union address that deserves to be ranked with Lincoln's "Gettysburg Address" and King's "I Have a Dream" speech, President Franklin D. Roosevelt called for recognition of a "Second Bill of Rights." According to FDR:

"This Republic had its beginning, and grew to its present strength, under the protection of certain inalienable political rights -- among them the right of free speech, free press, free worship, trial by jury, freedom from unreasonable searches and seizures. They were our rights to life and liberty. As our nation has grown in size and stature, however -- as our industrial economy expanded -- these political rights proved inadequate to assure us equality in the pursuit of happiness."

Roosevelt did not argue that economic rights had superseded basic, old-fashioned political and civil rights. The argument of authoritarians and totalitarians that economic rights are more important than non-economic liberty was abhorrent to him. Instead, with the examples of the fascist and communist regimes of his time in mind, he argued that the purpose of economic rights was to support and reinforce, not replace, civil and political liberties:

"We have come to a clear realization of the fact that true individual freedom cannot exist without economic security and independence. 'Necessitous men are not free men.' People who are hungry and out of a job are the stuff of which dictatorships are made.

In our day these economic truths have become accepted as self-evident. We have accepted, so to speak, a second Bill of Rights under which a new basis of security and prosperity can be established for all -- regardless of station, race, or creed."

President Roosevelt was not promoting economic rights that were necessarily enforceable in court, but rather economic benefits and opportunities that every American should expect to enjoy by virtue of citizenship in our democratic republic. Many of the rights he identified have been secured by programs with bipartisan support. These include "the right to a good education" (the G.I. Bill, student loans, Pell Grants, Head Start, federal aid to K-12 schools) and "the right of every family to a decent home" (federally subsidized home loans and tax breaks for home ownership). But even before the global economic crisis, the U.S. fell short when it came to full employment -- "the right to a useful and remunerative job in the industries or shops or farms or mines of the nation" -- and a living wage -- "the right to earn enough to provide adequate food and clothing and recreation."

Roosevelt's vision was controversial at the time and is contested today. When it comes to providing a safety net for Americans, there are three distinct paradigms, which I would describe as economic citizenship, welfare corporatism and faith-based charity.

Supporters of faith-based charity among "theoconservatives" such as Marvin Olasky argue that modern social insurance like Social Security and Medicare was a mistake. The medieval British and colonial American systems of relying on religious institutions to care for the sick and poor should have been continued and built upon, with government subsidies to "faith-based institutions."

The secular business-class right, however, has shown little interest in faith-based charity, perhaps because it is difficult for rent-seeking bankers, brokers and other private sector actors to extract huge amounts of money from tax-exempt church hospitals and church soup lines. The right's preferred alternative to the progressive vision of economic citizenship is what I call "welfare corporatism." Whereas economic citizenship views protection against sickness, unemployment and old age as entitlements of citizens in a democratic republic, welfare corporatism treats these necessities of life as commodities like groceries or appliances, to be purchased in a market by people who are thought of as consumers, not citizens.

Let's contrast ideal versions of the two approaches. In the ideal America of economic citizenship, there would be a single, universal, integrated, lifelong system of economic security including single-payer healthcare, Social Security, unemployment payments and family leave paid for by a single contributory payroll tax (which could be made progressive in various ways or reduced by combination with other revenue streams). Funding for all programs would be entirely nationalized, although states could play a role in administration. There would still be supplementary private markets in health and retirement products and services for the affluent, but most middle-class Americans would continue to rely primarily on the simple, user-friendly public system of economic security. As Steven Attewell points out, the Social Security Act of 1935 was intended not merely to provide public pensions for the elderly but to establish a framework for a comprehensive system of social insurance corresponding to President Roosevelt's "right to adequate protection from the economic fears of old age, sickness, accident, and unemployment." Attewell writes: "We need to go back to the original drawing board -- the Social Security Act of 1935 -- to finish the job it began and create a truly universal and comprehensive social welfare state."

In the utopia of welfare corporatism, today's public benefits -- Social Security, Medicare, unemployment insurance and, in a few states, public family leave programs -- would be abolished and replaced by harebrained schemes dreamed up by libertarian ideologues at corporate-funded think tanks like the Cato Institute and the Heritage Foundation. Tax subsidies would be funneled to insurance companies, brokers and banks. Social Security would be replaced by a bewildering miscellany of tax-favored personal savings accounts. Medicare would be replaced by a dog's breakfast of tax subsidies for purchasing health insurance and personal medical savings accounts. Unemployment insurance would give way to yet another Rube Goldberg scheme of tax-favored unemployment insurance accounts. As for family leave -- well, if you're not wealthy enough to pay out of pocket for a nanny for your child or a nurse for your parent, you're out of luck.

The strongest case for economic citizenship instead of welfare corporatism is economic. Economic citizenship is more efficient and cheaper in the long run, because the government need only meet costs, while subsidized private providers must make a profit. The Democratic and Republican supporters of welfare corporatism justify their system of massive subsidies for for-profit healthcare and retirement security with the claim that market competition will keep down prices. If only that were true. Competitive markets are probably impossible to create, in the highly regulated insurance sector and the highly concentrated financial sector that sells private retirement goods and services.

It follows that a policy of subsidizing oligopolies and monopolies, via government subsidies to consumers, in the absence of government-imposed price controls, is a recipe for cost inflation, as the providers jack up their prices, sending the consumers back to Congress to demand even more public subsidies. By its very nature, welfare corporatism funnels public resources, in the form of tax breaks, to rent-seeking, predatory firms in the FIRE (finance, insurance, real estate) sector, with ever-swelling dead-weight costs on the economy. Welfare corporatism equals corporate welfare.

Unfortunately, most progressives have failed to make the case against the libertarian myth of market competition in the provision of social insurance. All too many, including President Obama, have made the too-clever-by-half argument that the public option would keep prices down by means of market competition. In other words, the center-left has borrowed a bogus argument about competition from right-wing free-market fundamentalism in order to defend a token public program that ceased to be of any interest once Obama and the Democrats in Congress ruled that Americans with employer-provided insurance would be banned from joining the public option. When you're reduced to parroting the opposition's erroneous theories, in the process of begging for a slight modification of the opposition's pet program, you clearly don't have the nerve or the patience to play the long game in politics.

In a response to one of my earlier columns, Will Marshall wonders how I can dare to criticize the legacy of Bill Clinton, a Democrat. My reasons should be clear by now. I am not a partisan Democratic operative focused on winning the next election. I am interested only in strengthening the republic through a gradual expansion of economic citizenship in the tradition of Franklin Roosevelt's Second Bill of Rights. If this means criticizing Democratic presidents who expand welfare corporatism instead of economic citizenship, so be it.

As part of his opportunistic policy of triangulation between his own party and the opposition, Bill Clinton joined the Republicans in a three-pronged assault on New Deal economic citizenship. He and the Republican Congress abolished Aid to Families With Dependent Children, a flawed and unpopular means-tested program for the poor that should have been reformed as a national program rather than turned over to the states as the neo-Confederate right insisted. Instead of piecemeal expansion of single-payer healthcare, Clinton pushed a version of employer-based welfare corporatism plus subsidies that came out of the playbook of moderate Republicans like Nixon. And we now know that Clinton secretly agreed to support Newt Gingrich's drive to partly privatize Social Security, in return for dedicating the federal government's imaginary future surpluses to what was left of Social Security. In 2005, Will Marshall argued in favor of private accounts, on the grounds that they would soften up Americans for cuts in Social Security: "If today's workers start saving and investing more in stocks and bonds, the returns they earn would allow us to trim their Social Security benefits later, without reducing their overall standard of living."

While George W. Bush pushed for partial privatization of Social Security, he failed because of massive public opposition. But Bush and the Republican majority in Congress succeeded in enacting the Social Security drug benefit, a flawed but genuine expansion of economic citizenship. Clinton is the only president to have successfully supported the destruction of a New Deal entitlement, while Bush presided over the greatest expansion of the Rooseveltian entitlement system since Lyndon Johnson passed Medicare.

For his part, Barack Obama, like Bill Clinton, rejected single-payer in favor of a moderately conservative welfare corporatist approach to healthcare reform. In contrast, Obama's proposal for student loan reform, an idea discussed in the Clinton years, would move in the right direction, away from welfare corporatism and toward economic citizenship, by replacing subsidized third-party lenders with direct government provision of student loans to needy college students.

Parties are coalitions of interest groups, they are not public philosophies, and presidents, great and minor, are and have to be opportunists. In contrast, reformers only have a chance of succeeding if they stick to their basic principles and keep their eyes on the prize. Progressives should support any politician, Democrat or Republican, who expands economic citizenship to the detriment of welfare corporatism, and they should oppose any politician, Democrat or Republican, who expands welfare corporatism to the detriment of economic citizenship.