The massive Wall Street bonanza was caused by corporatism and crony capitalism. 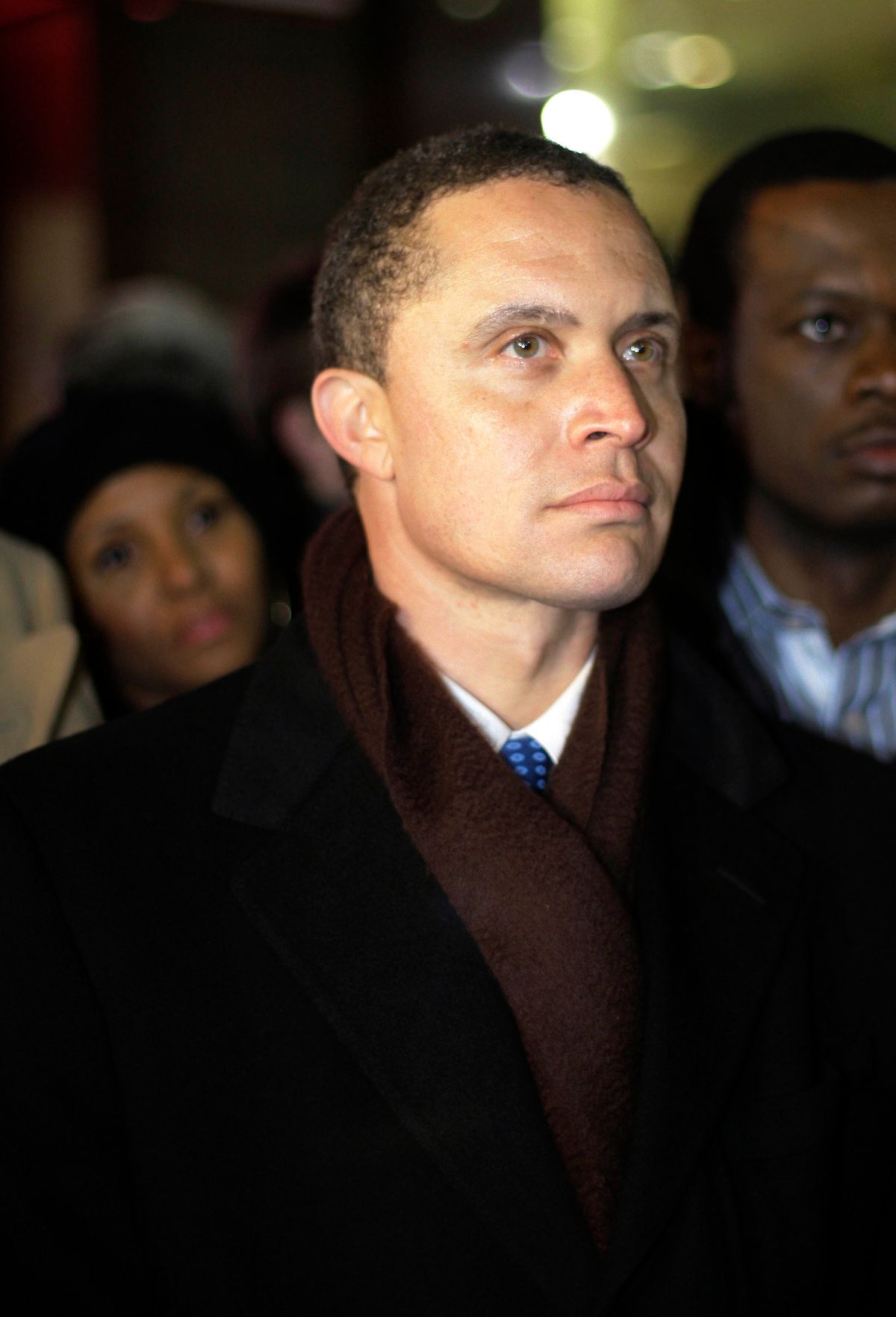 Harold Ford looks on before a vigil to pray for Hatian earthquake victims outside near the Hatian Consulate Wednesday, Jan. 13, 2010 in New York. (AP Photo/Frank Franklin II) (Frank Franklin Ii)
--

The incomparably horrific Harold Ford -- who sounds ready to challenge incumbent New York Democratic Sen. Kirsten Gillibrand in a primary -- contradicted himself so egregiously in his cringe-inducing New York Times interview yesterday that it's hard to know whether one should feel more pity or contempt for him.  First, there's this:

Mr. Ford declined to discuss what he is paid by the bank [Merrill Lynch, of which he is Vice Chairman], but publicly available data suggests that he earns at least $1 million a year. Asked what role outsize pay packages played in fueling the financial crisis, Mr. Ford said he objected to capping executive compensation on Wall Street. "I am a capitalist," he said. "I believe that people take risk, and there are rewards if they do well; they should lose if they don't."

But that was preceded by this:

[Ford] blasted [Gillibrand] . . .  for opposing the taxpayer bailout of the financial industry. "It was a mistake," he said, noting that most Wall Street firms had already paid back the money. "How can you be against ensuring that the lifeblood of your city and of your state survives?"

So the rugged individualist Harold Ford -- who inherited his father's Congressional seat at the age of 26 -- is a self-proclaimed "capitalist" who believes that people "should lose" if they don't do well:  unless, that is, the people who "don't do well" are his funders and controllers on Wall Street, in which case they should be propped up by the U.S. Government with bailouts and loans and Federal Reserve tricks until such time that they can pay themselves tens of millions of dollars in bonuses, at which point they should be left alone in the name of "free market capitalism" and keeping the Government out of the affairs of industry and away from their "rewards."  What Ford is advocating, of course, is the exact opposite of free market capitalism:  it's risk-free crony "capitalism," warped corporatism, the essence of decaying emerging-market nations in crisis, in which the coercive power of the Government is harnessed by a corrupt financial elite for its own benefit and at everyone else's expense, to ensure that people like Harold Ford can maintain their chauffeurs and weekly pedicures and helicopter rides he strangely boasted of enjoying.

Digby, a California resident, yesterday detailed the truly monstrous budget cuts being contemplated by that state because of a $20 billion budget shortfall, including "200,000 children off low-cost medical insurance, end in-home care for 350,000 infirm and elderly citizens and slash income assistance to hundreds of thousands more."  Of those residents eliminated from health care coverage, she writes:  "These patients will logically be coming into the already stretched emergency rooms, costing far more money, so the only real purpose here must be to let them die."  And nationally, of course, the unemployment crisis, bringing with it extreme levels of human misery, continues unabated.

Last night, Digby noted that banking CEOs are becoming increasingly vocal in complaining about the "unfairness" of criticisms directed to them, but as she says:  "they should shut their pie holes and be very, very grateful that that's all that's being done."  Indeed, given the extraordinary disparity between the government-enabled Wall Street bonanzas and the government-caused financial suffering for most everyone else, it really is somewhat mystifying that there's not only so little populist rage, but no outright disruptive protests.  There probably are many reasons why that is so, beginning with a citizenry trained to accept its own helplessness and impotence against a seemingly omnipotent financial and political elite, but this is exactly the sort of gaudy pillaging and resulting wealth inequalities which have produced serious disorder in the past.  As Simon Johnson put it in his seminal Atlantic article comparing the U.S. in 2009 to collapsing emerging-market nations of the last couple decades:

Squeezing the oligarchs, though, is seldom the strategy of choice among emerging-market governments. Quite the contrary: at the outset of the crisis, the oligarchs are usually among the first to get extra help from the government, such as preferential access to foreign currency, or maybe a nice tax break, or -- here’s a classic Kremlin bailout technique -- the assumption of private debt obligations by the government.  Under duress, generosity toward old friends takes many innovative forms. Meanwhile, needing to squeeze someone, most emerging-market governments look first to ordinary working folk -- at least until the riots grow too large.

The American public doesn't appear to react that way.  A primary reason for this acquiescence is probably found in the blatant deceit of Harold Ford's comments.  Americans have been taught for so long that the Joys of Capitalism are unchallengeable even when they result in great disparities, and that those who enjoy its fruits do so because they deserve it.  As Ford said:  "I believe that people take risk, and there are rewards if they do well."  That would be all well and good if that were actually what was happening.  But it isn't.  The people who own the Government operate without risk and with the full protection of the coercive political power they have come to own.  The rules are rigged completely in their favor, and (with some rare exceptions) the obscene rewards of today are anything but well-earned, anything but the by-product of "risky" entrepreneurialism.  It's obviously possible to sell some pretty blatant lies to an apathetic and passive public, but the one that Ford and his funders are peddling here -- these huge Wall Street bonuses are the joyous by-product of fair and rugged "capitalism" -- seems a bit too blatant to be sustained.

In addition to comments like these, what made Ford's interview so stomach-turning to read was his willingness to say the exact opposite of what he so stridently said during his unsuccessful run for the Senate in Tennessee just three years ago.  He's hardly alone in that regard -- Ford's likely primary opponent, Kirsten Gillibrand, instantaneously transformed from right-wing, lobbyist-serving House Blue Dog Democrat into Good Loyal Doctrinaire Progressive upon being appointed to her Senate seat -- but Ford is particularly unskilled in hiding his soullessness.  It's just a reminder that most national politicians are so desperate for the petty perks of power that they're willing to publicly humiliate themselves by making it clear that they believe in nothing and are willing to recite whatever will please those around them and those funding them.  It's creepy and ugly and explains a lot about our political class.

One of the issues on which Ford completely reversed himself is same-sex marriage (he's suddenly for it).  Along those lines, Cato's David Boaz insightfully examines how the U.S. Government bars same-sex bi-national couples from living together in the U.S.  Boaz's piece is a reminder that these "social issues" are more than just abstractions, but genuinely burden people's lives in rather extreme and unjust ways.

UPDATE:  Here's the often-excellent Dylan Ratigan on the role Tim Geithner and his New York Fed played in many of the most extreme events:

UPDATE II:  With all the draconian cuts in the safety net for poor children, the infirm and the elderly described by Digby, it's at least reassuring to know that we have the money for what really matters:

President Barack Obama will ask Congress for an additional $33 billion to fight unpopular wars in Afghanistan and Iraq on top of a record $708 billion for the Defense Department next year, The Associated Press has learned - a request that could be an especially hard sell to some of the administration's Democratic allies.  The extra $33 billion in 2010 would mostly go toward the expansion of the war in Afghanistan.

It's interesting how, even in times of the most acute financial crises, certain sectors not only get what they want, but more.