I'm reading "Game Change," and I can't help wondering about sourcing holes -- and why women are the worst villains 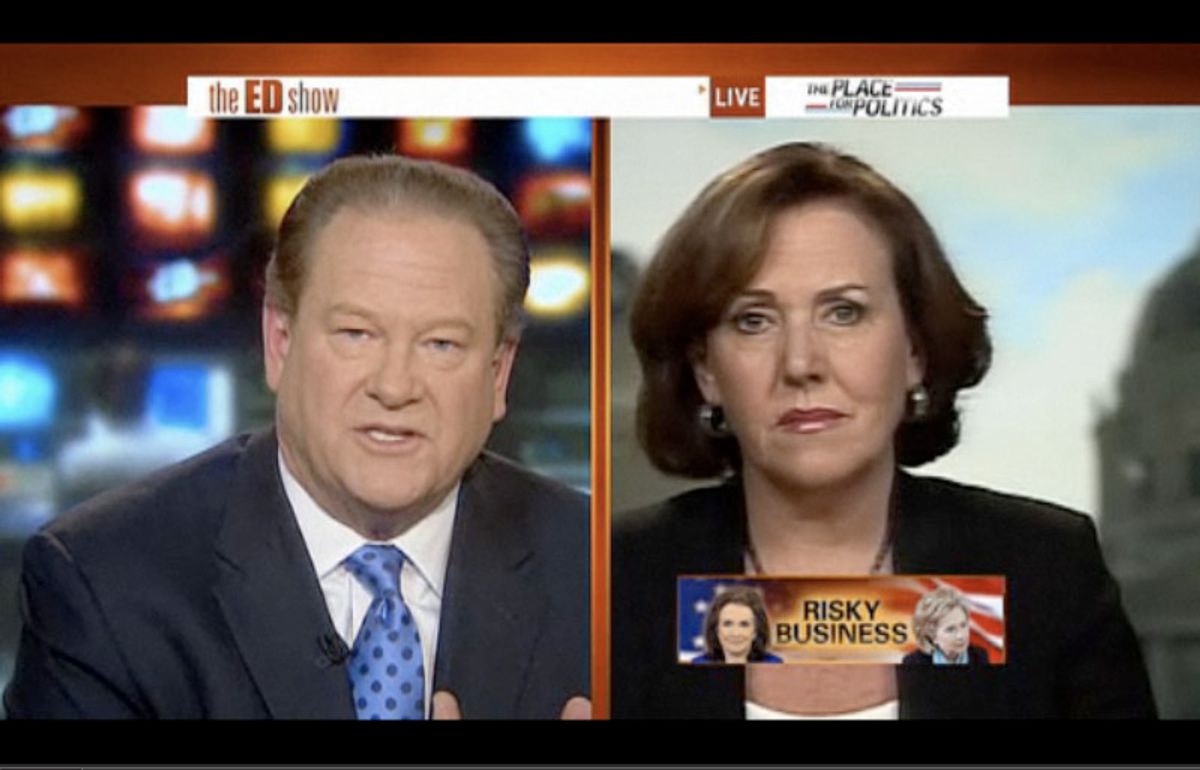 I went on MSNBC's "The Ed Show" Tuesday to talk about health care reform, but somehow the conversation turned to "Game Change," John Heilemann and Mark Halperin's breathless new book about the last election. I shouldn't have been surprised; MSNBC particularly has been all "Game Change," all the time since last week.

On Sunday I wrote about the book's "revelation" that Senate Majority Leader Harry Reid used the term "Negro dialect" referring to Barack Obama. I wrote then about my discomfort with the book's mostly anonymous sourcing – there is no index or source notes – as well as its strange practice of "quoting" inflammatory statements in mere sentence fragments, without full context, and Heilemann and Halperin's Bob Woodward-like zest for recreating thoughts and conversations they couldn't have been a party to. (I particularly enjoyed the opening scene, set in Obama's room at a Des Moines Hampton Inn just before the Iowa caucuses, when the candidate woke up anxious in the middle of the night, feeling like "the dog that caught the bus." Were they there? Now that's a story!) I have the book, and I'm making my way through it, but I'm surprised more people aren't asking the questions I have about it. And that's what I told Schultz, somewhat to his surprise.

In what may be the most damaging "revelation" of all – that former President Clinton told Sen. Ted Kennedy that just a few years ago, Obama would have been serving their coffee – the incendiary statement, with zero sourcing, isn't even in quotes. None of the words, not even coffee, are in quotes, and given how many zingy words and sentence fragments they toss around in quotes elsewhere in the book, it makes me wonder what they're shaky on. Did Clinton say "coffee?" Or was it tea? Martinis? But that lack of clarity hasn't stopped many other journalists – including my friend Eugene Robinson, who should know better – from serving up the statement in quotes, as though it came verbatim from Clinton and/or Kennedy, and concluding that Clinton was saying Obama should be serving him and Kennedy coffee because he's black, and thus Clinton is a racist.

I'm not revisiting the Clinton-is-racist argument here. I have two points: At a time when we're fighting at least two wars, enduring double-digit unemployment, a controversial health care reform bill may or may not become law, and Haiti just had a devastating earthquake, how could we possibly be talking, nearly 24/7, about a gossipy book that reveals nothing serious about policy, hidden deals, corruption or conflicts of interest along the 2008 campaign trail? And if we must dissect such gossipy revelations, on the grounds that they tell us something about our leadership class (Ed Schultz's defense to me) how can we do so without constantly noting that the book's sourcing is stunningly opaque – about a topic on which all sources had a skewed, self-interested take on the "history" they recount?

On Tuesday I most objected to Schultz suggesting that Elizabeth Edwards may be even more to blame than her husband John for supporting his decision to continue to campaign for president even after his affair with Rielle Hunter was known. How do I count the ways that is wrong? John Edwards was both the candidate as well as the philanderer, who even after he'd lost, tried to strike a deal with Obama to become his vice president – and his terminal-cancer-stricken wife, who might have been clinging to the campaign to protect her from the pain of her husband's infidelity and her likely death, is worse than he is? Not surprisingly, Hillary Clinton is also trashed in the book as imperious, bitchy, shrill and insecure, based on anonymous sources from her admittedly dysfunctional campaign. (Read Peter Daou for a staffer's defense of Clinton.) Funny how the worst villains of the book are all women – Mrs. Clinton, Mrs. Edwards and Mrs. McCain (did you know she's alleged to have had an affair?) – along with, of course, Sarah Palin. "Game Change" might have been titled "Four Horsewomen of the Apocalypse" so badly do those four females, two of them not candidates but wives, come off in what is supposed to be the definitive book about Campaign '08. Boy we've cracked that old glass ceiling!

Anyway, I gave my friend Ed an earful. We're a great country; we deserve better coverage of the issues that matter. If you care, I'd gone on the show intending to talk about why I favor some kind of health insurance excise tax, controversial as that is among some liberals and union leaders. The Senate bill is sloppy and could hit too many middle income families. It needs to be fixed. But real reform requires spending less on both insurance and medical care, and a tax on expensive plans is one way to discourage overspending, although it should only hit high earners with true luxury plans. Maybe I'll get to talk about that some other time.