The best interests of the fetus

Florida gave Samantha Burton's "unborn child" its own doctor and legal representation,while she got nothing 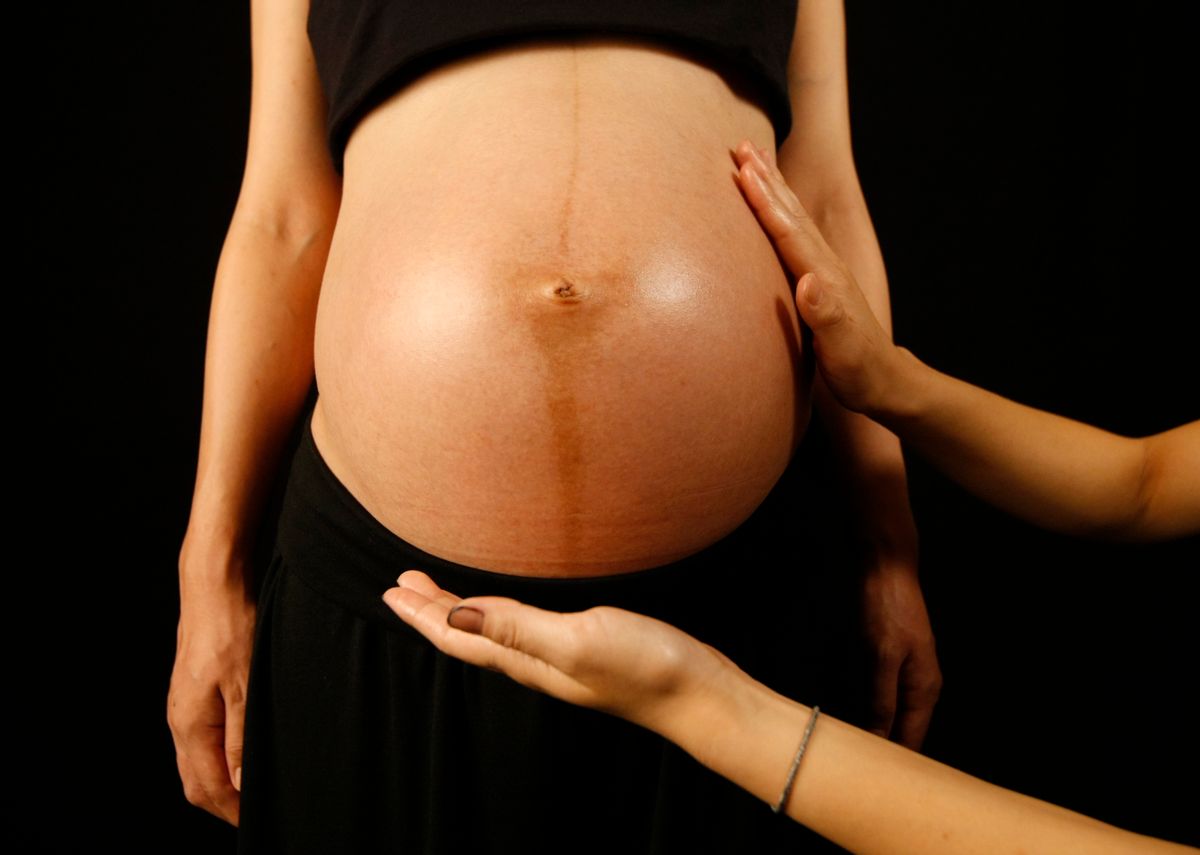 An employee applies massage oil on the bare belly of a pregnant client before her photo shoot at maternity photo studio "Ixchel" in Tokyo July 31, 2009. An increasing number of women who have just one child later in life are flocking to photo studios to have their pregnant bellies photographed to celebrate their bodies during a once-in-a-lifetime experience. Picture taken July 31, 2009. To match Reuters Life! story JAPAN-MATERNITYNUDES/ REUTERS/Kim Kyung-Hoon (JAPAN SOCIETY ODDLY) (Reuters)
--

In Florida, the state can override parents' right to make medical decisions for their own children "to ensure that children receive medical treatment which is necessary for the preservation of their life and health." Given the number of children who have died of curable illnesses because their parents' religious beliefs prevented them from seeking treatment, I can't argue with that. But what about when that "child" is actually a fetus, and protecting its best interests means violating a grown woman's privacy, liberty and right to make her own medical decisions? You guessed it: At least one court decided that the woman's constitutional rights should be suspended to protect her "unborn child."

In March 2009, Samantha Burton was 25 weeks pregnant and at risk of miscarrying. A doctor ordered bedrest, but Burton, who had two small children and a job she depended on, said that would be impossible. So the doctor asked the State to intervene and, according to a brief (PDF) filed by the ACLU on Burton's behalf -- the case is currently before the First District Court of Appeals -- "At the State's request, the Circuit Court, Leon County, ordered Ms. Burton to be indefinitely confined, which had her pregnancy gone to term would have been up to fifteen weeks, to Tallahassee Memorial Hospital and to submit, against her will, to any and all medical treatments, restrictions to bedrest, and other interventions, including cesarean section delivery, that in the words of the court, 'the unborn child's attending physician' deemed necessary 'to preserve the life and health of Samantha Burton's unborn child.'" As it happened, Burton was there for three days before the doctors ordered an emergency C-section, only to learn that the fetus had already died.

Can we just take a moment to meditate on the phrase "unborn child's attending physician"? Because oh my god. The fetus gets its own doctor and court protection, but Samantha Burton can just piss off. At the ACLU's Blog of Rights, Diana Kasdan writes that the hearing was carried out with no legal representation for Burton, and when Burton later asked the court if she could at least switch hospitals (Tallahassee Memorial is where she met the doctor who decided he knew what was best for her fetus), she was denied. So, to review, the state took away her right to refuse medical advice, to seek a second opinion, to choose whether to be hospitalized at all and, once that was out the window, to choose where. Essentially, the state abducted and imprisoned a woman against her will, all in the name of fetus' rights -- which, you know, aren't actually a thing. As the ACLU brief says, "To ignore this fundamental constitutional distinction between the state interest in protecting fetal life and its interest in protecting the lives and health of people is to risk virtually unfettered intrusion into the lives of pregnant women." But hey, it's easier to ask for forgiveness than permission -- am I right, state of Florida?

Frankly, I wasn't surprised to hear that the State of Florida had stepped in to override the medical decision-making of a pregnant woman -- unfortunately we have seen that before. What was even more stunning than in other cases was the unlimited breadth of the court order; the complete lack of any consideration of Ms. Burton's constitutional rights or health; and the fact that the hearing had gone forward with no legal or other advocate to represent Ms. Burton...

This view is not only blatantly unconstitutional, it is dangerous. It is hard to imagine any worse approach to helping pregnant women have safe pregnancies and healthy newborns than the one used by the State of Florida in Ms. Burton's case. This is immediately apparent to any woman who has ever been pregnant and any person who has ever supported a family member or a loved one through a pregnancy, especially a difficult pregnancy. It is evident to medical organizations like the American College of Obstetricians and Gynecologists and the American Medical Association, which uniformly oppose the use of coercive measures during pregnancy.

It's immediately apparent to any person who can recognize the difference between a human being and an incubator, in fact. But apparently, an inability to make that distinction won't prevent you from becoming a judge.