"Archer": The spy who shoved me 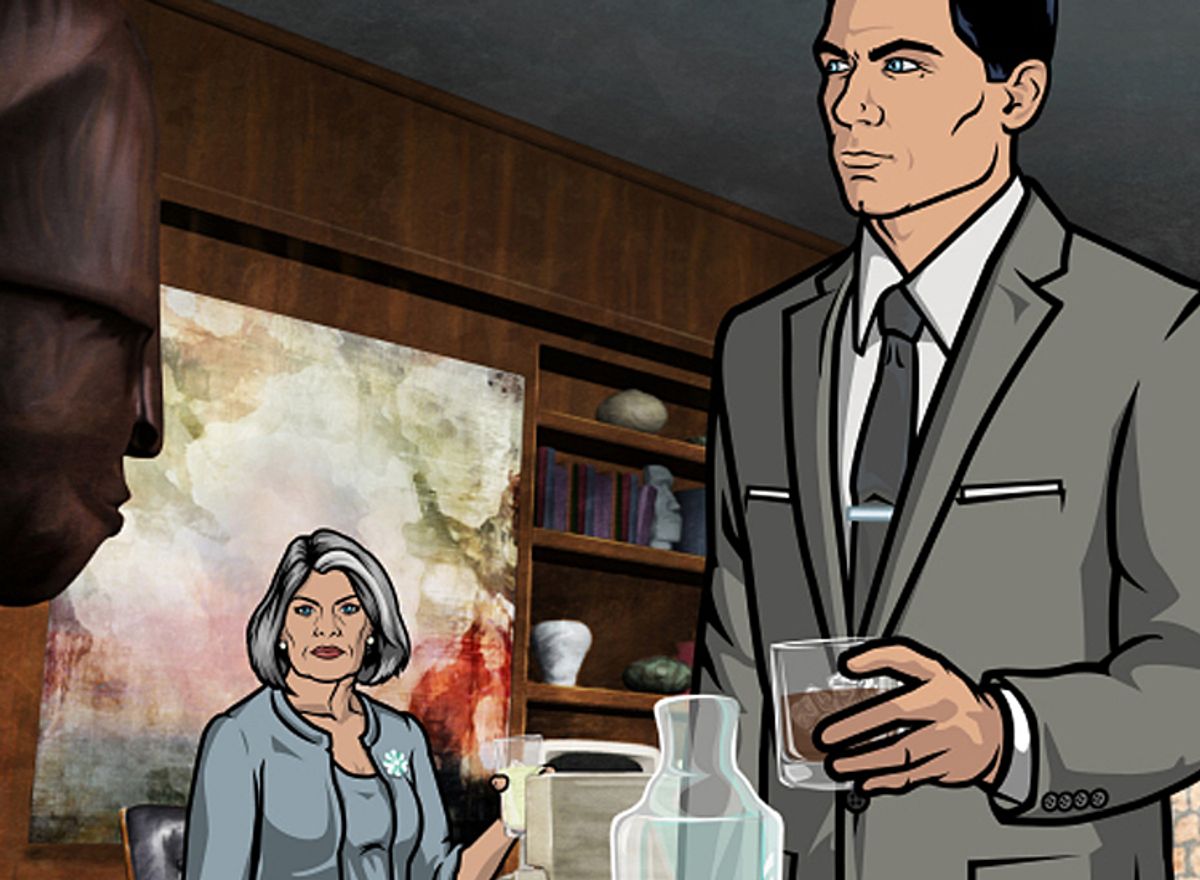 Sterling Archer is a square-jawed international spy who's also a bit of a tool. He hates his bossy mother (who is also his boss). He hates his bossy ex-girlfriend (who is also his co-worker and a fellow spy). He wants his mom to listen to him, and he wants his ex to dump her wimpy boyfriend and take him back. Occasionally, he kills people by accident. ("I'll fetch the rug," offers his butler, Woodhouse [George Coe], in a matter-of-fact tone, as if he's merely fetching the morning paper.)

In other words, Archer is just like James Bond, only he's self-centered, ineffectual, hopelessly arrogant and prone to firing his weapons in the middle of a crowded office. In turn, FX's animated comedy "Archer" (premieres 10 p.m. Thursday, Jan. 14) is just like a James Bond movie, only it's faster-paced, less realistic, more depraved, more mean-spirited, more violent, and it includes lots of potty humor, dirty jokes and cheap shots at Dane Cook.

But even that doesn't completely explain why I love it so much. Maybe it's just refreshing to see something truly repugnant and foolish that doesn't aspire to have even the remotest trace of a redeeming quality. (Some people claimed that HBO'S "The Life and Times of Tim" had that kind of deeply obnoxious charm, but some people were wrong, because that show wasn't nearly funny enough.)

"Archer" is funny. If you don't agree after the first episode, keep watching. You might try drinking a little coffee or having a doughnut before you tune in, though, because the zingers fly by pretty quickly. Take this exchange between Archer (H. Jon Benjamin) and Cyril (Chris Parnell), the current boyfriend of Archer's ex-girlfriend Lana Kane (Aisha Tyler). Archer has been ordered by his mother, the head of ISIS international spy agency, to train Cyril to become a secret agent.

Cyril: Hey, will I get to learn Karate?

Archer: We've got an ex-Mossad guy, he comes in on Thursdays.

Archer: Yeah. Tuesdays he does a really rigorous spin class.

"Archer" is essentially a workplace comedy, replete with inter-office romances and late-night gossip sessions, only the workers typically end up casually killing one or two or a dozen people per episode. This might feel sick and wrong on another show, but thanks to the fact that the stories are farcical and no real human beings end up covered in fake blood, creator Adam Reed (who also created the often very funny Cartoon Network Adult Swim show "SeaLab") is free to be as heartless and twisted as his mood permits.

As a result, Reed and the show's other writers can go nuts with Bond gags galore, like when Archer replaces Cyril's ballpoint pen with one that doubles as a weapon.

Archer: This is what a real field agent uses.

Cyril: Ha. Point's a lot finer than I prefer.

Archer: That's because it's a hypodermic needle, and the cartridge is full of a deadly super-toxin called poiso … caine. Here, keep it in here. (Puts deadly pen in Cyril's breast pocket.) But be careful, the cap slips off for, like, no reason.

This interplay between deadly spy games and mundane annoyances, between half-baked workplace flirtations and sexual three-ways with menacing Russian thugs, between pesky administrative tasks and Mediterranean yachts that get blown to smithereens, is the clinking ice in "Archer's" giant, juvenile tumbler of bourbon.

Chris Parnell is, as always, delightful as the voice of Cyril. More delightful still is Archer's mom, Malory, played by Jessica Walter ("Arrested Development"). Malory seems to spend most of her time disparaging her idiotic son, and Walter's caustic, incredulous voice can make even throwaway lines hysterical.

Malory: I don't want another one of your sullen whores using my medicine cabinet as a Pez dispenser.

Archer: That wasn't her fault! Who puts Oxycontin in a Xanax container?

Archer: But if they're stealing pills, how does it help to switch the labels?

Malory: Because they can't read English!

Now, granted, throwing together these sorts of mean, harsh, dirty or gross jokes with gratuitous violence, bloodshed and a gun-toting, big-breasted cartoon babe is sort of like taking something that's not all that tasty and covering it in melted cheese. Sure, it tastes great, but … it's also delicious.

Actually, I guess there isn't anything wrong with it. Like a hefty serving of melted cheese, "Archer" may leave you feeling slightly queasy, but it's more than worth it.