A big win for the White House: Unions will support healthcare reform, even with a tax on expensive insurance plans 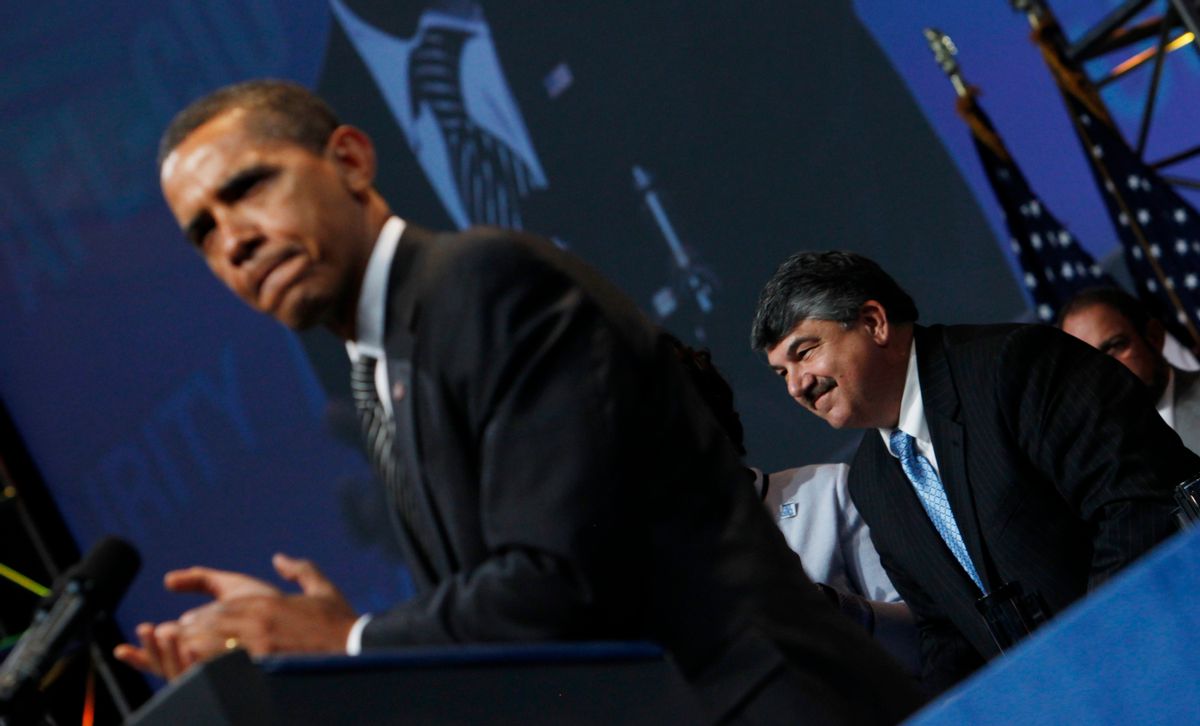 After hours of negotiations at the White House, labor unions agreed Thursday afternoon to support healthcare reform legislation with a tax on expensive insurance plans, a provision they had opposed loudly for months. The deal is a big win for the administration, which managed to dodge a revolt by key allies on President Obama's top domestic policy priority.

So the reform bill inched along, one step closer to passage. "We believe we are going to actually implement a healthcare plan that is good for American families," said Anna Burger, secretary-treasurer of the Service Employees International Union. (White House officials confirmed the agreement not long after labor officials announced it.)

Quite a few more details need to be worked out to combine the bills passed by the House and Senate, but the excise tax was one of the bigger ones. Union leaders were able to soften the tax's impact a bit: It won't take effect until 2013; it will affect plans that cost more than $24,000 per family or $8,900 for individuals, up slightly from the levels in the Senate bill; those levels will be adjusted annually for inflation and adjusted additionally for plans that are expensive because they cover inherently expensive groups, and they won't include the cost of dental or vision plans after 2015; plans worked out through collective bargaining will be exempt from the tax altogether until 2018; and by then, unions in collective bargaining agreements would be able to buy insurance through a new exchange system the legislation would set up, instead of going through employers. (In the years in between, unions could try to renegotiate their contracts to get higher wages instead of so-called Cadillac healthcare plans.) The changes mean the tax won't raise as much money to offset the costs of the bill -- the tax would raise $90 billion over 10 years, instead of $150 billion as the Senate bill had it.

Labor officials talked up those changes Thursday on a conference call with reporters. But in reality, the unions mostly folded. The deal means labor backed down from a threat union leaders made to walk away from the bill over the tax. Unions were also insisting on a public insurance option and a mandate for employers to provide insurance, neither of which look likely to make it into the final bill.

But AFL-CIO President Rich Trumka said Thursday that labor will back the legislation even so. "We've been at this for 60 yrs and we are extremely proud of the constructive role that labor's played in advancing healthcare reform," he said. The White House argued there was no way to pass the bill with everything labor wanted, thanks to conservative lawmakers like Nebraska Sen. Ben Nelson and Connecticut independent Joe Lieberman, who have insisted that the final product of the negotiations stay close to what the Senate passed.

"Negotiations of this kind are obviously filled with compromises on both sides," said American Federation of State, County and Municipal Employees President Gerald McEntee, whose union was one of the fiercest opponents of the excise tax because of the large number of municipal workers who might be subject to it one day. Labor backed down because union leaders decided it was better to pass something now than force the bill to collapse. "We were cognizant of the fact of doing things for all Americans, and particularly, of healthcare for all Americans."

House and Senate members and their aides have been at the White House for the better part of the last couple of days, working on other provisions. Besides the deadline the Obama administration had set for passage -- the State of the Union address -- Democrats are now warily eyeing the Massachusetts Senate race. If Republican Scott Brown wins, the bill would no longer have the 60 votes it needs to pass the Senate. Republicans are already hinting darkly that Democrats will try to delay certification of the election results if Brown beats Martha Coakley, giving interim Sen. Paul Kirk a chance to vote for reform before leaving office.

Still, House Speaker Nancy Pelosi announced Thursday that the final product of the closed-door negotiations over the bill will be posted online for 72 hours before the House votes on it.