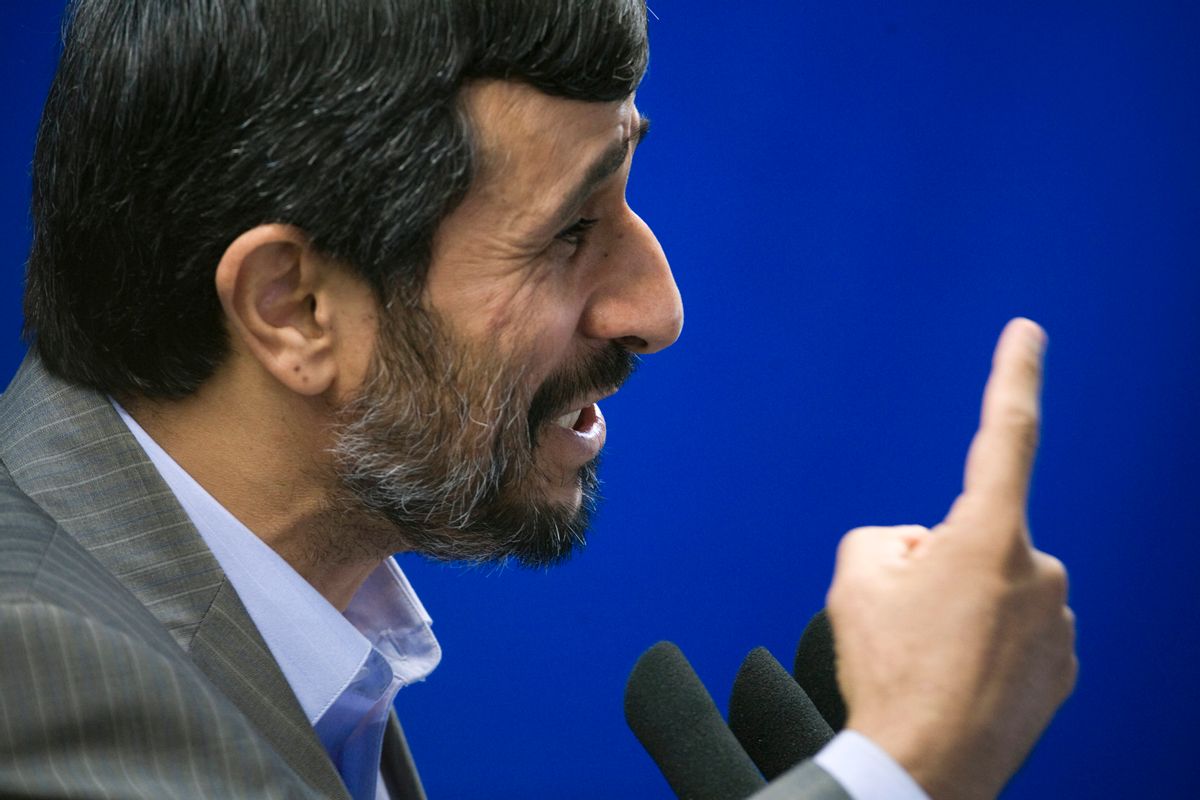 EDITORS' NOTE: Reuters and other foreign media are subject to Iranian restrictions on their ability to film or take pictures in Tehran. Iranian President Mahmoud Ahmadinejad speaks during Friday prayers in Tehran August 28, 2009. Ahmadinejad on Friday called for the prosecution and punishment of the leaders of unrest that erupted after his disputed June re-election. REUTERS/Morteza Nikoubazl (IRAN POLITICS HEADSHOT RELIGION) (Reuters)
--

While American security officials are focused laser-like on the 300 or so al-Qaida members in rural Maarib province of Yemen, and worry about further strikes on the U.S. planned by this small group, a regional food fight has broken out between Iran and Saudi Arabia about a different sort of local insurgency, the Huthis, who have so far not been seen by the U.S. as an international terrorism threat.

Yemen is on the face of it an unlikely object of contention between Shiite Iran and Wahhabi Saudi Arabia. This country of about 23 million in the southwest corner of the Arabian peninsula is about 53 percent Sunni and 47 percent Zaidi. Most of the Sunnis belong to the rationalist Shafi'i school of jurisprudence rather than to the fundamentalist Hanbali school favored by Wahhabis in Saudi Arabia. Many Yemeni Sunnis are traditionalists or even mystical Sufis, schools that the Wahhabi clergy in Saudi Arabia hate.

The Zaidis are a kind of Shiite, though some have seen them as in between Sunnism and Shiism. In Christianity, Roman Catholicism tends to honor Peter more and Paul less, whereas most Protestants foreground Paul. Neither wholly rejects either apostle-- it is a matter of emphasis. Likewise the Zaidis favor Ali (the son-in-law and first cousin of the Prophet Muhammad), but they have nothing against the early caliphs or religious leaders honored by the Sunnis-- Abu Bakr, Umar and Uthman. Zaidis have a doctrine that Ali should have been the first caliph, but the others were also qualified and it was basically all right if Ali was passed over 3 times before he became the leader of Islam in 656 CE. In contrast, Twelver Shiites believe that only Ali and his descendants should have headed up early Islam.

Zaidis often study Sunni works and some have been influenced by Sunni schools of thought. They are more rationalist than the Sunnis in theology, many favoring the Mu'tazili school, which maintained that God is always rational and good in ways human beings can understand, rather than being arbitrary and inscrutable, as many Sunnis insist. Zaidis do not believe that there were only Twelve Imams, or leaders of the Muslim community drawn from the ranks of the descendants of the Prophet, nor do they insist on primogeniture. The Prophets' progeny, or Sayyids, have a special place of honor and often are asked to mediate tribal feuds. Many become clergymen. In each generation, one could become the over-all religious leader or Imam.

Until 1962, Yemen was ruled by a conservative Zaidi Imam, who was ultimately succeeded by young Arab nationalist officers, some of them Zaidis but mostly Sunnis. The current president, Ali Abdullah Saleh, is from a Zaidi background but is an Arab nationalist in the Egyptian mold. He came to power in then North Yemen in 1977, and in 1991 incorporated formerly communist South Yemen into the country. Some southerns are still not happy about that development, fuelling a tribal secessionist movement.

From 2004, an unusually militant group of Zaidis in the northwestern Saada province gathered around Husain Badr al-Din al-Huthi and mounted an insurgency that had strong anti-Sunni and anti-American overtones. Al-Huthi himself was killed in 2004, but his successors fight on. Some reports say that they have become Twelver Shiites, the sort that predominate in Iraq and Iran, who do not at all accept the first three Sunni caliphs.

Because they are now seen as less on the fence between Shiism and Sunnism, and more definitely Shiite, they have attracted moral Support from some Shiites of Iraq and Iran. Grand Ayatollah Gulpaygani in Iran has condemned their treatment. The Yemeni government maintains that the group receives support, as well from the Sadr Movement of Muqtada al-Sadr in Iraq, though this allegation is not proven. In Iraq, some of the members of folk Shiite sects in the north, among the Turkmen and others, have converted to Twelver Shiism in the past 30 years. Some Twelver Shiite clerics may hope to turn the Zaidis, as well, extending their influence and power to the Red Sea.

In recent months, Saudi Arabia maintained that the Huthis had made incursions into Saudi territory and had attacked border checkpoints, and Riyadh responded by bombing them from the air. Al-Jazeera English reported on these strikes:

The Saleh government maintains that the Huthis are both connected to al-Qaida (hyper-Sunni, hates Shiites) and to Iran (Hyper-Shiite, hates al-Qaida). I doubt these claims should be taken seriously. More likely, the movement is a manifestation of local discontents and relatively unrelated to geopolitics.

Iranian hardliners had earlier seemed to want to avoid being seen as supporting a secessionist movement in Yemen, and so most complaints had been on humanitarian grounds.

But yesterday President Mahmoud Ahmadinejad let the Saudis have it with both barrels. He said he was disappointed that Riyadh had turned its weapons on fellow Muslims. And, he tweaked King Abdullah over his dislike of Hamas in Gaza, saying that if Saudi Arms had been applied to intervene against Israel, the Israeli state would have already collapsed. (Saudi Arabia's military capabilities are actually weak, and Israel could wipe the map with the Saudis, so this is just bravado.) Ahmadinejad was grandstanding, painting Iran as loyal defender of the Palestinians and Saudi Arabia as a puppet of the West that spends its time bombing other Muslims for them.

Late in the Bush administration, when attempts were made by Washington to set Saudi Arabia and the Gulf Sunnis against Iran, King Abdullah rejected this approach. He invited Ahmadinejad to Riyadh and tried to keep lines open.

It may be that Iranian hard liners were angered by remarks of the Saudi Foreign Minister earlier this week calling on Iran to allay the concerns of the international community about its nuclear enrichment program.

I saw a clip on Al-Jazeera Arabic of FM Saud al-Faisal replying to Ahmadinejad, reiterating that the Huthis had made incursions into Saudi territory and saying it was none of Iran's business, and then going further and accusing Tehran of interfering in the domestic affairs of Yemen (i.e. of giving arms to the Huthis).

Right about now, the Gulf separating Saudi Arabia and Iran is frozen over, with more inclement weather on the horizon.

You wonder whether the hard liners in Iran, facing substantial domestic opposition, are attempting to provoke bad relations with Riyadh so as to have a local threat that would cause Iranians to rally around the flag.

Addressing the officials of Saudi Arabia, he said Riyadh was expected to play the role of an elder brother in the Yemeni feud instead of entering the war.

"My message to the officials of Saudi Arabia is this: our expectation was that in the domestic quarrels in Yemen they show fatherly conduct or to act as an elder brother. We hoped that they would enter and create peace and friendship between brothers; not to enter the war themselves and deploy mortar and bombs and machine guns against the Muslims.

"The Yemen issue was created by the Americans, British and the Zionists so that the entire Middle East burns in the fire," he said, expressing the hope that the Yemeni groups succeed in solving its domestic problems.

He also urged Pakistani and Afghan officials to be wary of the West's plans.
Addressing Western governments, he said: "You have reached a dead-end, you have reached the end of the road."

He called on Western countries to join the people of the region and help the reconstruction the region. Ahmadinezhad said the West was on its way to destruction and said "the Iranian nation will not allow the ill-omened objectives of Arrogance (West) to be achieved."