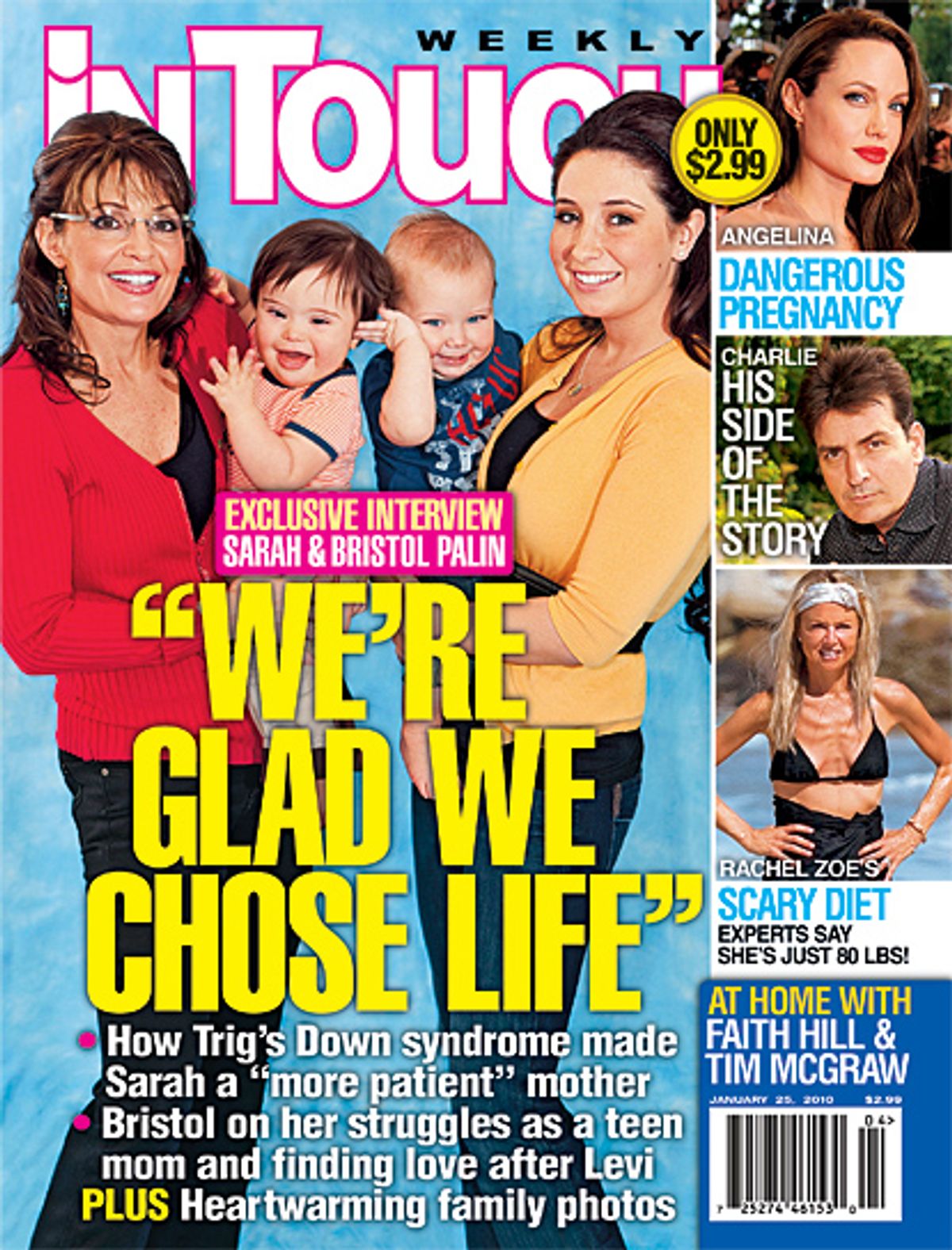 What would the supermarket celebrity magazines do without babies? With their weekly speculation that each bloat is a pregnancy bump and fawning coverage of  the fecund Kardashian and Jolie women -- truly, the pitter patter of little feet must sound more like ka-ching! to their editors' ears. Still, we expected a modicum of tastefulness, even from a magazine best known for its careful consideration on Robert Pattinson's hair part. So it came as a bit of a jaw dropper when we saw the cover of the new In Touch Weekly, featuring proud baby mamas Sarah and Bristol Palin clutching their offspring with the blazing headline: "We're glad we chose life."  Hey, we're all for mothers loving their babies, but if it's not 1984 and you're not in a Wham! video, you might want to reconsider whether that sentiment is appropriate in a pop culture context.

In a preview for the issue, which officially hits newsstands Friday, the magazine describes Bristol's "life-changing and controversial choice to have a baby at the young age of 18" and promises "heartwarming photos of the family and complete interview" with the two busy moms.

And so the Palin women are glad they had their babies. There's also plenty of evidence women who've had abortions aren't too sad about it either. Women who, unlike Bristol, don't have a tabloid paying them a reported six figures to note glowingly how they're "buying [their] own diapers and formula" and publish photos of mama bathing the little one in the sink. (The Palins -- they're just like us!) Perhaps it's pure coincidence, but the magazine's editor-in-chief Richard Spencer did quit last week in a midday walkout so abrupt he didn't even send a memo.

Raising a child with Down syndrome, like Sarah Palin, or motherhood, like Bristol, is no doubt a serious and challenging choice. How nice these ladies were able to make it, freely. See, the thing about "choosing" life is that you can't do it if you don't have any other options – something that the elder right-to-life fundraising Palin, who has called abortion an "atrocity," seems to be unclear on. (Then again, maybe someone who spoke in her gubernatorial resignation speech about "what a child can offer to set priorities right" may be a little fuzzy on terms like choice and priorities.) It's intereresting, nonetheless, that the Palin women chose a magazine that chronicles the dating habits of Pussycat Dolls and provides makeovers to the cast of "Jersey Shore" to express their heartfelt rhetoric on the joys of motherhood.