Why your kid's lunch sucks 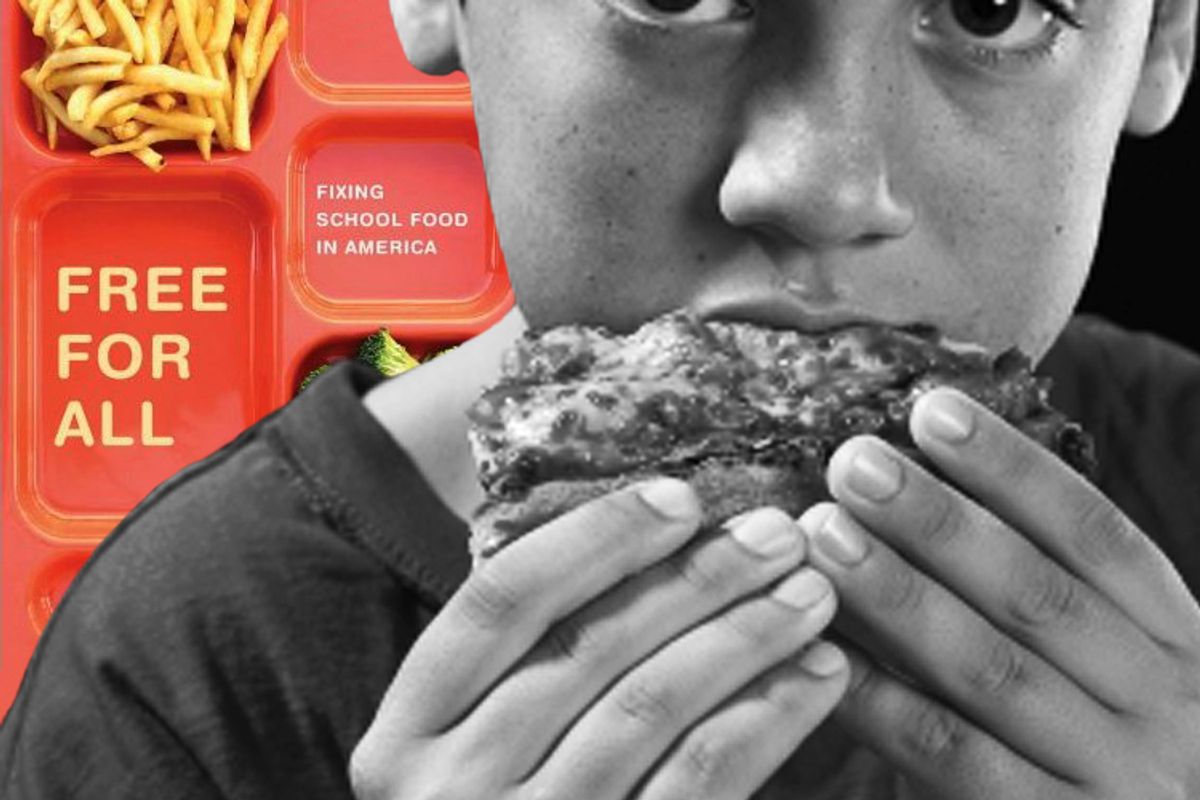 As Janet Poppendieck, a professor of sociology at New York’s Hunter College, recently discovered, it’s not hard to find people with negative memories of their school lunches. When, as part of her work, she asked students at various universities and colleges to recount their experiences, many of the responses weren’t exactly nostalgic: "I would dread the fact that I needed to eat that food"; "High school lunch was gross," or, more succinctly, "Greasy! Fatty! Pricey!"

The stereotype of the subsidized school lunch has never been a particularly enticing one (vomit-colored shepherd’s pie, anyone?), but over the past few decades it’s gotten worse. The National School Lunch Program, created to provide subsidized meals to the country’s impoverished schoolchildren, serves 31 million meals on an average day, but as Poppendieck details in "Free for All: Fixing School Food in America," her new book about the country’s school cafeterias, many of them are un-nutritious, uninspiring and tasteless (the most popular meal: pepperoni pizza, nachos, a peanut butter cookie and diet soda -- with a whopping 1,116 calories and 51 grams of fat).

How did America’s school lunches get so bad? Poppendieck traveled to schools across the country and found that budget restrictions, in-school competition from food conglomerates, arcane federal guidelines (calorie minimums mixed with fat-content maximums), a complicated three-tiered payment system (based on a child’s poverty level) together with the stigmas associated with subsidized food are all to blame for the depressing state of the American school cafeteria. Her suggestion: It’s time for America to start giving not just poor kids, but all kids, a free lunch.

Salon spoke to Poppendieck over the phone about the decline of America’s lunch program, why so many kids are eating pizza, and how to sell meal reform to a country in a recession.

How did pizza, of all meals, come to dominate so many school lunch menus?

Financially, schools have to serve what appeals to the children. It’s become a tyrannical need, in a sense, because it’s very difficult for schools to take risks extending children’s awareness of food. If you serve something they’re not familiar with, and they decide not to buy the meal that day, it has a very negative impact on the bottom line.

Pizza is also made with ingredients that don’t pose a food safety risk -- that’s why so many schools are now using burgers that have been cooked in a factory and then frozen and sent to the schools and defrosted and reheated. That way the liability for any burger-related problem is at the manufacturer's level.

You blame children’s poor lunch eating habits partly on what you call the commercialization of childhood. Why?

Well, when I was a child, kids didn’t have money. We got modest allowances for maybe a trip to the corner store once a week, but children today are major consumers in the economy, and the food industry realized that if they can establish brand loyalty among children they are likely acquiring a lifetime consumer. There’s really a concerted effort to enlist children in the fan clubs of particular brands while they’re young and I think it’s extremely destructive because the items that are heavily marketed to children are not subject to nutrition standards.

When I was a child I didn’t think about the health consequences of how I ate in part because my mother did that thinking for me. We had lots of rules that I just obeyed because they were my mother’s rules, but looking back now I understand they were very much derived from a sense of healthy eating.

So you think the entry of women in the workforce is to blame for these deleterious eating habits?

We aren’t born knowing what’s edible. If parents aren’t going to have enough time with children to provide this guidance and direction and socialization, then the institutions in our society where children spend time have to do it. The increase of parents in the workforce means that the responsibility of schools and after-school programs teaching healthy eating behavior has grown. I’m not blaming it on America’s working mothers.

There’s one moment in the book where a school worker in the Mississippi Delta is told that her school menu doesn't have, of all things, enough calories -- and that she should add another dessert. This makes no nutritional sense to me when we’re concerned about childhood obesity. Why do these kinds of bizarre regulations exist?

When the recommended dietary allowances were first created, during World War II, the focus was on making sure that people got enough food because people were anticipating the onset of rationing. From the mid-'80s on, the concern has been about overconsumption: too much fat, too much sugar and too much salt. So in the mid-'90s Congress passed a law requiring school foods to comply with the dietary guidelines for Americans, which suggested that no more than 30 percent of calories should come from fats. You need to create a low-cost meal in which no more than 30 percent of calories comes from fat and meets that calorie minimum. Schools across the country discovered that adding another dessert to the menu might be the cheapest way to do it.

Obama has asked for an extra $1 billion for school lunches, which translates to an extra 30 cents per meal. Do you think that's enough to make a difference?

It’s actually an additional billion for child nutrition, which means the billion would be spread over a number of programs, not just school lunch and breakfast programs. If I could get another 30 cents a meal across the board in the school lunch program, I think it would be enough to make a difference. I don't think it would solve all the problems, but for another 30 cents per meal, I think you could serve better food. But I don't think $1 billion will give you anything near that.

You visited a lot of schools around the country. How do the lunches being offered in the wealthy areas compare to those in poorer parts of the country?

There are maybe 14,000 school districts participating in the national school lunch program. I visited both wealthy and poor districts, but not enough to generalize. The town you mentioned in Mississippi was one of the poorest places I visited but the meal was terrific. It’s a town where poverty was so high they had what amounts to universal free school meals in the school -- and they had something called Provision 2, where the government essentially pays the school money to serve meals.

So the children’s stigma of buying a subsidized meal was more spread out.

You argue it's time for America to start serving universal free lunch meals for schoolchildren. Given that many Americans are opposed to even giving people a public option for healthcare, do you think it's realistic?

You mean my pie-in-the-sky proposal? [Laughter] Well, let me make my case. The argument for universal free school meals is that we stop selling food to children in competition with the school meal. Did you ever go to summer camp?

Sadly not. I lived a deprived childhood.

Typically in summer camp, there's a meal and everybody eats it. There isn't the alternative of going across the street to the 7-11 or McDonald’s. When it becomes the only game in town, then I think you can serve a much healthier range; you have a much freer hand to introduce foods unfamiliar to kids and give them a chance to get used to them, put more emphasis on fruits and vegetables. It gets rid of the stigma.

If we want to use school food as a way of improving children's eating habits and helping them integrate what they eat with what they might be learning in a health or nutritional education class, then we need to get rid of the unhealthy alternatives that are widely on sale. In the long run, it would save money. The healthcare costs associated with obesity and diabetes and the other conditions that follow on obesity are going be so high that we're going to be sorry we didn't invest in healthy school meals.

Right. What would be necessary for that to happen?

We need to achieve a change in attitude about taxation, because as long as we're operating in this zero sum situation, I think that doubling the cost of national school lunch and breakfast programs is probably not politically feasible.

Especially during a recession.

On the other hand, the number of people in our society who are in situations where healthy meals served free to kids at school would take a major worry off their minds has grown enormously with the recession. I think the recession could factor in as a positive.

It seems like a Catch-22. More people are dependent on school lunches, but fewer people have money to provide them for other people.

Fair enough, but there is much essentially nonproductive labor involved in doing it the way we’ve been doing it. This three-tier system, where every meal has to be accounted for as free or reduced price or full price is an extremely expensive way to do it. It adds layer after layer of procedure and activity. It’s cheaper per meal to serve the meal free to everyone because it eliminates a substantial administrative burden.

If we can move it to a basis where cafeterias can plan on the number of children that are likely to eat in any given day, they will then be able to reduce the waste, get rid of the layers of administrative activities. It's a huge investment in essentially making sure that no child who isn't poor enough eats free.