GOP gets giddy about Massachusetts

Dems in trouble as Senate special election approaches, and Republicans are going all wobbly-kneed with excitement 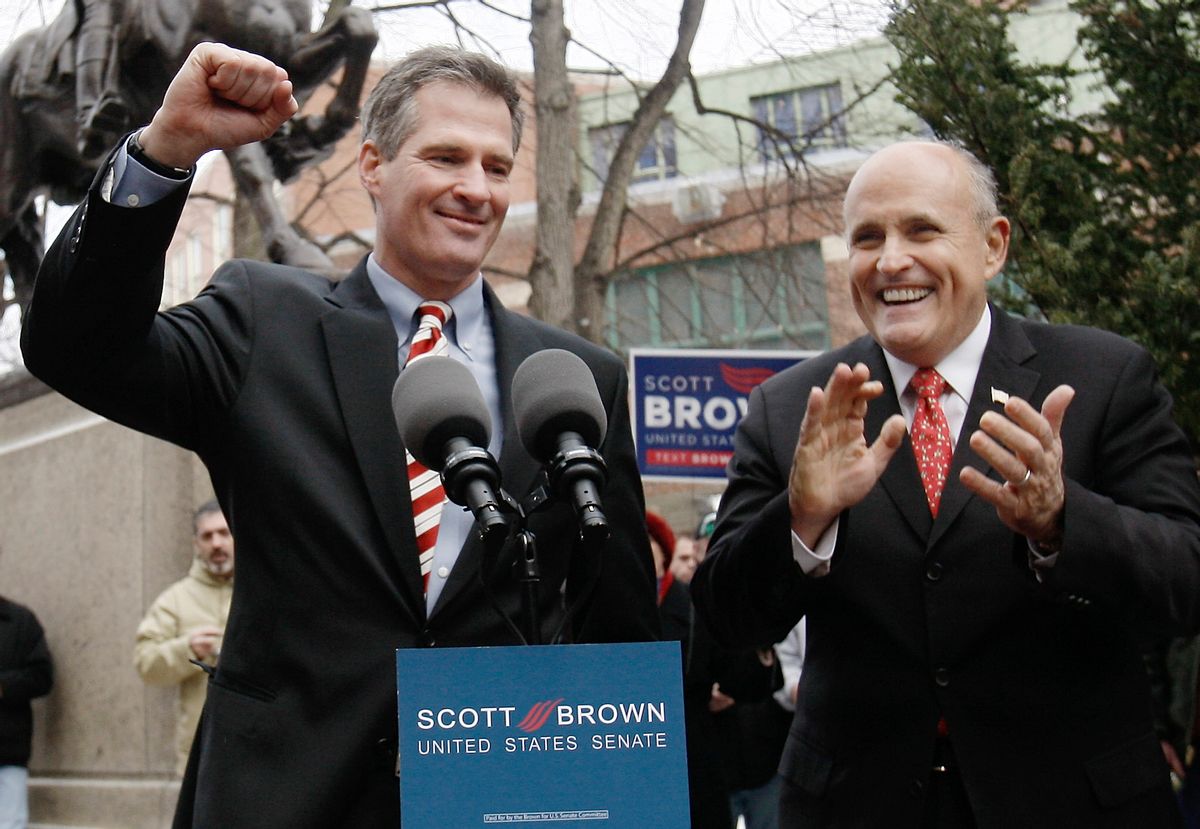 There’s barely more than a weekend standing between us and Judgment Day for Massachusetts Democrats. On Tuesday, the state's holding a special election to pick a replacement for the late Sen. Ted Kennedy, and the bases of both parties are apparently a-quiver with dread and anticipation, respectively.

You could guess it was going to be an intense final stretch yesterday, when a new poll came out from Suffolk University showing Republican Scott Brown leading Democratic nominee Martha Coakley by four percentage points, 50 percent to 46. That’s only the second poll to give Brown a lead, and the race is obviously too close to call -- but still, trailing by four in Massachusetts can’t feel great for Democrats. As pollster David Paleologos put it, "It’s a Brown-out!"

Republican activists see Brown’s blossoming chances as an opportunity to deal a crippling blow to the Obama administration, and are mobilizing to turn his bounce into an actual win. Politico reports that, across the country, other GOP campaigns are turning themselves temporarily into remote offices for Brown. In New York and Connecticut, Republican candidates for governor and the Senate are urging supporters to donate to Brown, and travel to Massachusetts to volunteer. In Florida, Republican Senate rivals Marco Rubio and Gov. Charlie Crist are trying to outdo each other in their support for the candidate.. And as far off as Texas, local Republicans are phone banking for their Massachusetts brother-in-arms.

It’s understandable for the GOP’s base to get all riled up. Running off with Kennedy's seat at the climax of the healthcare fight in Congress would have undeniable symbolic weight. In one independent ad advocating Brown, the narrator explains, "We need Scott Brown’s vote in Washington. Together, let’s stop the politicians’ takeover of our healthcare."

In an article today in the National Review Online entitled "Dems Feeling Heat Over Kennedy Seat," conservative commentator Jonah Goldberg takes it one step further. Brown, Goldberg points out, is "not just any Republican, but an actual conservative, as opposed to some me-too Republican who promises to drive in the same direction as liberals."

Goldberg captures the substance of conservative excitement when he argues that Coakley isn’t just suffering because it’s some metaphysically "bad" time for Democrats. Rather, the party in power is the author of its own sad destiny.

The Democrats’ "bad climate" is a direct result of how they’ve governed. The populist backlash is fueled by a sense that Democrats are acting on their preferred agenda and by their own rules. From the shenanigans of the people who write our tax code and collect our taxes to special deals and secret arrangements for big businesses and legislators who play ball, the Democrats have abandoned transparency in favor of transparent arrogance.

Of course, if we take Goldberg’s word for it, then we’d have to assume that voters in Massachusetts don’t actually want healthcare reform to pass. But there’s pretty clear evidence that they do. Likewise, does it really seem likely that Bay State voters are engaged in some kind of populist uprising against Democrats being too cozy with business, and are hence voting for the candidate who opposes the president’s proposal to tax the big banks to recoup the bailout money?

Which is more probable?

Option One: Massachusetts voters, like voters everywhere, are displeased with the groaning national economy and sky-high unemployment. Democrats are staying home, disillusioned by their party’s ineffectuality in power, while Republicans are all excited about the success their guys have had in blocking the majority's agenda. And all this has been exacerbated by Coakley's general election campaign, which nearly every political observer agrees was too little, too late, and has been plagued with mistakes ever since she realized she really had to run hard.

Option two: Massachusetts voters, some of the most liberal in the country, have seen the conservative light just a year after voting in vast numbers for President Obama and are for some reason expressing this view by turning against the policy positions that they in fact hold dear.

Seems like that second option could use some work in the logic department.