Clinton: Take back the Tea Party! 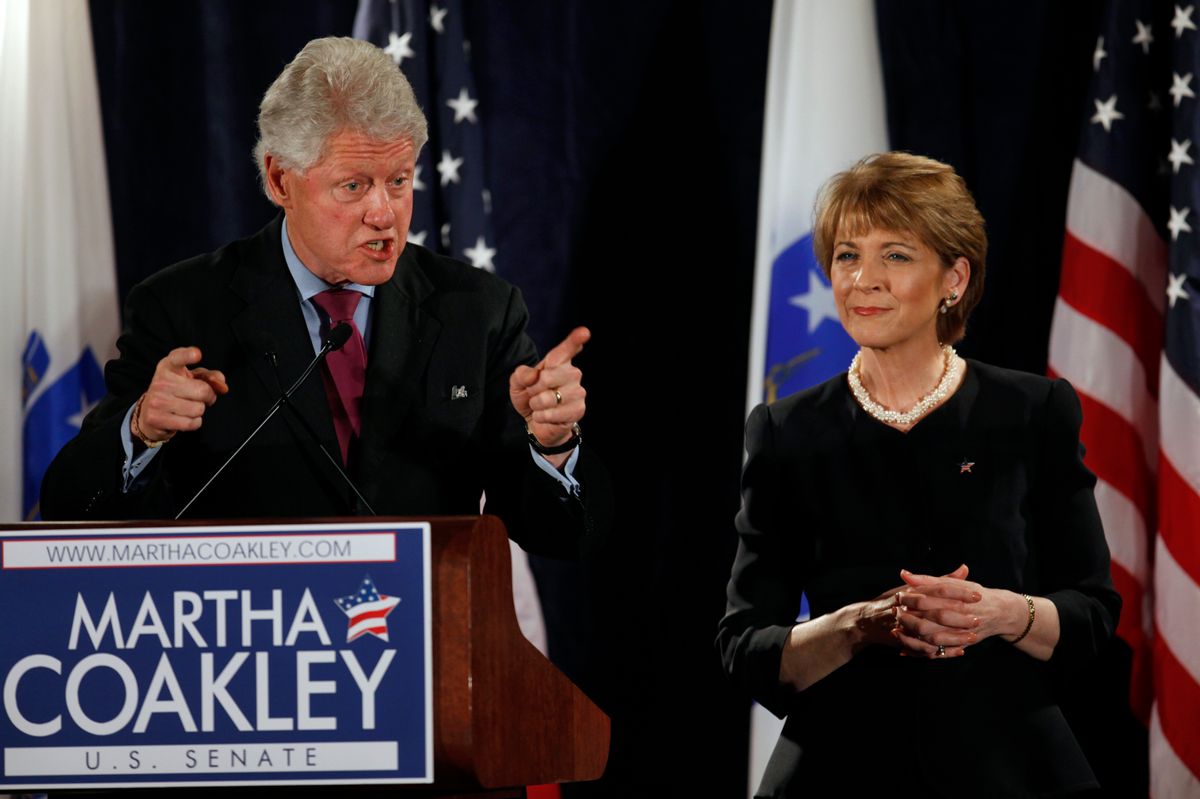 When Bill Clinton flew up to Massachusetts on Friday afternoon to campaign with Martha Coakley, he brought a special message for Bay State Democrats facing the enraged right-wing activists mobilized around her opponent Scott Brown.

“You need to take back this tea party idea,” he told the wildly cheering crowds in Boston and later in Worcester. “They say that the original Boston Tea Party was anti-government, but that is wrong. The Massachusetts Bay Colony had a strong government. They weren’t liberal or conservative, they were communitarians, which means they knew we’re all in this together. What they opposed was the abuse of power.” But the aim of the Republican Party and Senate nominee Brown, he charged, is to “protect the modern abusers of power” – namely, the corporate and financial leaders whose depredations can only be curtailed by strong, responsive government.

Coakley echoed Clinton’s populist theme, accusing Brown of wanting to spare the nation’s largest banks from paying back the billions of federal bailout dollars – even while the bankers paid themselves “seven or eight-figure bonuses.” The rich and well-connected “will always be able to hire someone to speak for them. But who is going to speak for the rest of us? That is why I’m running for the Senate.”

Confessing that she wasn’t sure anyone “could fill the shoes” of the late Senator Ted Kennedy -- whose seat she and Brown are contesting in Tuesday’s special election -- Coakley said that would be her goal. “Ted Kennedy stood for the poor, the elderly, the young, the disabled,” she recalled. “Scott Brown has no interest in doing that.”

By the time Clinton arrived at Logan Airport in a small private jet, he had spent three sleepless days working on Haitian relief. He fielded phone calls from government officials in Port-au-Prince and Washington en route, while trying to track events on the devastated, chaotic island. But the wildly cheering Democrats at the packed rallies lifted him, and he spoke passionately about Haiti, health care, energy and the economy, warning Massachusetts not to award the power of the filibuster to the “same Republicans” who had sought to thwart his initiatives a decade ago.

Fatigued and preoccupied as he was, Clinton felt a special obligation to help Coakley. Advancing “good government” and helping Haiti are “two sides of the same coin,” as he tried to explain to a writer from National Review Online. Moreover, Coakley had endorsed Hillary Clinton’s presidential bid during the Massachusetts primary, defying the entire Democratic establishment in the state (including Kennedy, Senator John Kerry, and Gov. Deval Patrick) that had backed Obama.

Despite the enthusiasm and crowds generated by Clinton and Coakley at the Friday events, her prospects seemed to be slipping with the latest Suffolk University poll showing a four-point lead for Brown. “I think she can pull this out,” said a Democratic Congressman who showed up in Worcester, but he didn’t sound entirely convincing. President Obama decided to stump for Coakley personally on Sunday, which can either be seen as a sign of Democratic desperation, or more likely, evidence that top Democrats believe she can pull it out, with some help (since the White House team wouldn't send Obama to advance a completely lost cause.)

On the street outside the Worcester Polytechnic Institute auditorium where the Coakley supporters, nearly a hundred Brown supporters stood in the freezing darkness for an hour, lustily chanting slogans and waving signs with the fierce intensity that can turn an election -- especially when turnout is low.