Digging cameras from the rubble, students at Haiti's only film school capture images of destruction and recovery 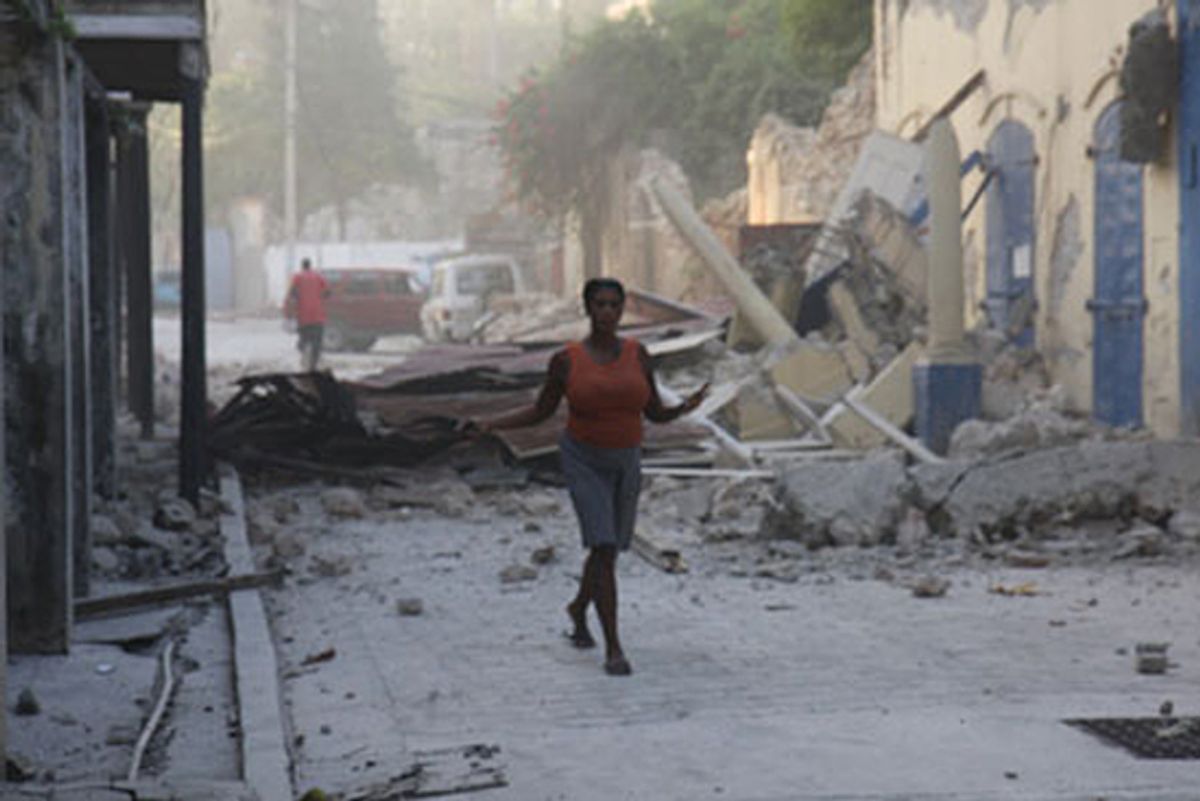 Many of Annie Nocenti's film students at the Ciné Institute in Jacmel, Haiti, lost their homes in this week's devastating earthquake. Some may have lost friends and family members; as in much of the country, the scope of the disaster is not yet clear. "But they are out on the streets now, shooting and editing," she says. "They can get into places nobody else will ever go, and interview people outside news crews will never meet. This is what we trained them for."

When Nocenti, a New York filmmaker, first arrived at the Ciné Institute two years ago, she found a community of students eager to learn the craft at the Caribbean nation's only film school -- even though they had seen very few feature films. "Haiti has almost no infrastructure for cinema and very few working movie theaters," she says.

Together with David Belle, the institute's founder, Nocenti developed a two-part vision for film education in Haiti. On one level, it was purely practical. "We wanted to get them jobs in the very small film industry that exists in Haiti. So they learned how to operate the cameras, how to hold a boom." But Belle and Nocenti also wanted to encourage the development of an indigenous and distinctive brand of Haitian cinema, inspired in part by "Nollywood," the no-budget film industry of Nigeria, among the largest in the developing world.

"We're beginning to see the emergence of an auteur vision, through Haitian eyes," Nocenti says. "It's influenced by their culture, their art, by the voodoo tradition. Because these filmmakers are not copying anybody, what's coming out of them is very pure. They weren't raised in a video store. They've never seen a Quentin Tarantino movie." (Here's a short film Nocenti's class shot in four days last September.)

This week, plans for the development of Haitian auteur cinema abruptly went on hold. None of Nocenti's film students was killed or severely injured in the quake, but the Ciné Institute building was seriously damaged. After literally digging their cameras and equipment from the rubble, Nocenti says, the students put five crews on the streets in and around Jacmel, a picturesque city of 40,000 on the southeastern coast that is known as an artistic and artisanal center.

Belle, the film school's founder and director, has made his way from New York through Santo Domingo to Port-au-Prince, the Haitian capital, in recent days. He spent his first night there sleeping in a hotel parking lot. His first-person report on the appalling conditions in that city is available on the institute's Web site.

"Huge state-owned caterpillar tractors and dump trucks were just beginning to arrive and load bodies as we passed through [Port-au-Prince]," Belle writes. "In the worst parts -- every 50 feet or so -- there were groups of 10 to 15 bodies lined side by side or stacked together. In between these stacks and groupings is a continual line of singles and doubles -- one body after another. The odor is overwhelming. No one sleeps indoors and so roads are also partially blocked with families who have moved their beds to the street." Among the known dead, Belle says, is the assistant director of his film "Madame Ti Zo."

From New York, Nocenti is trying to get filmmaking supplies into Jacmel, and to coordinate uploading her students' video to the Internet and translating the narration from Creole and/or French to English. She emphasizes that the current mission is not merely to capture the devastation, but to document the recovery process and the resilient spirit of the Haitian people.

"We don't just want to see stories of poverty and chaos coming out of Haiti," she says. "We want to see positive stories too -- and the story of our students and what they have accomplished is a positive story. Haiti is a beautiful country, a land of culture, music, art and agriculture. I worry sometimes that if people think it's all despair, they will throw up their hands and think that nothing can be done."

Nocenti says that when she meets international aid workers in Haiti, they sometimes ask her why she isn't working on more urgent issues of survival such as food, water and shelter. She tries to explain that cultural development is itself necessary to survival. "We're trying to teach these students how to shoot stories that will lift up their entire culture. It's not an easy thing to explain."

Nocenti adds that all donations made through Ciné Institute's home page will go 100 percent to support earthquake relief in Jacmel and the urgent documentary work of the student filmmakers, with no administrative overhead. Footage from her students has begun to come in. Embedded below is a report from Jacmel by institute student Keziah Jean, with translation.

The Victims in Jacmel : Keziah Jean from Ciné Institute on Vimeo.

Transcript: "Two days after the earthquake hit Jacmel, the number of injured has increased greatly in the biggest hospital of the city, a hospital that is in no capacity to give basic care to its patients for many reasons. The buildings have been destroyed, there hasn't been medication in the pharmacy ever since the hospital has been operational and the absence of doctors to offer first aid relief. For the injured Jesus is their only hope. [People heard praying and asking God to save their loved ones and to help them in this difficult time.]"