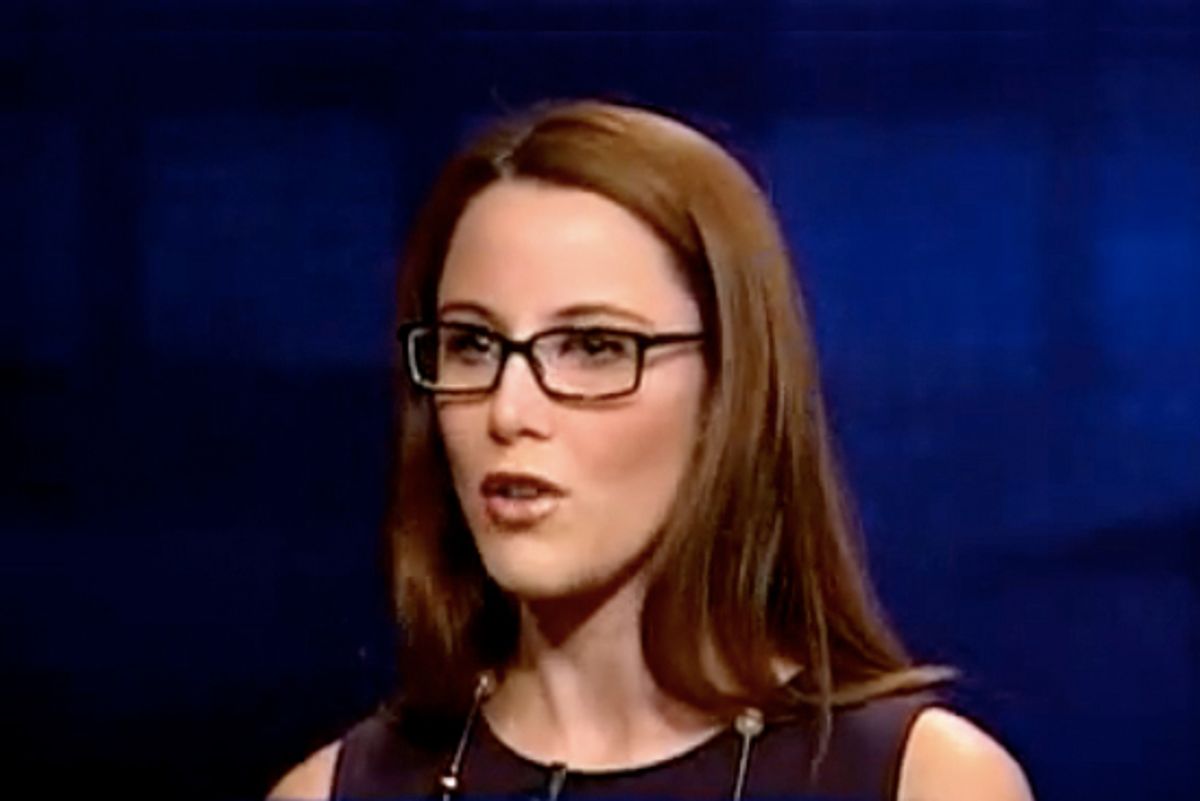 Attempting to describe Tucker Carlson's new online magazine, the Daily Caller, Colin Delany writes at the Huffington Post: "one friend of mine referred to it as a cross between 'Politico, Drudge and the NY Post'; while another suggested 'Pajamas Media meets The Daily Beast.'" So far, says Delany, the Daily Caller is light on original reporting, heavy on "copy/paste substituting for actual journalism" and sexy page-view magnets. (As far as the latter goes, I do look forward to seeing whether they'll ever top my all-time favorite HuffPo headline, "Megan Fox Wears Panties, Lifts Foot Above Head.") "Nice work on the business front," he writes, noting that ad sales have gone tremendously well, "but that situation's unlikely to last unless this sucker ups its ante on the content side."

The Daily Caller does have one intriguing bit of regular content its competitors don't, though: A diary by S.E. Cupp, one of the latest young, white conservative women to make a career of saying inflammatory things while looking really pretty. Cupp's own Web site boasts a blurb from Carlson: "If anyone can make conservatism cool again, it's S.E. Cupp, one of the smartest, most energetic and interesting people I know under 30." And while I'm not one to take Tucker Carlson's word on pretty much anything, my own investigation into his protégé -- i.e., a good half-hour of checking out what Google turns up on her (Salon pays other people to do unimpeachable reporting, thanks) -- suggests she is indeed smarter and more interesting than your average conservative pundit.

For one thing, she can write, and she's genuinely funny. In today's diary, she hopes for a Rick Warren/Pat Robertson Twitter war, decides that the "idea of President Beck balancing the budget on a blackboard, in a Thomas Paine costume, crying, is kind of awesome," engages in "about four minutes of relatively shallow introspection, questions about technology-dependence and a little womb-nostalgia" after being separated from her BlackBerry, and spends "three minutes thinking of a way to meet Judge Judy and convince her to become my second mother." She seems to be a fan of my favorite novelist, Nick Hornby, and he's publicly called her "charming." In an interview with a besotted blogger, she said, "I like to write about politics as it appeals to a certain American value -- whether it’s self-sustainability, independence, common sense, fiscal responsibility, community, decency -- but not in a saccharine or pollyanna way, but in a way that gets to the root of what makes us all human." Out of context, all that makes S.E. Cupp sound like the kind of woman I'd love to hang out with. In context -- the one where, say, the serious thought of a President Beck doesn't necessarily make her blood run cold, or where her political writing explores the relationship between our common humanity and "the reasons we should want a Sarah Palin in a position of power" -- I think we're probably both OK with living 800 miles apart.

It's the contradictions that make Cupp an equally interesting and irritating personality. Her forthcoming book has the Coulteresque title "Losing Our Religion: The Liberal Media's Attack on Christianity," but Cupp says she's an atheist. She's just an atheist who feels comfortable barely tweaking standard Christian talking points about the religious foundation of the human conscience. ("It's an understanding of and a respect for [Judeo-Christian] values that keeps me moral ... even if we agree that nonbelievers can be moral people, how would you know?") Despite those religious-but-not values, in her first Daily Caller diary, she introduces herself as "a terrible person" and "a misanthrope." OK, I have to admit you don't often hear that from a conservative pundit -- tell me more! "That’s because most of the people I meet fall far short of the examples my mother and father set decades ago. Whereas they are compassionate, hard-working, down-to-earth, unpretentious, God-fearing common folk, you are an entitled, self-important, elitist and condescending snot weasel who wears his empty moral relativism and cheap 'Daily Show' pieties like they are Olympic medals."

The "you" in question here is a pretend first date she's concocted, which might prompt the thoughtful reader to wonder, "Why did you accept a pretend date with me when you already know you hate everything I stand for? Is it that difficult to be a single woman in New York?" (Oh yes, she lives in New York -- and is an Ivy League graduate and former professional dancer currently working on a master's at NYU -- but she is totally not an artsy East Coast intellectual elitist, on account of how her god-fearing, common parents raised her to be a god-fearing, common atheist ballerina turned author and pundit.) But to dwell on such questions would be to miss the beauty of what Cupp has accomplished here: Instead of inventing a friend or blogger or liberal media whose imaginary views she loathes, like a lesser conservative personality might, she's invented a reader! You are the straw man! Now, how are you going to argue that such a person doesn't really exist, when you're sitting right there? Well played, S.E. Cupp. Well played.

She's smart. She's funny. She's charming. She's honest enough at least to admit she doesn't believe in a god and (in the second video below) to give George Bush, of whom she's "a fan," only a C grade on fiscal responsibility and cutting taxes. But then she gives him a B+ on limited government, which ... what? What? And then you remember, this is a woman who says that in liberal New York, walking into the Fox News building "is like slipping into a warm bath." A woman who wrote on that august organization's Web site about an imaginary "slew of gay parties and inaugural balls" planned to welcome President Obama. Whose future column ideas include: "Shouldn’t it be the conservative creationists who want to save the polar bears and all of god’s creatures, and the liberal Darwinists who say 'Screw ‘em -- survival of the fittest, bitches'? Can’t we just drop a bomb on Yemeni al-Qaida camps? Is Avatar un-American and anti-military?" And who has said with a straight face to Sean Hannity (first video below), "Frankly, the rhetoric on the left has gotten so ugly." So yeah, she's basically just another Ann Coulter in someone sort of interesting's clothing. But for better or worse, it looks like she's here to stay.