When war is peace and right is center

It's not 1984, but Newspeak lives on in the media's skewing of the terms of our political debate 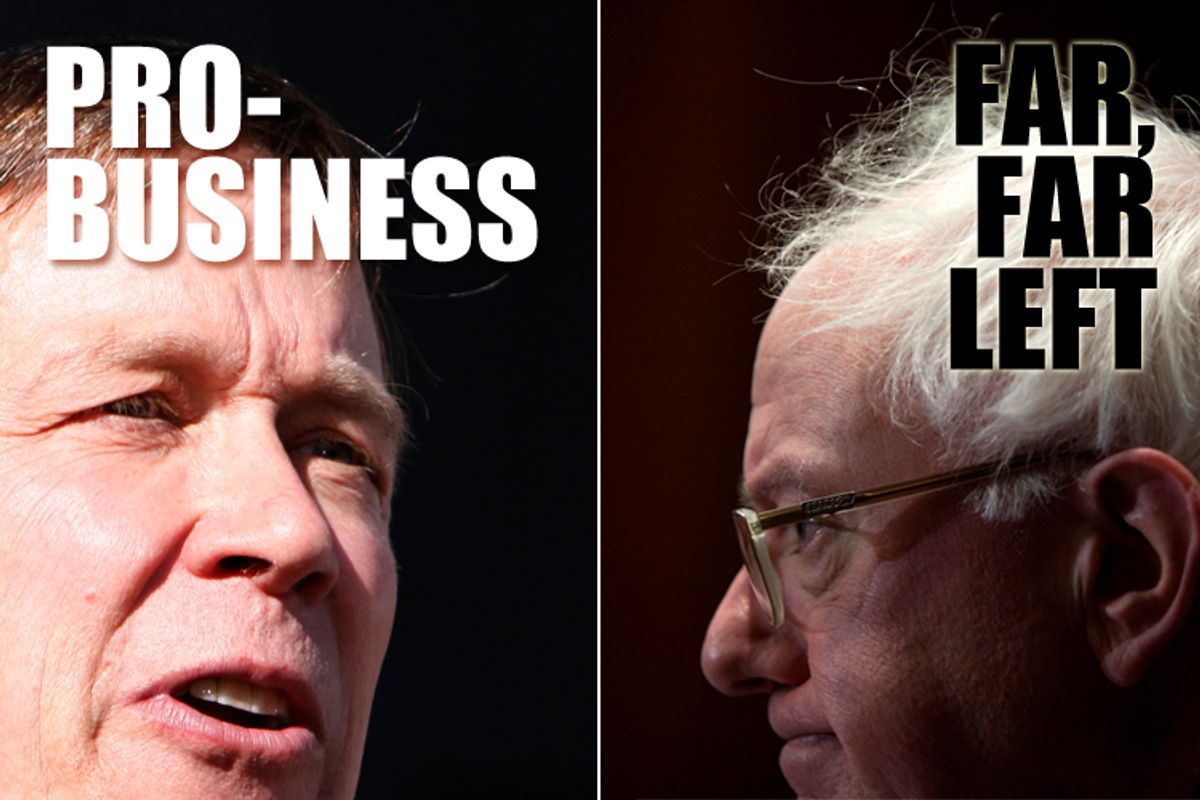 "War is peace, freedom is slavery and ignorance is strength" -- more than a quarter-century after those oxymorons were supposed to pervade an Orwellian 1984, today’s media make such Newspeak even more preposterous: On economic issues, we are often told that right is center, center is left, and left is fringe.

For a year, national reporters (with help from conservative talk-radio goons) have depicted the center-right Obama administration and its corporatist policies as quasi-Marxist. We've heard that a government-run public healthcare option is a "liberal" cause, even as polls confirm that most Americans -- not just liberals -- support the idea. We're told that legislators backing no-strings-attached bank bailouts are mainstream "centrists," while bailout opponents are extremists -- even as public opinion surveys say the opposite.

This is Washington's "fair and balanced" journalism (or "journalism," as it were) and as two of the most respected metro newspapers show this week, its distortions can bleed into local coverage.

Reporting on independent Bernie Sanders, the Boston Globe headlined its recent profile: "Sanders a growing force on the far, far left -- Vermont senator is gathering clout as he takes on the Fed's Ben Bernanke."

Polls, mind you, prove that disdain for the Fed chairman transcends "the left." As a failed regulator and architect of unpopular bailouts, Bernanke is despised by the public at large. Even within the Senate, his renomination faces transpartisan opposition from Republicans like Jim Bunning (Ky.) and red-state Democrats like Byron Dorgan (N.D.).

So depicting Sanders' fight against Bernanke as a "far, far left" crusade tilts the definition of the economic "center" -- the premium label in politics -- to the far, far right.

In an earlier interview with the paper's editors, Hickenlooper told the Post that his candidacy will be motivated by his belief that "there should be a lot more people in government who come out of the business community."

The Post responded in its editorial not by pointing out that the business-government revolving door is already spinning out of control, nor by noting that we're approaching the historical zenith of corporate-government corruption. Instead, the newspaper gushed.

"Even though he governs a left-leaning city, Hickenlooper has been a pro-business Democrat ... making (city services) more cost-effective," the paper wrote, before criticizing Hickenlooper's potential Democratic rival, Rep. Ed Perlmutter, as unacceptably "farther to the left than Colorado's electorate."

Notice the suggestion of conflict between "left-leaning" and "pro-business.” There was no mention that the politicians typically labeled "pro-business" were the same ones who pushed deregulatory schemes that destroyed so many businesses in this recession. Likewise, there was no mention that more "left-leaning" initiatives might have averted the disaster.

Notice, too, the technocratic euphemism describing old-line conservatism: "Cost effective" is code for a mayor who most recently threatened layoffs unless police agreed to give up previously negotiated pay raises.

And, most important, notice the newspaper’s line about Perlmutter. Unlike Hickenlooper, this eminently moderate congressional Democrat with ties to organized labor has twice won a formerly Republican swing district that is a microcosm of his state. Perlmutter, in fact, is living proof that pragmatically progressive economic credentials aren't "farther to the left" than the electorate -- they are squarely in the election-winning center.

The Globe and Post examples, of course, epitomize the larger problem that arises when media voices -- whether deliberately or inadvertently -- skew the terms of our political debate. War is not peace and right is not center. But such Newspeak to the contrary can destructively alter the public's perception of acceptable and unacceptable, possible and impossible.

David Sirota is the author of the best-selling books "Hostile Takeover" and "The Uprising." He hosts the morning show on AM 760 in Colorado and blogs at OpenLeft.com. E-mail him at ds@davidsirota.com or follow him on Twitter @davidsirota.