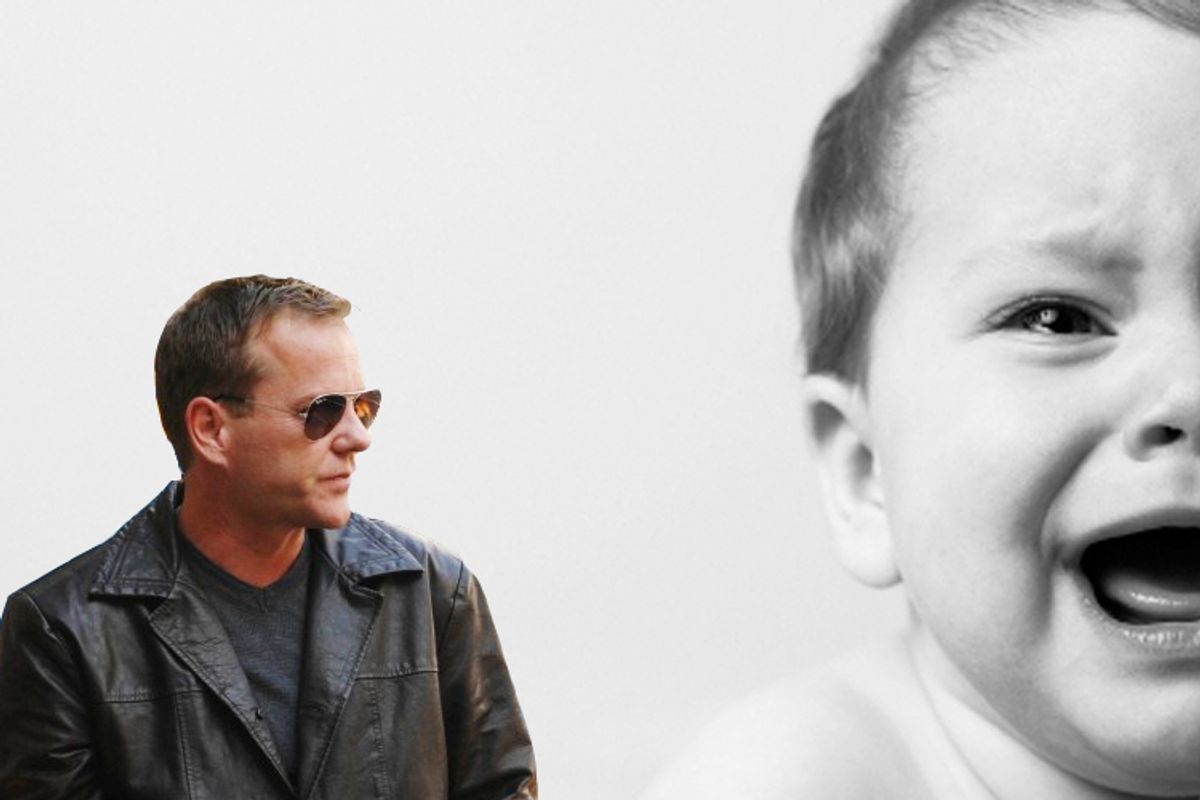 Losing your edge is underrated. Suddenly you're free to drop out of the media loop. Suddenly you don't have to feel guilty about ignoring things you never cared about to begin with, hipster bands in skinny jeans, tweets about late night shake-ups and all of the other cultural obsessions of a precious handful of busybodies huddled together, drinking overpriced wine in their drafty apartments by the sea.

Now you can focus on what's really important in life.

Huh. I sort of want to go online and do a Google search on "important things in life." Maybe someone has tweeted about this lately…

Thankfully, Jack Bauer has just discovered what's really important in life, and he's here to show us about it. The first time we see Bauer in the eighth season premiere of "24" (four-hour, two-night premiere airs 9 p.m. Sunday, Jan. 17, and 8 p.m. Monday, Jan. 18, on Fox) he's smiling and chatting happily with his young granddaughter. Of course we're meant to be gratified by this kinder, gentler image of Bauer, finally having lost his edge, finally at peace with himself, finally open to making real, intimate connections with others, just like a real human being with blood in his veins.

Instead, all we can think is: Upgrade the terror alert to red! The one man who has the power to save this great country of ours from annihilation at the hands of terrorists, the one man who stopped at nothing to deliver us from widespread death and destruction countless times before is now watching Barney and fetching juice boxes!

We've certainly seen this before. One minute, our friends have thriving careers and active social lives but they can still be counted on for two-hour-long phone sessions concerning the overwhelming obstacles to a consistent hair removal regimen. The next minute, they're unemployed hermits who can't talk for more than a full minute without interruption because some small person just shat on the floor or ate something off the ground or a tiny Cinderella doll needs her microscopic glass slippers put on with miniature tweezers.

The point is, little children may bring great joy to the world, but they also make it more likely that a) good female doctors and lawyers and bookstore clerks and waitresses will exit the workplace, leaving far less nurturing ball-scratchers in their places b) countless really scintillating conversations about hair removal will be cut short unnecessarily and c) the free world will be crushed under the hobnailed boots of a ruthless band of terrorists with really bad Russian accents, one of whom always seems to have a graying ponytail (or an "executail" as a friend likes to call it).

Now, naturally we all assumed that Jack Bauer would remain immune to the charms of small children indefinitely. Time was when Jack Bauer would sooner have his fingernails forcefully removed by a mouthbreathing thug with an executail than spend time in the company of a little child. In fact, the Jack Bauer we once knew and loved would happily murder his way through a throng of black-turtleneck-wearing terrorist psychos, biting their faces off and breaking their necks using only his thigh muscles and stabbing them in the jugular with sharpened pencils, just to escape an afternoon with a drooling toddler.

The old Jack is long gone, though, replaced with this sad little half-caf Jack, who takes other people's feelings into account and looks straight into his own daughter's eyes when he's speaking to her. I mean, come on, Jack! What have you become?!

Of course they gave Wilty, Thoughtful Jack a totally lame impromptu assignment: Save the peace-loving president of some country in the Middle East from being assassinated by his brother (who quite obviously isn't from the same country, let alone the same family). Yes, that's right, we're supposed to go from nuclear warheads and deadly nerve agents and biological warfare and dirty bombs to one little half-assed assassination attempt. This is what's known as devolution: Tune in for the next season of "24" when Jack saves a really crowded Starbucks from a man with bad gas!

Now, granted, "24" has relocated to New York City, which means that when we're treated to more gloomy interiors of warehouses and murky back alleys and dim apartment buildings filled with piles of AK-47s and plastic explosives, we can say to ourselves, "Cool, they're in New York City right now!" Also, the new and improved NYC CTU offices have really cool computer graphics instead of those sad IBM mainframes they were saddled with back in L.A. Chloe (Mary Lynn Rajskub) is back, and Kara Thrace (Katee Sackhoff) is even there, grappling with some terrible subplot about a scorned stalker exboyfriend from her white trash past who tracks her to CTU and growls at her until she tosses him the keys to her apartment and warns him, "But you can only stay for one night, 'kay?" I'm sure that maneuver is straight out of the pages of the Safely Avoiding Stalkers handbook.

Nonetheless, Sackhoff as Sexy Lady Victim Du Jour is the least of our worries. Just when Jack is about to leave CTU to move out to LA with Kim and her dumb husband and their adorable time-suck of a child, just when Jack is saying goodbye and expressing his feelings so openly and honestly along the way that you want to grab him by the shoulders and shake some sense into him (the way he taught us to, in the good old days), along comes last season's Sexy Lady Victim Du Jour. I'm not naming any names, but suffice it to say that instead of whimpering and gasping at the inherent violence and grotesque nature of every single task involved in saving this great nation of ours from the black-leather-gloved clutches of the terrorists (tasks that she somehow didn't confront in her training at Quantico or wherever, because now presumably they skip the classes on interrogation techniques involving household appliances and they just grow organic beets and do Pilates), now this Former Sexy Lady Victim lacks affect and has dead eyes, because – pay attention! – she's dead inside.

Dead inside, people. In case you're wondering what that looks like, well, you make your face go all flat and you stop styling your pretty, shiny mane of hair, favoring a messier sort of knot that says "I don't care anymoh-whoa" (even though you're still carefully applying thick mascara and lip gloss so Wilty Jack might find you well nigh irresistible).

But we don't want someone with carefully applied mascara on to save the world! We want Jack Bauer to do it, damn it!

And besides, the world doesn't even need saving this season. Based on what I've seen so far, we're going to spend the next 24 hours bickering with exboyfriends only to give in suddenly and toss them our keys. We're going to sit on our hands all season as lukewarm thugs pull lukewarm stunts and lady journalists fall in love with world leaders. We're going to pick at our fingernails and hope that Chloe eventually gets a promotion.

But it's not just CTU that's lost its edge. You know who else is back? President Taylor (Cherry Jones) from last season. Here the problem isn't mascara so much as a general lack of flair and/or bluster and/or swagger and/or toughness. What I wouldn't do for good old snakey, slimey President Logan or macho but honorable President Palmer! Because, if you're going to put a woman in the White House, at least give the role to someone vaguely charismatic, Allison Janney or some Glenn Close type, not a woman who spent the entire seventh season whining unconvincingly about things that were totally wrong and no fair, as if, instead of campaigning relentlessly and sucking up to evil lobbyists and biting the heads off squirrels like any woman destined to lead the free world would have to do to get as far as she had, she'd been shopping at vintage stores and puttering around in her herb garden for the past few decades.

In short, after watching the first four hours, I can tell you that the eighth season of "24" does not look good. You know how much I adore this stupid show, but please, don't waste your time. If Dead Inside goes off the tracks entirely or Jack locates his lost testicles or some thug gets bored and pipes poisonous gas into President Taylor's office, I'll let you know.

In the meantime, you should really focus on the important things in life.

And hey, when you find out what they are, could you let me know?