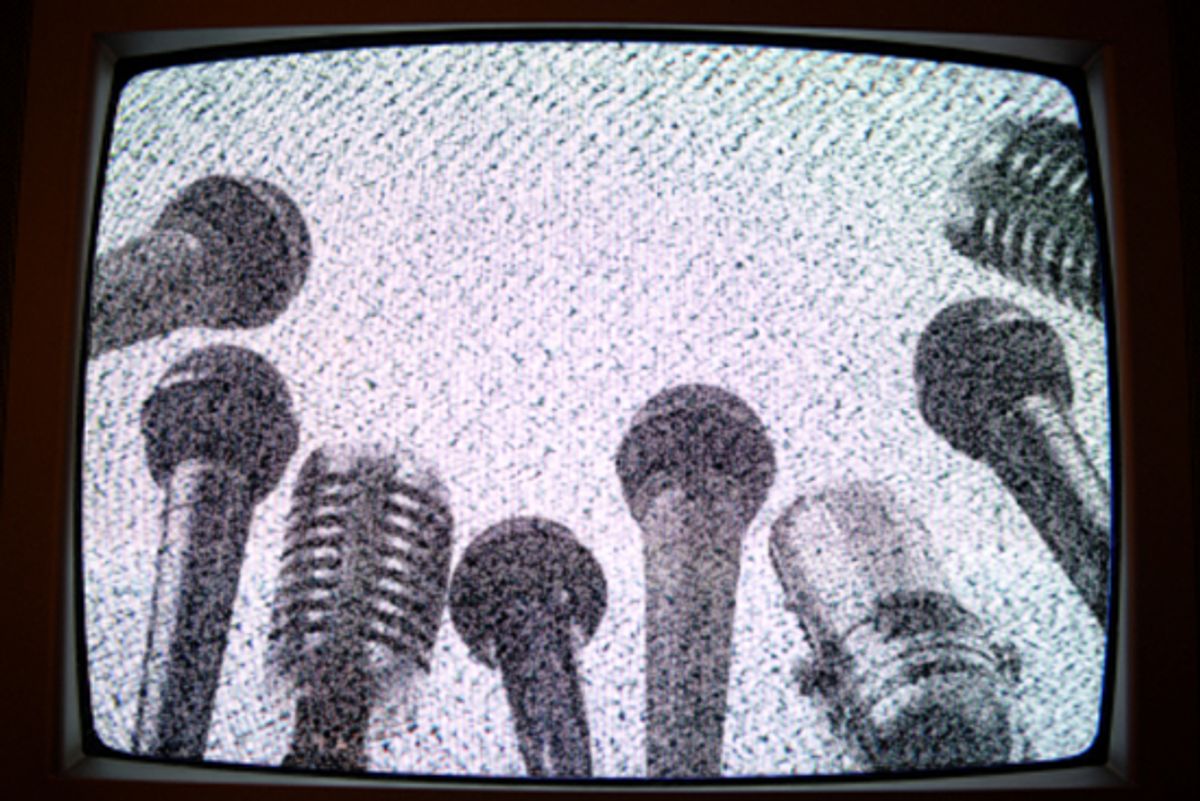 Why are progressivism and conservatism all but unrepresented on American television? The question might seem absurd. Aren't there entire television channels, like Fox and MSNBC, identified with conservative and progressive viewpoints? Aren't there several million left-wing or right-wing talking heads on TV, with new pundits hatching in the factory farm every day?

Here's the problem: Most of the representatives of progressivism you see on TV are not really progressives. They are what might be called "Democratists." Most publicly prominent conservatives are not principled conservatives at all. They are "Republicanists."

'Twas not always thus. Let's travel back in time to the 1950s and 1960s, when there were only three networks. In both Congress and the executive branch, there was a seemingly monolithic bipartisan establishment. In Congress, this took the form of the dominant "conservative coalition" of moderate Republicans and conservative Southern Democrats (like today's Blue Dogs, only more prehistoric). The executive branch of both parties, along with the prestige press, was socially more upscale than Congress, staffed by people who prepped at the same Northeastern schools, went to the same Ivy League universities, wore the same horn-rimmed glasses, and thought the same complacently establishmentarian thoughts. If you doubt me, watch old black-and-white "Meet the Press" episodes, where the Horn-Rimmed People drone on to each other about current affairs in vaguely British, "Long Island lockjaw" accents.

William F. Buckley Jr.'s movement conservatives, the libertarian movement, and the New Left all rebelled in different ways against the sclerotic bipartisan establishment. In the 1950s and 1960s their dissent was pretty much confined to small-circulation magazines like National Review and Dissent. The real breakthrough was Buckley's "Firing Line" program on PBS, followed by the appearance on Sunday television of George Will. Buckley and Will both looked and sounded like Horn-Rimmed People, but their thinking broke with the postwar consensus. The old networks soon balanced them with overtly liberal commentators — Shana Alexander vs. James Kilpatrick. Gore Vidal debated Norman Mailer on "The Dick Cavett Show." Genuine intellectuals and authors occasionally got on Johnny Carson's "Tonight" show. In recent years, Bill Moyers has kept this kind of intelligent programming alive in an increasingly hostile media environment.

In hindsight, the period from the 1970s to the 1990s was the golden age of political ideology on TV. In the post-consensus era, the people whom the network bookers selected to represent the right and the left were mostly editors or writers for overtly ideological magazines, or else academics. Neither the conservative nor the liberal public intellectuals thought of themselves as professional flacks for one of the two parties. I knew both Bill Buckley and John Kenneth Galbraith, and neither would have hesitated to criticize a president of the party each preferred — say, Gerald Ford or Jimmy Carter.

From my vantage point in journalism, I watched all this change in the 1990s. At the beginning of the '90s, the "bookers" or producers who decide who will go on television were still turning to political-magazine editors and academics when they needed a liberal or conservative voice. By 2000, however, with few exceptions, the bookers were booking partisan pollsters, campaign consultants, and other career Democratic and Republican political operatives to represent the right and the left.

Why did this happen? Partly it was the result of the increasing ideological coherence of the two parties, with the decline of conservative Democrats and liberal Republicans. But I think the main reason for the replacement of ideological intellectuals by partisan spin doctors was the spread of cable television. Before cable, if you were interested in politics, you read political magazines — the Nation, National Review, the New Republic. Only a couple of hours on Sunday morning TV on the three broadcast networks were devoted to political debate, and often the editors or contributors of the political magazines were tapped as the gladiators.

The rise of CNN and other 24-hour all-news channels had two effects. First, it greatly multiplied the slots for commentators. Like housing and finance during the bubble years, television punditry was a growth industry in the 1990s and 2000s. Political magazine editors like Katrina vanden Heuvel, editor of the Nation, and Bill Kristol, editor of the Weekly Standard, still make it onto television, but they are easily lost among the swarming multitudes of talking heads, many of them recent college graduates who spend their days waiting by the phone for a summons to the TV studio to spout out their party's e-mailed daily talking points in 30 seconds flat.

In addition to multiplying the number of commentators, cable news channels restricted the scope of commentary to two subjects: immediate reactions to breaking news, and "who's up, who's down in the polls" handicapping. In this age of narrowcasting, the news junkies who follow cable TV and the blogs define politics as partisan gamesmanship. They don't want to know whether the healthcare plan makes sense or not. They want to know whether its passage will help or hurt Democrats in November. For these viewers, politics is a game, as the stock market is for the viewers of Bloomberg and CNBC.

In this new media universe, where cable news channels are forced to fill up an entire day of programming with talking heads between news segments, the producers and bookers naturally turn to experts in daily polling — the dreary, interchangeable "Democratic strategists" and "Republican strategists" who populate cable news and the equivalent blogs. I don't blame the producers. They are trying to make money for their corporations in a battered and declining industry. Having lost the general audience of yesteryear, they are feeding their smaller, more homogeneous audience of political junkies the drugs that the junkies want.

For economic reasons, then, genuine public intellectuals like Buckley and Galbraith probably could not get on TV today. Bill Buckley was fond of quoting the philosopher Eric Voegelin to the effect that liberals were trying to "immanentize the eschaton." Use six-dollar words like those on TV today, and you'll never be invited back. And I can only imagine the icy silence that would have followed, if a chirpy news anchor had asked Professor Galbraith what he thought of the latest poll in the Massachusetts Senate race.

Here we are, then, in the age of political narrowcasting, in which, apart from the occasional ideological blogger, most of the "liberals" and "conservatives" alike are hack political consultants or pollsters who live and work inside the Beltway. They know nothing about the wonky details of public policy and even less about political philosophy. But they know who's gaining or sinking in the polls, and they do their assigned job of spinning the polling data to help their party and hurt the rival party. There are plenty of progressive and conservative and libertarian thinkers and activists — more so today than ever. And there is no reason to believe they are any less talented than their predecessors. But they can't get on TV, and without TV exposure, even in the age of the Internet, their influence is limited.

If my analysis is correct, then the near-extinction on TV of political intellectuals, progressive and conservative alike, and the on-screen multiplication of partisan "Democratist" and "Republicanist" P.R. flacks is not the result of a sinister conspiracy on the part of media plutocrats. It is simply the result of narrowcasting. The obsessive news junkies would rather watch Terry McAuliffe debate Dick Morris the 10,000th time than watch a progressive philosopher debate a conservative theorist about the purpose of markets or the meaning of democracy. Important debates about policy and philosophy go on, but in shrinking print magazines and small-readership blogs and subscription-only academic journals.

It may be that the Age of Intellectual Politics on television was a brief two- or three-decade aberration, between the Age of Horn-Rimmed Consensus and the Age of Partisan Spin. I wonder, though, if the very narrowcasting that destroyed the first (and to date only) era of intelligent televised political debate might help revive it.

If narrowcasting is the future, then why can't there be a progressive channel? And a paleoconservative channel? And populist, and libertarian, and democratic socialist channels, too? I don't mean partisan channels, like Fox and MSNBC, populated by robotic agents of the Democratic and Republican parties justifying whatever the party leaders did or said in the previous 24 hours. I mean channels where people who belong to an extrapartisan political-intellectual movement discuss the issues of the day from their perspective, with little regard for whether it helps or hurts one of the two party machines in the next election.

I'm not a libertarian, but I'd rather watch David Boaz and William Niskanen discuss economic policy from a libertarian perspective than watch Lanny Davis and Dick Morris trade talking points. I'm not an isolationist, but late at night, flipping through the channels, I'd probably stop to watch smart isolationists like Bill Kauffman make the case against American overseas involvement. I'm not a socialist, but if there were a Dissent channel featuring Michael Walzer and his allies, I'd watch it, if only to exercise my mind and challenge myself. (If there were a neoconservative channel, featuring Dick Cheney and Richard Perle and Douglas Feith, I'd keep surfing.)

If the audiences for such political worldview channels were too low for cable TV companies, then maybe streaming video from Web sites could achieve the same outcome. The point is that principled political discussion needs to make the leap from the dying print media and blogs to the audiovisual realm. If it doesn't, then American public discourse in what, despite hype about the blogosphere, remains the most influential medium may continue to consist of fake wrestling matches pitting professional Democratists against professional Republicanists. Over and over and over again.