I now pronounce you happily divorced

Celebrating the end of a marriage: Hideously tacky or harmless fun for the brokenhearted? 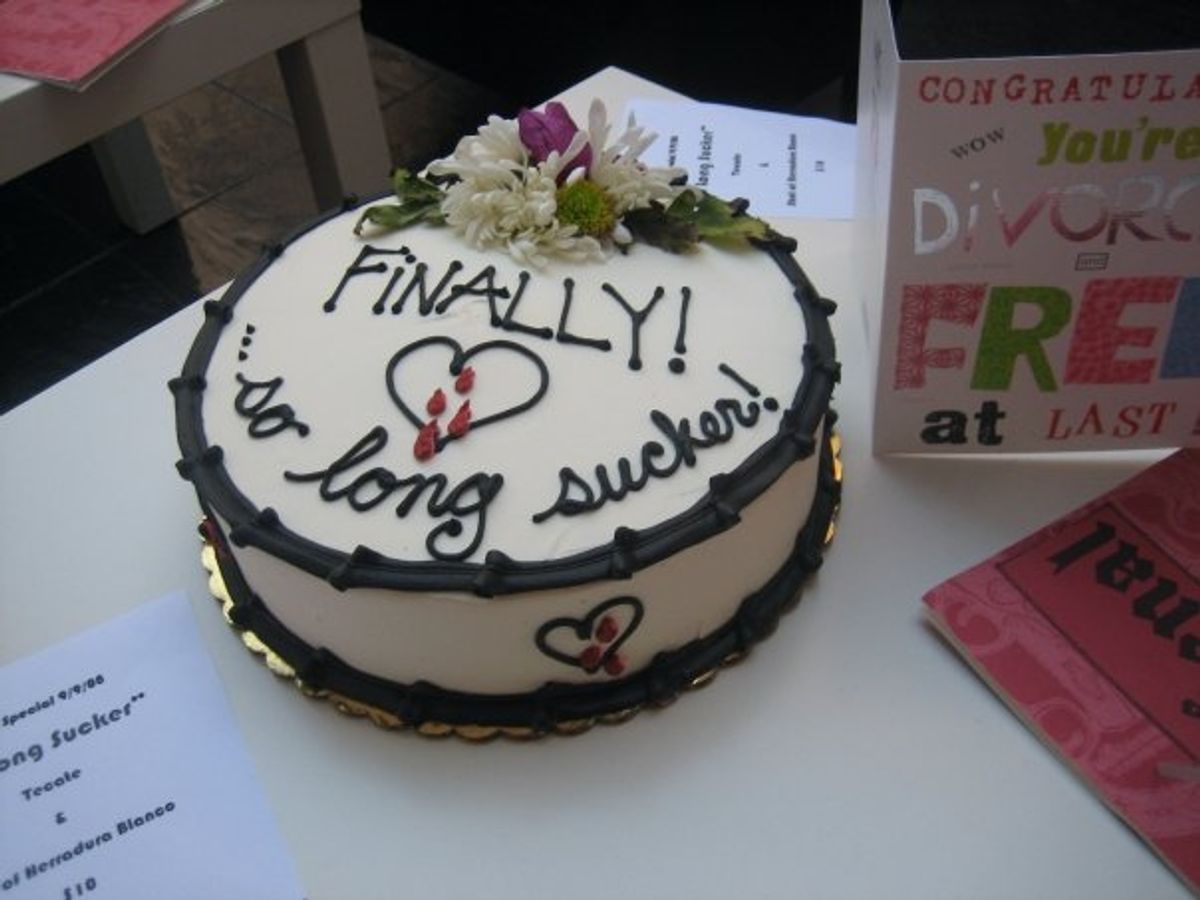 If you've watched your friends and family members go through divorce – or experienced it yourself – you know that people have a whole passel of coping responses. From crying jag-ridden despair to scorched-earth level rage to spring-break like exuberance, there's no reaction we haven't seen – frequently all from the same person.

And, given our near-fanatical cultural fascination with weddings, it makes a certain amount of sense that some people might choose a similar degree of ritual to mark the process of becoming unhitched. But where's the line between "closure" and "tacky." Maybe the tipping point is celebrating one's soon to be single status by throwing a soiree.

Salon wrote about divorce parties back in 2007, but the trend has just hit the Daily Mail, whose delicate sensibilities are deeply offended. "Could there be anything more shallow and trivial?" opines Virginia Ironside (who recently bitched about what a shitty present it was when a friend made a charitable donation in her name). Comparing a shindig for the dissolution of one's marital contract to "celebrating a miscarriage," the divorced Ironside chronicles the "ghastly conflicting emotions" that accompanied her own breakup yet seems incapable of permitting anyone else anything different. Instead she sees getting your companions together for some liberating onion dip as proof that "you’re the sort of person who gloats when disasters happen or friendships fail."

Adding fuel to the scandalized fire, however, is the notion of profit from pain. There's money to be made in relationship wreckage, whether in the form of "Free at Last" party favors, stabby cakes or – the ultimate jackpot – swag grabbing. Declaring this week that gifting should no longer be limited to weddings and babies, British retailer Debenhams announced it's launching a divorce registry -- a move British Marie Claire pondered might "only trivialize this serious and sad event."

The division of assets is considerably less fun than its blending, and inevitably, someone winds up a Mr. Coffee short in the deal. So putting out a call to one's friends – likely the same people you've been weeping into your Cuervo with anyway – is in many ways a practical response to a situation that's already likely short on dignity. It's also, when viewed from another lens, a seriously cold-blooded retail exploitation of what's right up there on the list of devastating life experiences. Debenhams spokesperson Ruth Attridge told Marie Claire: "We are not encouraging people to get divorced, but unfortunately it is a fact of life."

The divorce party may not be everybody's thing, just as some prefer a quiet elopement to an elaborate, ruffle-strewn wedding. But it seems that implicit in the discomfort with the breakup fete is the assumption that such a gathering would involve badmouthing the ex and, inevitably, hurting the progeny of the ill-starred union. But it is entirely possible – maybe even healthy – to mark a new phase of life in the company of loved ones in a way that's positive and affirming. If acknowledging the passing from one stage of life into another – whether via the gifting of a toaster or an "I Will Survive" sing-along -- helps someone heal through heartbreak, it's not automatically an insult to marriage that preceded it, the two people who participated in it, or the institution itself. And if Page 6 has taught us anything, it's that one doesn’t need to host a bacchanal to have an ugly divorce.