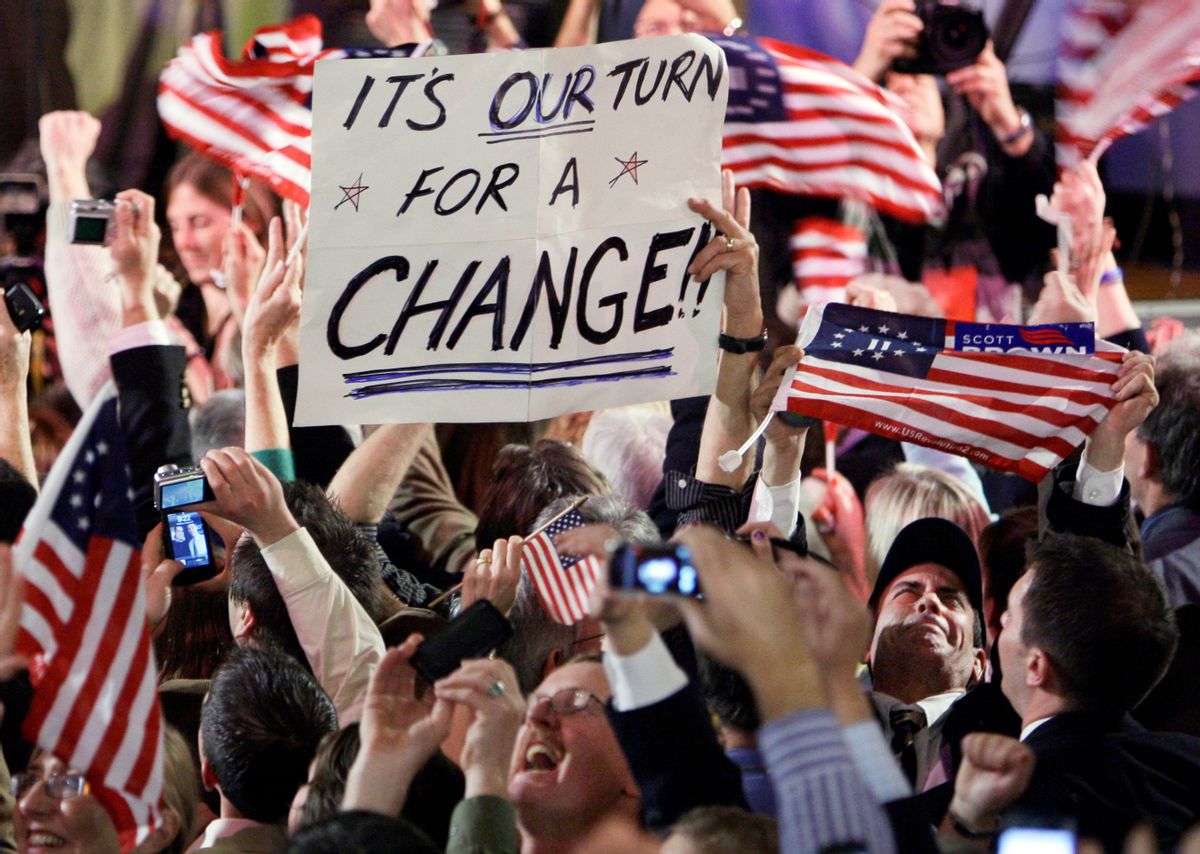 Pick any overwrought reaction to Scott Brown's defeat of Martha Coakley in the Massachusetts Senate special election Tuesday night, and chances are, some part of the Democratic establishment has already had it.

Which means that as the political world comes to terms with Brown's victory, Democratic leaders on Capitol Hill and in the White House have two urgent tasks: One, figure out how to keep their policy goals on track, and two, figure out how to keep everyone around them from completely and totally freaking out. Getting the first chore done, obviously, depends on the second one.

The immediate policy question is healthcare reform. The special election -- which Massachusetts officials held as late as possible to try to buy time for interim Sen. Paul Kirk, a Democrat, to help push the healthcare bill into law -- came right in the middle of talks to try to merge the different versions of the legislation that the House and Senate have each passed. Different factions in the House hate different parts of the Senate bill for different reasons, and vice versa; combining the two bills was already tough work, and Brown's victory made it harder. Because Republicans will control 41 votes once he arrives, the GOP can block the Senate from passing the bill again after negotiations wrap up. Aides say the most likely tactic to push the reform proposal through is for the House to just pass the Senate bill, unchanged. That would send it to Obama to sign, because each chamber would have passed the same legislation, but it would also infuriate House progressives (who think the Senate bargained away too much of the bill's force) and conservatives (who prefer the restrictions on abortion rights in the House bill) alike. Afterward, some of the differences between the two bills could be addressed in separate legislation that, using budget reconciliation rules, could pass the Senate with only 51 votes. Assuming, that is, that the House can be persuaded to go along with the scheme.

Democrats tried to put a brave face on the whole thing. "We have to resolve some differences, establish some priorities, make some decisions," House Speaker Nancy Pelosi told reporters Tuesday. "And that's what we're doing. Whatever happens in Massachusetts, we have to do that. And whatever happens in Massachusetts, we will have quality, affordable healthcare for all Americans, and it will be soon." That won't be as easy as she makes it sound. By the time the polls were closing Tuesday night, no decisions had been made on exactly how to move forward. Senate Democrats planned to meet for what will surely be one of the most depressing catered lunches in the history of the Capitol on Wednesday, and figure out what comes next. Leadership aides say they'll try to remind wary lawmakers that they've all voted for healthcare reform already; scrapping the whole thing now won't help bail them out politically.

And already, some Democrats were trying to quash the impulse Bayh and Lieberman had Tuesday, and rejecting the idea that the solution for 2010 would be to play dead. "What people are upset about is a lack of leadership and a lack of solutions -- not doing too much," said Rep. Tom Perriello, a freshman Democrat from southwestern Virginia, who is one of the GOP's top targets for defeat in November. "There's certainly an omnipresence of risk aversion among politicians that prevents us from doing what's necessary. We need wartime consiglieres, not risk-averse politicans right now." Perriello won election in 2008 by defeating a six-term incumbent Republican by 727 votes -- you might expect him to be one of the most risk-averse politicians out there. But he told Salon Tuesday he wanted more action, not less: "We should stop worrying about protecting our own jobs, and start worrying about protecting the jobs of the American people."

Though Washington convulsed with recriminations Tuesday, focusing too much on Coakley's own weaknesses would also be a mistake. "She ran a shitty campaign; there is an anger and frustration out there ... it was a perfect storm for this to happen," one Senate Democratic leadership aide said. "It would be arrogant of us to not acknowledge the factors -- but I also don't think that we should look at this and say this is a national trend, this is how all the 2010 elections are going to go, and cower." There will be plenty of pressure from outside allies to hold that line. "When it comes to the need to make good healthcare affordable, nothing is different today than it was yesterday," said Richard Kirsch, national campaign manager for Health Care for America Now, a labor-backed group supporting reform. "Congress must keep going and finish reform right ... The people of Massachusetts already have benefit from healthcare reform. It's time the rest of the country had the same access to good, affordable care." The Progressive Change Campaign Committee and some liberal allies blasted an e-mail to 2 million people calling for a more aggressive, not less aggressive, effort to push a healthcare bill with a public insurance option through the reconciliation process. Within an hour, 10,000 people had signed their petition.

Top Democratic officials say they've realized -- albeit belatedly -- that Brown won by channeling the populist anger that helped Democrats win independent voters in 2006 and 2008, and that's killing them with the same voters as the governing party now. "We obviously have to be more aggressive in defining the differences between us and them," one senior Democrat said. Senate campaign aides in Washington are undertaking a "forensic examination" of all their candidates around the country, looking at whether they're trying to talk to independent voters. Look for more anti-Wall Street rhetoric -- like the attacks on Brown that came too late in Coakley's campaign -- from the White House on down. For all the Republican joy these days, Democrats say they think they can still paint the GOP as the party that sides with financial fat cats instead of regular people; most Republicans, for instance, came out against Obama's call for a fee on banks to recoup federal aid they've gotten, and every House Republican voted against new financial regulations that chamber passed last month.

After all, focusing on creating jobs and helping the rest of the economy recover as quickly as Wall Street has is exactly the kind of policy that makes for good politics. One senior Democratic strategist, closely allied with the White House, says the party needs to deliver something tangible for voters, to have something to show for their control of government. "You need to listen to voters," the strategist said. "There's a lot of anger out there. They want to see action, they want people in Washington to address their concerns." It's shocking, in retrospect, that it took the loss of a seat Democrats had held since 1952 for the party to realize that.