The U.K.'s chocolate war gets personal 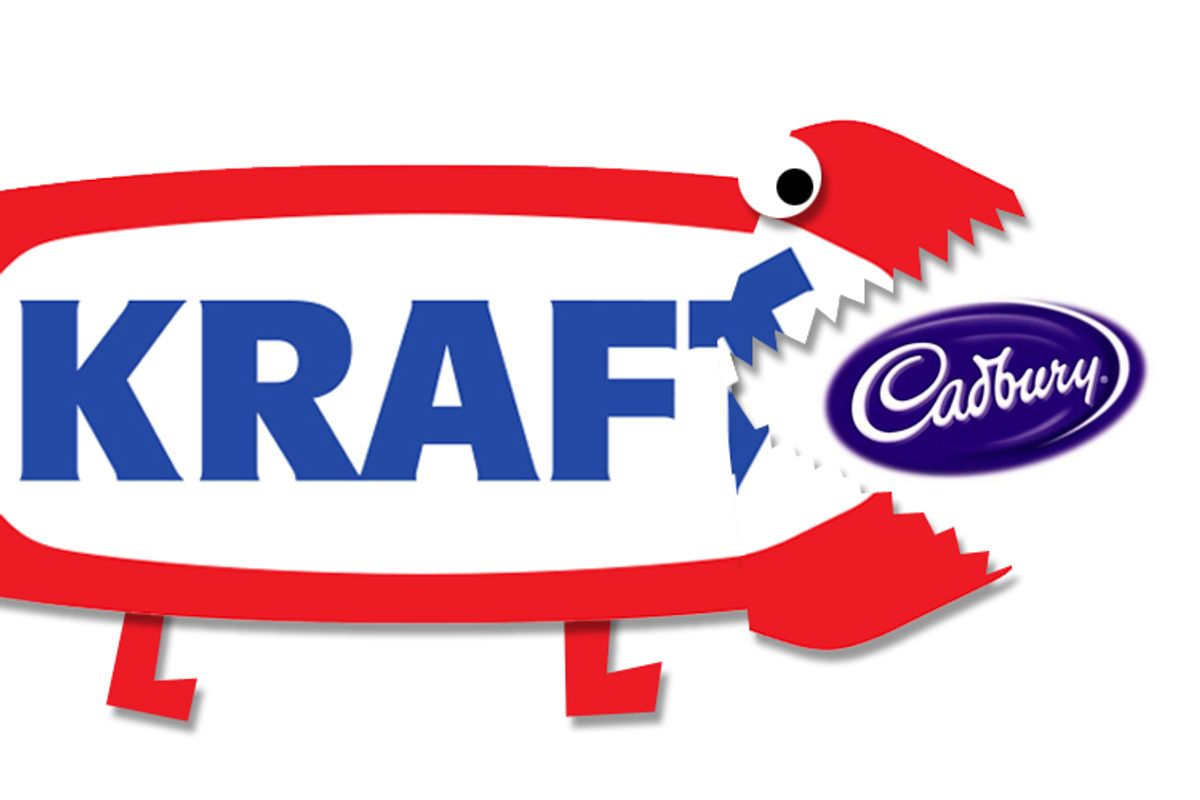 Kraft's $19.5 billion takeover bid for the beloved British candy institution Cadbury -- to make it the world's largest candy maker -- is ripe for puns: just try to find a report that doesn't riff on the idea that Kraft "sweetened" the deal after their initial bid, a paltry $17.1 billion. Amidst the jokes about Velveeta-filled Creme Eggs, however, the public response to the merger has been fiercely emotional. Cadbury employs over 6,000 people in the United Kingdom, and the labor union Unite fears a takeover could threaten as many as 30,000 jobs, but it's not exactly clear whether that's the injury or the insult: Cadbury's sweets are a British culinary institution, from its creamy 95-year-old Milk Tray bon-bon line -- whose ads for decades featured a James Bond-lookalike delivering them to ladies – to its signature Creme Eggs. As Kraft prepares to eat Cadbury (or gobble it, devour it, chomp it; whichever you like), the chocolate maker has become a symbol of British identity in the face of a crass American attack. Salon gathered some reactions from around the media:

The Guardian reports that Richard Burden, Labour MP, likened the news of the takeover as "a kick to the stomach." And on twitter, thousands are venting frustration like the British author Jojo Moyes: "Watching Cadbury chairman defending the Kraft deal is making me feel sicker than if I'd eaten a dozen Creme Eggs."

For some, it's a matter of taste, as Kay Burley, a blogger on the UK site SkyNews.com writes:

"Will the lady still love Milk Tray after a U.S. company has its mitts on it? Let's face it, American chocolate is not a patch on ours. Hershey's and the like can be up in arms as much as they want, it is a fact that our chocolate tastes better, it just does. Will they honour Creme Eggs at Easter? Will my Curly Wurly still be chewy and chocolatey in equal measure? When it comes to the Crunchie, will their version or Rose's grow on me? I'm not sure."

On Epicurious.com, Food Editor Sarah Kagan tries to offer some solace to Cadbury lovers by pointing out that although American chocolate does taste different, particularly Hershey's, which already manufactured Cadbury products for the U.S. market, the recipe is unlikely to cross the Atlantic. Kagan writes:

"In the U.K., milk chocolate must contain at least 20 percent cocoa solids, while in the U.S. the percentage can be as low as ten. Hershey's also says it tailors its Cadbury recipes to American tastes for a sweeter product."

But if it seems odd that chocolate should so capture the British sense of national identity, it is even more so in the face of other, more substantive losses of national production to international buyers. As Ian King of the Times of London explains:

In this time, the majority of Britons have stood by in silence. Yet, bizarrely, the country is now up in arms over the takeover of a chocolate maker by an American company notorious for selling plastic cheese and processed meat."