Whatever problems the Democratic Party has, kowtowing to the left is not one of them 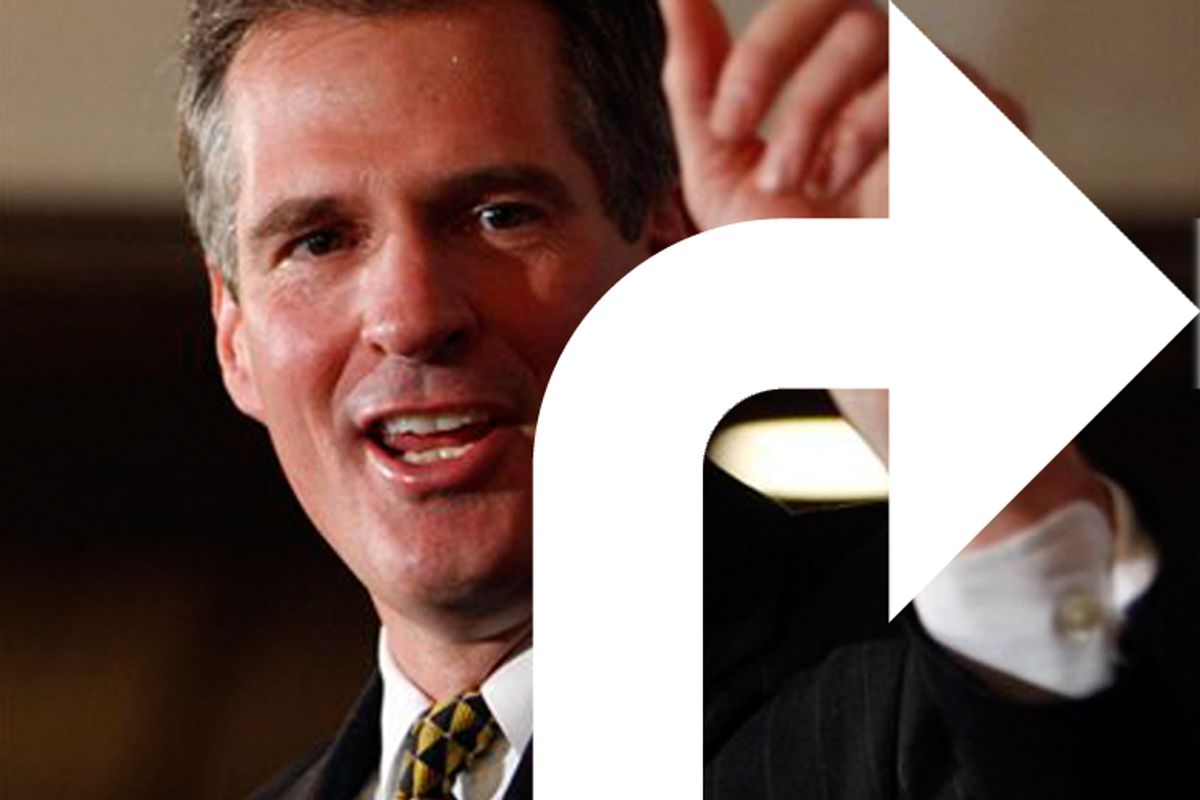 I have a contribution this morning to the New York Times examining the Scott Brown victory, and I'll post the link to it once it's up.  But for the moment, I want to address two equally moronic themes emerging over the last couple of days which seek to blame the omnipotent, dominant, super-human "Left" for the Democrats' woes -- one coming from right-wing Democrats and the other from hard-core Obama loyalists (those two categories are not mutually exclusive but, rather, often overlap).

Last night, Evan Bayh blamed the Democrats' problems on "the furthest left elements," which he claims dominates the Democratic Party -- seriously.  And in one of the dumbest and most dishonest Op-Eds ever written, Lanny Davis echoes that claim in The Wall St. Journal:  "Blame the Left for Massachusetts" (Davis attributes the unpopularity of health care reform to the "liberal" public option and mandate; he apparently doesn't know that the health care bill has no public option [someone should tell him], that the public option was one of the most popular provisions in the various proposals, and the "mandate" is there to please the insurance industry, not "the Left," which, in the absence of a public option, hates the mandate; Davis' claim that "candidate Obama's health-care proposal did not include a public option" is nothing short of an outright lie).

In what universe must someone be living to believe that the Democratic Party is controlled by "the Left," let alone "the furthest left elements" of the Party?  As Ezra Klein says, the Left "ha[s] gotten exactly nothing they wanted in recent months."  The Left wanted a single-payer system, then settled for a public option, then an opt-out public option, then Medicare expansion -- only to get none of it, instead being handed a bill that forces every American to buy health insurance from the private insurance industry.  Nor was it "the Left" -- but rather corporatist Democrats like Evan Bayh and Lanny Davis -- who cheered for the hated Wall Street bailout; blocked drug re-importation; are stopping genuine reform of the financial industry; prevented a larger stimulus package to lower unemployment; refuse to allow programs to help Americans with foreclosures; supported escalation in Afghanistan (twice); and favor the same Bush/Cheney terrorism policies of indefinite detention, military commissions, and state secrets.

The very idea that an administration run by Barack Obama and Rahm Emanuel and staffed with centrists, Wall Street mavens, and former Bush officials -- and a Congress beholden to Blue Dogs and Lieberdems -- has been captive "to the Left" is so patently false that everyone should be too embarrassed to utter it.  For better or worse, the Democratic strategy has long been and still is to steer clear of their leftist base and instead govern as "pragmatists" and centrists -- which means keeping the permanent Washington factions pleased.  That strategy may or not be politically shrewd, but it is just a fact that the dreaded "Left" has gotten very little of what it wanted the entire year.  Is there anyone who actually believes that "The Left" is in control of anything, let alone the Democratic Party?  The fact that Lanny Davis -- to prove the Left's dominance -- has to cite one provision that was jettisoned (the public option) and another which the Left hates (the mandate) reflects how false that claim is.  What are all of the Far Left policies the Democrats have been enacting and Obama has been advocating?  I'd honestly love to know.

And then there is the "Blame the Left" theme from Obama loyalists, who actually claim that the Democrats' problems are due to the fact that the Left hasn't been cheering loudly enough for the Leader.  I recall quite vividly how Bush followers spent years claiming  that the failings of the Iraq War were not the fault of George Bush -- who had control of the entire war, the entire Congress, and the power to do everything he wanted -- but, rather, it was all "the Left's" fault for excessively criticizing the President, and thus weakening both him and the war effort.

To insist that the Democratic Party's failures are not the fault of Barack Obama -- who controls the entire party infrastructure, its agenda, the news cycle, and the health care plan -- we now hear from Obama supporters a similar claim:  it's all the Left's fault for excessively criticizing the Leader.  A couple of days ago, Josh Marshall promoted -- and Kevin Drum endorsed -- a post that made this claim:

And we can look no further than Howard Dean, and MSNBC, and Arianna Huffington, and, yes, some columnists at the Times and bloggers here at TPM--you know, real progressives--who have lambasted Obama again and again since last March over arguable need-to-haves like the "public option," as if nobody else was listening. They've been thinking: "Oh, if only we ran things, how much more subtle would the legislation be," as if 41 senators add up to subtle. Meanwhile the undecideds are thinking: "Hell, if his own people think he's a sell-out and jerk, why should we support this?"

The reason "the Left" criticized the Iraq War was because . . . they thought it was a bad thing and thus opposed it.  The reason some on the Left have been criticizing the health care plan and other Obama policies (the ones I listed above) is because . . . they think they're bad things and thus oppose them.  For instance, health care opponents believe that forcing Americans to buy private insurance that they can't afford and/or do not want is bad policy and will harm the Democrats politically.  That's what rational citizens do:  they support proposals that they think are good and oppose the ones they think are bad. What are people on "the Left" supposed to do:  go on television and into their columns and lie by pretending they support things that they actually oppose, all in order to sustain high levels of affection and excitement for Barack Obama?  Someone who would do that is what we call a dishonest propagandist and party loyalist, and, in any event, is unlikely to have any credibility with anyone beyond already-converted, fellow Obama admirers.

A political party is actually much healthier and stronger when criticisms of the Leader are permitted.  Ask the Republicans circa 2005 and 2006 about how a party fares when party-loyalty and leader-loyalty trump all other considerations.  Moreover, if a political party adopts a strategy of ignoring its base, as the Democrats routinely do, it's an inevitable cost that the base will become dispirited and unmotivated.  As Darcy Burner put it yesterday:  "Perhaps if the Democratic base doesn't show up to elect Coakley, party leadership should consider *trying to appeal* to the base."  There's a reason it's called "the base" -- it's because it's the foundation of the party -- and, as the Republicans never forget, there is a serious cost to ignoring or spurning them.

As I note in my NYT contribution today, the reasons for the Democrats' failings generally -- and the Scott Brown victory specifically -- are complex, and shouldn't be simplified in order to declare vindication for pre-existing beliefs (Obama loyalists:  it was all about Coakley!; right-wing Democrats:  it's all the Left's fault!; Republicans: it's a rejection of liberalism!).  But whatever else is true, the Left, as usual, has very little power, both within the Party and in general.  Blaming them for the Democrats' failings is about as rational as the 2006 attempt to blame them for the collapsing Iraq War.  The Left is many things; "dominant within the Democratic Party and our political discourse" is not one of them.

All that said, and as horrible as the Democrats have been all year, the most amazing -- and depressing -- aspect of all of this is how Americans have so quickly forgotten how thoroughly the Republicans, during their eight-year reign, destroyed the country.  Whatever the source of our national woes are, re-empowering that faction cannot possibly be the answer to anything.

UPDATE:  The NYT forum on last night's election is here; my contribution is currently at the top.

UPDATE II:  Noting that even reasonable conservatives like Stephen Bainbridge are saying things like: "Obama and the Congressional Democrats (especially in the House) governed for the last year as though the median voter is a Daily Kos fan," Andrew Sullivan writes:

This must come as some surprise to most Daily Kos fans.  But if one had traveled to Mars and back this past year and read this statement, what would you assume had happened? I would assume that the banks had been nationalized, the stimulus was twice as large, that single-payer healthcare had been pushed through on narrow majority votes, that card-check had passed, that an immigration amnesty had been legislated, that prosecutions of Bush and Cheney for war crimes would be underway, that withdrawal from Afghanistan would be commencing, that no troops would be left in Iraq, that Larry Tribe was on the Supreme Court, that DADT and DOMA would be repealed, and so on.

Exactly.  Of course, none of those things has happened, precisely because the Democrats under Obama (and before) have been doing everything except "governing from the Left."  But our political discourse, as usual, is so suffuse with blinding stupidity that this clichéd falsehood -- Democrats have been beholden to the Left -- will take root as Unchallengeable Truth and shape what happens next.  That's already happening.