As a writer, I expose my deepest insecurities all the time. But could I really strip naked for a magazine -- at 44? 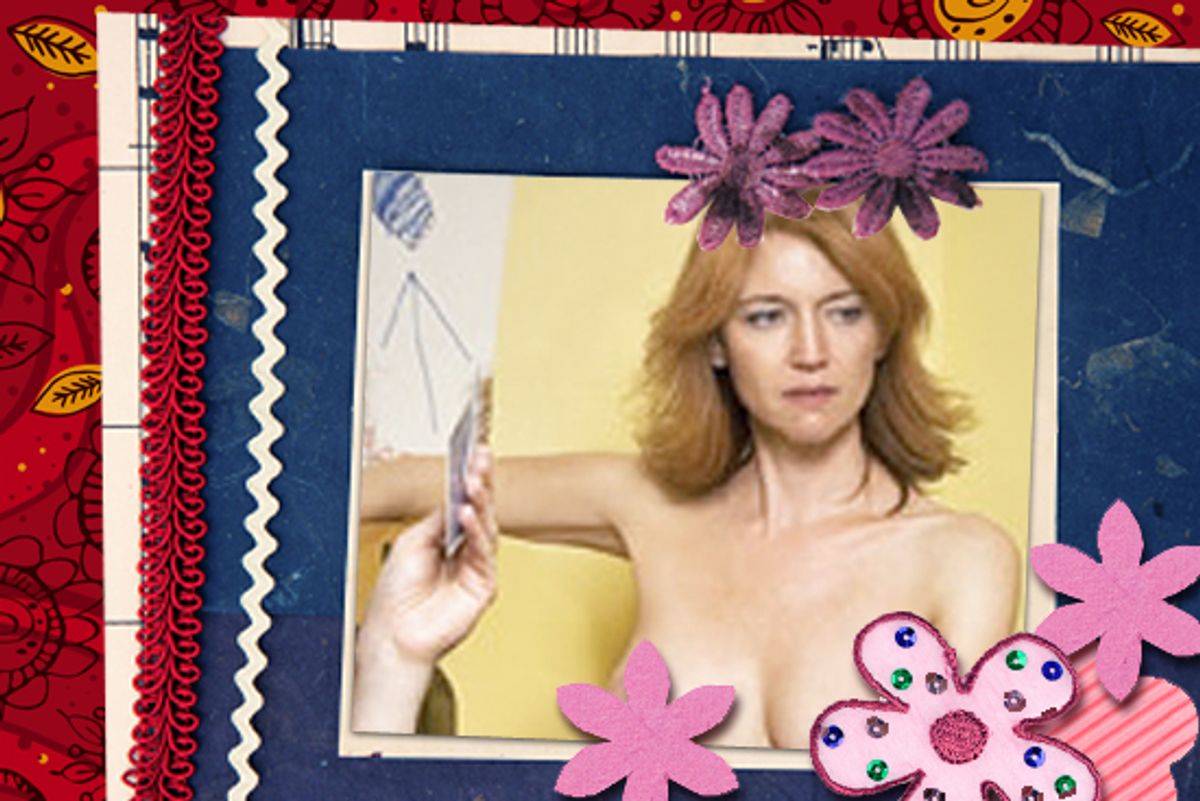 This isn't one of those stories about how empowering it was to pose naked for a magazine. You've read that one already. It usually involves someone who falls just slightly out of the range of superhumanly gorgeous, striking a blow for "real" women everywhere. "Model who isn't insect thin gets naked for Glamour" -- edgy! Miss Universe goes unretouched -- keeping it real! "I am showing the world my feminine strength by ditching my underpants!"

Well, that's not why I did it. And that's good, because that's not what happened. So when you see my friends and me nude in New York's Time Out this week, don't assume I'm making a big statement on behalf of my sex, or presume I'm trying to be an example to anybody else. Get your own self-esteem role models, girlfriend.

Why, then, did I disrobe? It's not like I usually go in for exhibitionism -- I've never even worn a bikini. When, throughout my 20s and 30s, friends were working as strippers and posing nude in men's magazines, I never once considered joining their ranks. I wasn't a naked-getting kind of woman, any more than I'm a NASCAR-driving or oil-fire-putting-out one. I harbor no delusions of being photogenic either. For the author picture for my recent book, the photographer took well over 300 shots and informed me, "I wouldn't have picked any of them."

But I do like looking at nude pictures, and I'm an unabashed fan of Time Out's Naked New Yorkers pictorials. Far from the abundantly retouched, trying-too-hard stuff out there, they represent both sexes, a variety of ethnicities, sexual orientations and body types, in tableaux that are always funny and irreverent. An actor poses with his pants down in the park. A woman sits on a chaise, surrounded by well-wishers. If you're going to be naked, you ought to be having a good time.

A lot of people agree -- when Time Out placed the call for more subjects, it was deluged with volunteers. One of them was my friend Stacey, who wrote to the magazine suggesting it photograph her poker group, which happens to consist of a friendly bunch of local moms. "I'm living my life more boldly than I ever have before," Stacey told me later, "and so I wanted to take that to the next level." The magazine liked the idea and started coordinating the shoot. As it turns out, some of those poker moms decided that stripping for a magazine wasn't exactly on their bucket list, so Stacey started looking for other participants. As a member of the poker group's sister posse of barhopping moms, I decided to join them. My friend Jessica promptly did likewise. "Why not?" she said.

I agreed. Like most of my social circle, I expose myself all the time anyway. I dwell in a world of people who write memoirs about our dysfunctional families and tell jokes about our awkward teen years and write songs about our heartbreaks. And you can't make a career of expressing the most personal, intimate aspects of life -- and consequently being rejected and criticized for it on a regular basis -- without developing extraordinary coping mechanisms. Or, as a playwright friend recently said after a particularly vitriolic critique, "And so, another little part of me goes dead inside."

The challenge is to not become completely dead inside -- just dead enough to keep doing what we do without pharmaceutical intervention. That's why the idea of getting naked for public display in a different way, the non-metaphoric kind, intrigued me. I can blithely crack jokes about my deepest pains, but I'm not so cavalier about showing my body. And so, taking to heart the maxim that you should do something every day that scares you, I decided to drop not just my trousers but also my defenses. The fact that I'd be doing this with friends -- strong, supportive and deeply ribald fellow moms -- made the notion go down a lot easier. Besides, as someone who traipses through life looking for frozen metal poles upon which to plant her tongue, I never met a dare I could refuse. (You should see how much pie I can put away when my pride is at stake.)

Unschooled in the art of nudity, my first order of business was to call in my experts. A friend who'd appeared in Playboy coached me on how to make the "Barbie toe" and position my ass in a chair for minimum squish. A makeup artist tutored me on the importance of self-tanner. But all the glotion in the world can only do so much for an average person, and I know that. As the time approached for me to bare myself on every newsstand in the city, my physical imperfections began to scream -- from the gray at my roots to the lines around my mouth to the breasts and belly that went to hell and back after childbirth to my poor left foot, which is a half inch larger than my right one. It began to seem less like a lark and more like a suicide mission. When I told my best friend about my plans, she asked, "Trying to attract a creepier class of Internet predator, Miss Kardashian?"

The day of the shoot, as I dropped my daughters off at school, I kissed them and told them to wish me luck. "I'm nervous," I admitted. "Mom," the 5-year-old said, patting her little hand on my back, "it's just boobies." That kid's got better perspective than Brunelleschi.

That afternoon, I went to my local Dominican salon for a blowout. My hair, after all, was the entirety of my wardrobe. As I gesticulated to my non-English-speaking stylist in the international sign language for "loose, Kate Winslet-like waves," she looked at me blankly. "Movie star," I said, adding a quick back-and-forth head shake and the words, "Not Farrah." An hour later, I headed with Jessica to Stacey's house, sporting a feathery do that would have earned instant admittance into Charlie's coterie of Angels.

At Stacey's, Jessica and I were greeted by the final member of our quartet, Aryn, for a little wine, a little conversation and a little group nudity. As Stacey uncorked a merlot, the photographer, Greg Endries, arrived with an inspired idea for the shoot: As if to beat our critics to the punch line, it was the iconic image of dogs playing poker. Jessica got the plum role of the ace under the table player, Stacey was her accomplice, and Aryn and I brought up the other side of the table as the skeptical opponents. I was to be the beagle.

And then we took all our clothes off. Full monty. Starkers. Kits out. (Surprising side effect of nudity: Britishness.) It wasn't so weird; kind of like when you're in the group dressing room at Loehmann's and everybody's focused on the task at hand – in this case, playing a tense, clothing-free and canine-inspired card game.

The shoot lasted a half-hour. The bottle of wine emptied; the photographer packed up and went home. That's when finally, alone and naked, the four of us ladies made tender yet surprisingly innovative love until the break of dawn. OK, not really, but I figured if you've read thus far, it was likely in the hope of such an outcome.  Actually, what we did was put on our clothes and show off our shoes. Mine were a pair of sky-high gold mesh Marc Jacobs sandals clearly designed to be worn with nothing but a wanton smile. Maybe we'd all seen enough girlie mags to make aesthetic assumptions, but independent of each other, we'd brought our sexiest, most expensive heels -- despite the photographer's insistence that we be totally naked.

And until today, that was pretty much that. I've spent the last few weeks feeling like someone who's jumped from a plane but hasn't yet pulled the ripcord -- I've made the leap, but don't know how I'll land. I can report that when Greg sent me the photo a few days ago, I gasped when I saw it. There -- smack in the middle of it -- was my naked form. My below-the-waist bits are obscured by the table, so I guess there's one rubicon I can still cross. But my boobies belong to everybody now. It was jarring. It was also an image as playful and spirited and earthy as I'd hoped it would be. Though Greg -- and I -- would not dream of passing that image off as unretouched, I can attest it's a fair representation. "I want people to look pretty," he told me earlier this week, "but it's not overboard." We don't look like Photoshopped versions of womanhood; we look like the women I know we are (albeit glammed up). "It's great," my older daughter said. "Awesome," echoed the younger one, who still regards the place she gestated just a few years ago as her private property. "Why?" I asked her. "Because you're naked," she replied. That's why I like it, too. (To see the full picture, click here.)

Taking your clothes off, whether for a partner or a few friends or even just yourself, demands letting your guard down. It means accepting the possibility of judgment. At least usually when I get naked for someone, there's an implicit degree of trust and approval built into the deal. Not so when it's a stranger with a camera -- and, by extension, the entire magazine-reading, Internet-accessing public. So here it all is, world, my four-decades-old body and my prom night 1979 hairdo. I'm as ready for you as I've ever been. Because when I got naked that night at the poker table, I had to shed my protective, Gap-issued armor and frequently sarcastic demeanor to become just a body surrounded by other bodies. Bodies that can grow a baby and entwine with a lover and run a race and get dinged up and scarred along the way. That's all I ever am anyway, really. It's a difficult thing to admit and to share, especially when I usually have the luxury of being disembodied in front of a keyboard, where I can edit my thoughts and hide behind an avatar.

But life doesn't take place on my computer screen. If the choice is between doing and not doing, between having an experience and playing it safe, between showing myself and not, I'd prefer the former. The fear of looking foolish is a lousy excuse for missing out on anything. And if you ever need proof that it's not possible to die of embarrassment, permit me to direct you to any page from the book of my life.

That's why this isn't a story of how I took off my clothes and became all empowered by the experience. I came into this a reasonably confident, sexually active, bigmouthed working mother, which basically makes me every song Beyoncé's ever written. I'm already hustling my empowered ass off seven days a week. But underneath my clothes, I'm always still just my own soft female flesh. Showing that side of myself didn't change that; it didn't make me stronger or braver or better. It gave me something else -- it let me be, for a little while, vulnerable.