"Creation": The miracle of Paul Bettany

This story of Darwin's conflicted emotional life is a snooze, but its star makes for one great natural wonder 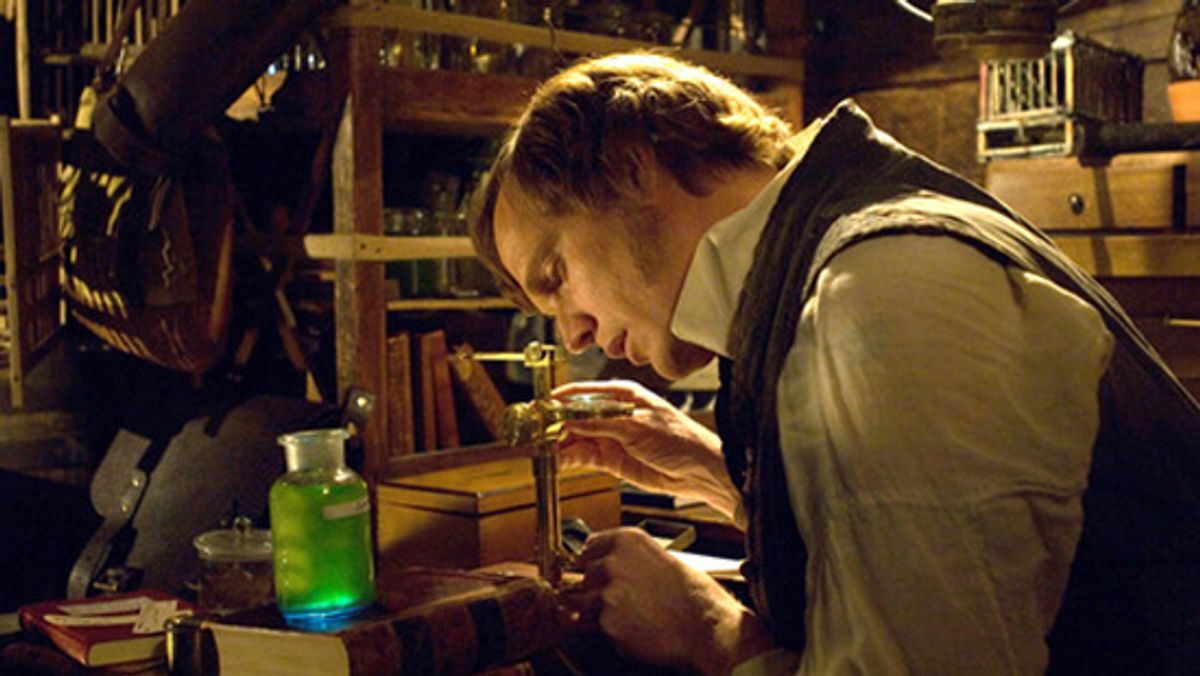 Jon Amiel's "Creation" — which tells the story of Charles Darwin's personal conflicts regarding science and religion, and of how those conflicts were complicated by his grief over losing a child — raises a number of thought-provoking questions. What if those first little swimmy sea creatures hadn't crawled onto dry land on miniature, tentative legs? What if our ape forebears had just stayed apes, instead of evolving into humans? What if a filmmaker could bring the interior struggle of a great man of science to the screen in a way that's not just a snooze-a-rama?

Some questions just can't be answered by science, and the quandary of why "Creation" is so poundingly dull is one of them. On the surface, "Creation" has so much going for it: Amiel has made a range of smart, entertaining pictures, including creepy thrillers like "Copycat" and exuberantly preposterous science fiction fare like "The Core." (He also gave us the terrific 1986 British TV miniseries "The Singing Detective.") The picture features two vibrantly attractive performers: Paul Bettany plays Darwin, and Jennifer Connelly (Bettany's spouse in real life) is his wife, Emma. The movie has a burnished, handsome look: Cinematographer Jess Hall's camera marvels at the wonders of nature and of English architecture, and we do too. Everything here looks so nice. What's not to like?

The story is promising, too. As it unfolds, we learn that Darwin has already made some pretty big scientific discoveries, but he's hesitant about unleashing them on the world in book form, knowing they'll rock the religion boat, big-time. Mr. D. is not just a man of science: He's a devoted husband, and father to a whole brood of moppets. But his favorite is clearly his eldest daughter, Annie (Martha West), a bright, inquisitive child with whom he can share his knowledge of, and delight in, the natural world.

But it becomes clear early on that something's amiss. Wife Emma, you see, is extremely religious. She has a deep respect and fondness for the local preacher man (played, with uncharacteristic dull-witted stiffness, by Jeremy Northam), and while she tolerates Charles' intelligence and dedication to the world of science, she'd rather believe (though this is never spelled out) that God made the universe and all the creatures in it in just six days, and on the seventh day packed the whole family up for a nice holiday in Brighton. This means Mrs. Darwin, wearing the fashionable center-parted hair and swishy hoop skirts of the mid-19th century, gets lots of opportunities to bang on her piano with obvious disapproval, occasionally sending a dagger of a glance in her husband's direction.

Maybe partly because his wife can't seem to stand him (and the movie never explains how they got together in the first place, although their marriage did endure), Charles spends lots and lots of time talking to Annie, teaching her things, laughing with her. Annie stays the same — she looks to be around 10 — but before our eyes Charles' hairline recedes and extends with the regularity of the tide. Astute filmgoers will quickly pick up on the code: When we see Bettany with a receding hairline, we know the little girl he's talking to is a ghost, a specter who has taken up residence in his own broken heart. When Bettany has a full and handsome head of hair, we're flashing back to the time when she was still alive.

That's not a bad device, and Amiel uses it intelligently enough. But maybe he uses it too much. Vast swaths of "Creation" are taken up with presenting slight variations on the same ideas and conflicts over and over again. The movie was written by John Collee, based on Randal Keynes' book "Creation: Darwin, His Daughter and Human Evolution." (Keynes is Charles and Emma Darwin's great-great-grandson.) But sad and obviously complicated as Darwin's situation was, there just isn't enough dramatic tension in the picture to make anything stick. After a while, the cheerful, smart little ghost child becomes an affront, a gimmick, instead of a tragic symbol.

Connelly bustles through the picture, in that tight-bun hairdo, with an almost unchanging straight-lipped expression. She's generally a lovely actress, but this role gives her little to work with. It really is Bettany's picture, and it's a shame that it isn't, on the whole, worthy of his talents: He's extraordinary here, which is barely a surprise. Bettany has never given a bad performance, if you don't count his throwaway evil-monk turn in "The Da Vinci Code" (and even that one's not so bad in the context of the dumb-bunny ludicrousness of the movie around it). I've been waiting for years, through the greatest hot-guys-at-sea movie ever, "Master and Commander: The Far Side of the World," through the charming romantic comedy "Wimbledon," through, well, "Creation" for Bettany to become a big star. (Bettany has another movie currently playing, "Legion," in which he plays a butt-kicking archangel.)

"Creation" doesn't show off Bettany as well as it should. In the movie's most piercing sequence, funny, beautiful and deeply mournful at once, Darwin makes the acquaintance of Jenny, an orangutan who's been whisked away from the jungle and forced to take up residence at the London Zoo. When he greets her, she's obviously depressed, curled up dejectedly in her little cotton dress. But as Bettany's Darwin speaks to her, plays with her, finds joy in communicating with her, she blossoms before our eyes. Bettany plays the scene so delicately, and yet with so much raw feeling, that it nearly caused me to burst into tears. For those moments, I was held deep in the spell of "Creation." That's what a superb actor can do, even when the highly imperfect art and science of moviemaking fail him.