The battle for Jane Austen 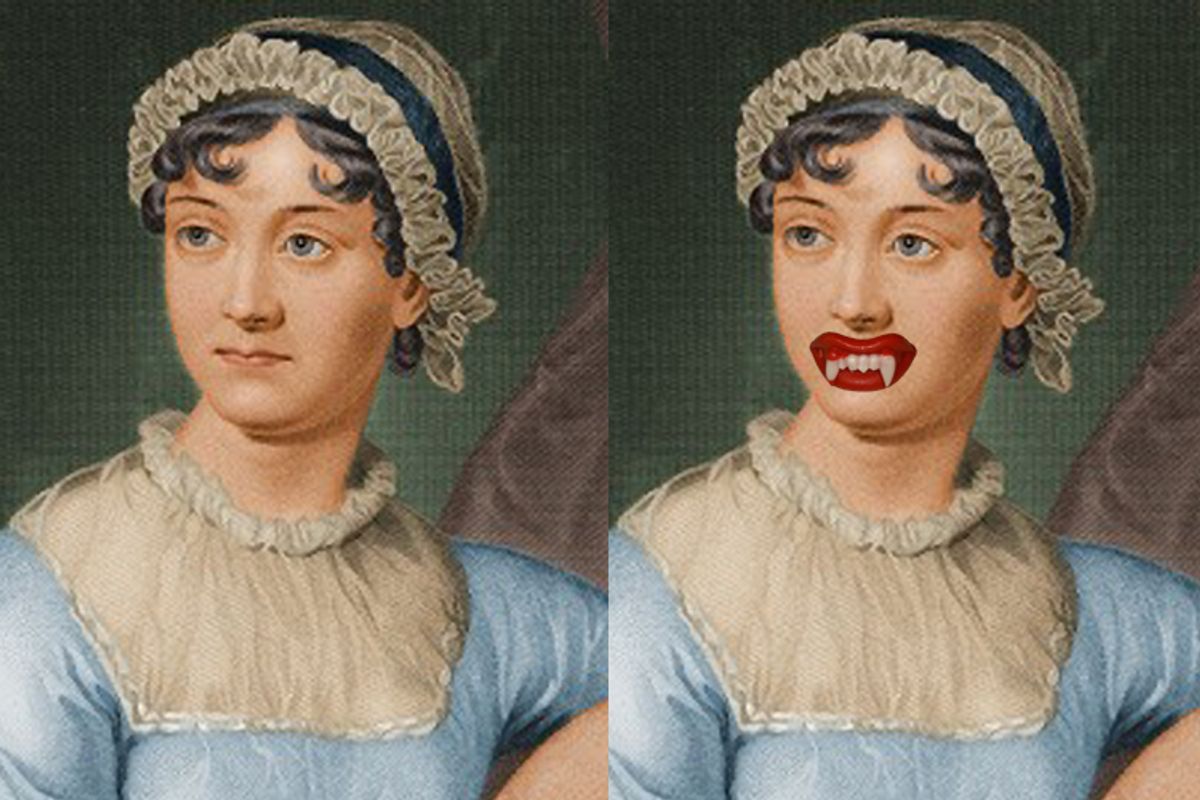 "The novels of Jane Austen/Are the ones to get lost in," wrote G.K. Chesterton, and millions of readers have done just that. Since 1995 in particular, when the BBC adaptation of "Pride and Prejudice" starring Colin Firth conquered untold numbers of female hearts, Austen and her (now) most celebrated creation, Mr. Darcy, have become touchstones for a certain strain of contemporary feminine longing. That the following year brought Helen Fielding's "Bridget Jones's Diary," which borrows its plot and hero's last name from "Pride and Prejudice," only cemented this idea in the public mind: Jane Austen is the grandmother of chick lit.

While she didn't quite invent the romantic comedy (Shakespeare's "Much Ado About Nothing," a clear inspiration for "Pride and Prejudice," can probably claim that honor), Austen surely conceived and perfected it in its modern form; no one has ever surpassed "Pride and Prejudice," and not due to any lack of trying. Still, literary achievement can hardly explain the Austen craze. Many books labeled "classics" can also be fairly called "beloved," but Austen is canonical in two senses of the word at once. Who else among the acknowledged greatest novelists of all time has inspired such an abundant and robust body of fan fiction? What other author's fan fiction gets published so extensively?

The Austenphile Web site the Republic of Pemberley lists 60 published "sequels and continuations" of "Pride and Prejudice" alone. Austen's five other major novels have their spinoffs, as well, though none so many as "Pride and Prejudice." That count doesn't even include "Pride and Prejudice and Zombies," a surprise bestseller last year and the first in a seemingly endless proliferation of classics mashups. It also doesn't factor in all the fiction in which Austen herself is a character, such as Stephanie Barron's mystery series in which the novelist plays detective. Or the newly published "Jane Bites Back," in which multiple publishing trends converge to make Austen a vampire who survives to this day in the guise of a lonely middle-aged bookseller in upstate New York, miffed by her posthumous transformation into a global brand. And then there's the subgenre of chick lit about contemporary women struggling to resign themselves to a dearth of Darcyesque beaux ("Austenland," "Me and Mr. Darcy"). We may love to get lost in Jane Austen's novels, but it's worth wondering if, by this point, they haven't gotten a bit lost in us.

Reading "A Truth Universally Acknowledged: 33 Great Writers on Why We Read Jane Austen" only deepens the mystery surrounding these phenomena. From the various essays in this collection, most previously published throughout the past century, we can see that being "slightly imbecile about Jane Austen" is a condition that predates not only the BBC adaptation of "Pride and Prejudice," but television itself. The novelist E.M. Forster described himself using that epithet in 1936 -- although he probably wouldn't have gone so far as to check into a resort in which one can simulate life in Regency-era England, like the heroine of "Austenland."

"A Truth Universally Acknowledged" (edited by Susannah Carson) reminds us that before all the lovelorn pining over Colin Firth in a soaked puffy shirt, Austen was read and admired by plenty of people -- men included! -- who considered literary merit a very serious matter indeed. Some have done so even as they marvel over the cultish allure of her novels. Martin Amis, of all people, cries out to know, "Why does the reader yearn with such helpless fervor for the marriage of Elizabeth Bennet and Mr. Darcy?" (Well might Amis ask how any novelist manages to make readers care about the fate of her characters; he might learn something.) Lionel Trilling recounts his amazement when 150 students applied for 30 spots in an Austen seminar he taught in 1973, and the "hysterical moral urgency" with which they petitioned to get in. C.S. Lewis, who never considered gravitas to be incompatible with a good read, nevertheless wrote in praise of the "hardness" of Austen's moral rigor.

Alongside these sober gentlemen are the obsessive "Janeites," the buffs, whom Henry James accused of turning Austen into "everybody's dear Jane," which is certainly a fit characterization of the Jane Austen in Michael Thomas Ford's "Jane Bites Back." Despite being a 200-year-old bloodsucker, Ford's Jane has none of the merciless wit the real Austen displayed in her fiction or in letters to her beloved sister Cassandra. Instead, this current-day Austen is all too banal and "relatable," coming home from a day in the shop to mope in her fluffy bathrobe with a book, a bar of chocolate and a glass of merlot. She even has a cat. When a suitor opens the door for her, "she couldn't help thinking how dashing he was. A true gentleman." It's hard to believe that with immortality and two centuries of experience the author of "Emma" would diminish into such a lusterless fuddy-duddy. Worse yet, Ford's Jane has been nursing an unpublished novel; limp excerpts from it -- full of the kind of wheezy melodrama Austen parodied in "Northanger Abbey" -- open each chapter.

Critics have been inveighing at length against the "mere mass of cozy family adulation" expressed by the garden-variety, tea-sipping Janeites since Marvin Mudrick published "Jane Austen: Irony as Defense and Discovery" in 1952. Irony (the real kind, not the Alanis Morissette variety) was Austen's predominant mode, as Mudrick pointed out, and this not only made her "almost inhumanly cold and penetrating" but also positioned her against "all the delusions intrinsic to conventional art and conventional society." That was the manly '50s speaking; by the 2000s, Austen became, in the popular mind, a wistful reminder of all the chivalrous pleasures of a long-lost social order -- a society that would have driven the average contemporary Janeite to insurrection if she actually had to live in it.

Like Dumbledore's mirror, Austen's fiction seems to have the ability to reflect whatever its readers most wish to see. Austen is the grandmother of chick lit, much as that fact may irk her highbrow admirers. But that's not all she is, and to persuade yourself that her novels are only about being courted by rich, handsome men well-versed in ballroom etiquette is to be as dangerously silly and frivolous as Elizabeth Bennet's youngest sister, Lydia. The chick-lit take on Austen is forever trying to subtract the brutal social and economic realities from her fiction (as well as ignoring the mortifications her heroines undergo), but there's yet another category of Janeite that doesn't want to take anything out. Instead, they prefer to add.

The recently published "Pride/Prejudice" by Ann Herendeen posits that before Elizabeth and Darcy united, they each had same-sex affairs: Elizabeth with Charlotte Lucas and Darcy with Mr. Bingley. Supposedly this explains why they were both so dead set against the marriages of their friends, although Austen's novel provides perfectly adequate, if a lot less titillating, reasons. Some readers may be disappointed to see Lizzy and Charlotte's trysts mentioned only in passing, while Darcy's bedroom romps with Bingley and a few other fellows (he belongs to a gentlemen's club in London -- a very, very naughty gentlemen's club) are described in considerable detail. The title of the book -- "slash" is a term for fan fiction featuring the romantic pairing of male characters who are ostensibly straight in the canonical original -- says it all. Within the first few pages, Bingley is archly whispering to Darcy, "Kiss me again, brute."

Despite such lapses, Herendeen does a better job than most of approximating Austen's style without aping it, and when Darcy and Elizabeth finally marry, she gives us the wedding night that has probably been the subject of more Janeite fantasizing than anything else. Even Amis expressed a wish for "a 20-page sex scene featuring the two principles, with Mr. Darcy, furthermore, acquitting himself uncommonly well." (Twenty pages -- really? You're stronger man than I am, Mr. Amis.) I must confess that I've never felt the lack of this scene, so I can't say whether Herendeen's version lives up to expectations, but it does involve an awful lot of talking.

For the kind of fan who writes "Pride/Prejudice" or "Darcy & Elizabeth: Nights and Days at Pemberley" or "Mr. Darcy's Diary" or, for that matter, "Mr. Darcy, Vampyre" (there are, in fact, two different series featuring an undead Darcy), there just isn't enough Jane Austen, and cranking out sequels and auxiliary works is the only response to an unquenchable craving for more. Since so many of these fans have difficulty even registering those elements of her work that don't amount to romantic wish-fulfillment and quaint gentility, you would think they'd be easily satisfied with the imitations, but this doesn't seem to be the case; none of them has been greeted with much acclaim. How often, when we get what we think we want, do we find ourselves obscurely disappointed? Perhaps one secret of Austen's charisma is that, like an accomplished flirt, she knows better than to grant her audience's fondest wishes: Her romances are not as passionate as the Janeites might desire, but neither is her morality as "cold and penetrating" as the sterner scholars portray it.

The final, most startling and most successful of the Austen spinoffs, "Pride and Prejudice and Zombies," constitutes a special category, since it's neither a sequel nor an attempt to imagine the off-stage action from the canonical novels. Instead, it's simply "Pride and Prejudice" (the text of which is in the public domain) with the occasional insertion of campy horror movie scenes. It's one moderately amusing joke, run pretty much into the ground. From the reports of a bookseller acquaintance, most of the people who buy it have no intention of reading it, they're just tickled by the cover art or want it for a gag gift. (A subsequent offering, "Sense and Sensibility and Sea Monsters" isn't selling very well, which tends to confirm that theory.)

I wouldn't be surprised, though, if the publisher of "Pride and Prejudice and Zombies" hasn't inadvertently hit upon the only real antidote to Austen's new reputation as chick lit's progenitor and therefore a strictly feminine taste. In the pop culture universe, zombies are rather a guy thing -- they exist primarily to be mowed down without remorse in video games. Zombie-based entertainment turns out to much easier to successfully churn out than Austen-quality fiction, and the true zombie aficionado has many, many other fine options to choose from when seeking to gratify his (or her) lust for slaughter and gore. "Pride and Prejudice and Zombies," in short, hasn't got much to offer anyone who's seriously into zombies because the vast majority of the book still consists of the courtship tribulations of the Bennet sisters.

However, you can read "Pride and Prejudice and Zombies" pretending that you're in it for the zombies or the laughs while secretly relishing Austen's sublime romantic comedy. At least, that's how I read it -- not, that is, with any pretense, but, as I went along, finding myself increasingly skimming over the interjections of horror and combat to get back to the real story. Not being a Janeite myself, I had no plans to reread the novel, and so this was like running into an old, neglected friend unexpectedly, only to be reminded how delightful she is and to ask yourself how you could possibly have forgotten that. The great advantage, the secret weapon of "Pride and Prejudice and Zombies," is that when you tire of the beheadings and the martial arts and the blood and guts, it's still "Pride and Prejudice." And you know that can't be bad.