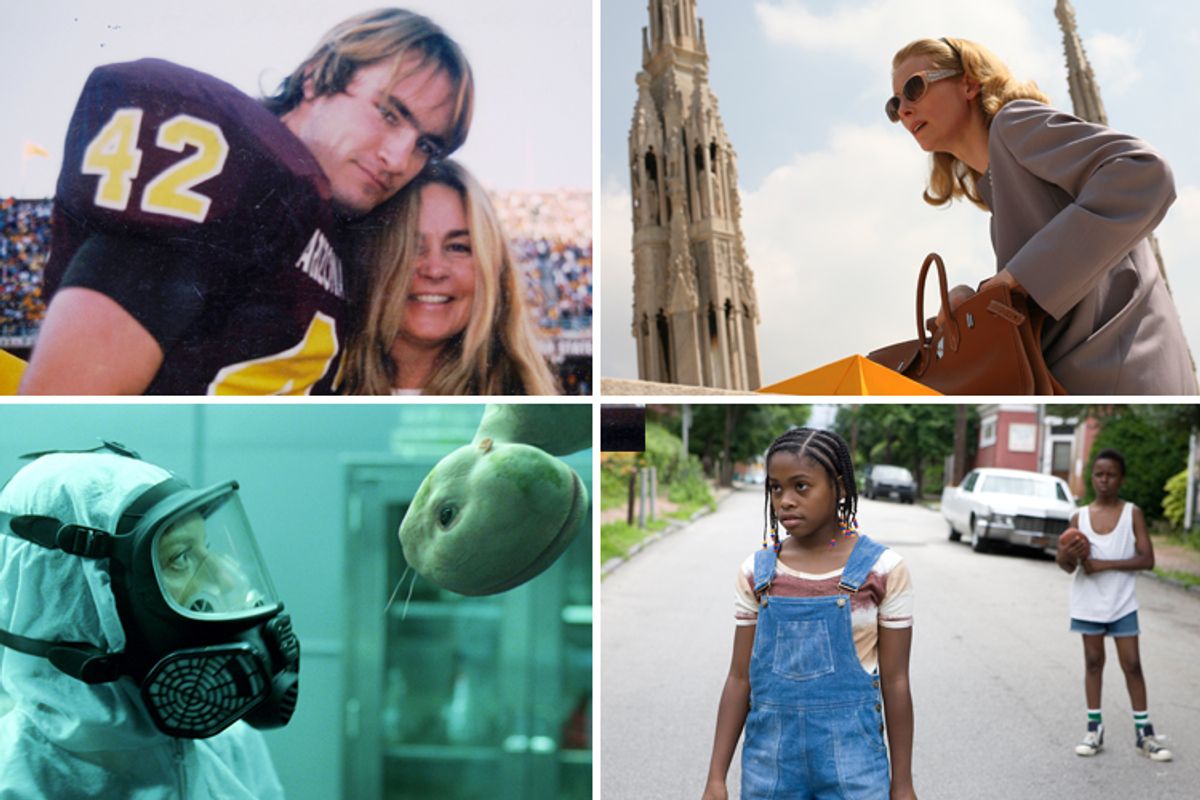 It's human nature to look for big changes in an institution that's been running on the same track for decades — helloooo, Massachusetts! I know it's been a cold winter, but huffing glue can lead to brain damage! — and the journalists tumbling into the Utah mountains over the next 24 hours are no different. On Thursday evening, we'll witness the kickoff of the Sundance Film Festival in its first year under new director John Cooper, after longtime head Geoff Gilmore's abrupt departure for a presumably rivalrous position at Tribeca Enterprises, the parent company of New York's Tribeca Film Festival.

In fact, Cooper worked closely with Gilmore for most of the last two decades, serving in recent years as Sundance's director of programming. He probably had at least as much to do with the final selection of movies for the festival as Gilmore did. So whether the most visible changes at Sundance this year really reflect Cooper's desire to put his own stamp on Robert Redford's annual ski-resort cinema showcase is a matter of debate. It's more than likely that this year's diverse, globalized and relatively serious Sundance roster reflects a bunch of other things, notably the shifting aesthetic and commercial landscape for independent film and the festival's gradual drift away from Hollywood-lite, gift-loungey starfuckerness back toward its DIY indie roots.

Gilmore's final year at Sundance was an exceedingly strange one, hitting near the very bottom of the current recession and overlapping with President Obama's inauguration. Industry observers (e.g., me) widely assumed it would be an abysmal festival from the movie-biz point of view, but perhaps a more interesting one artistically. That was partly true. Such buzzed-over films as "Brooklyn's Finest," "I Love You, Phillip Morris," "Spread," "Cold Souls" and "The Informers" either came and went in theaters without anyone noticing or haven't been released at all. But it was also a year that produced a reasonable quotient of modest successes — documentaries like "The Cove" and "The September Issue," narrative features like "An Education" and "Sin Nombre" — and one old-school festival surprise.

That big surprise, of course, was Lee Daniels' "Precious: Based on the Novel 'Push' by Sapphire" (screened at last year's festival simply as "Push"), which came out of nowhere to win both the audience and jury prizes and went on to gross a startling $45 million-plus at the box office. I haven't crunched the numbers down to the final detail, but I'm virtually certain that makes "Precious" the most financially successful Sundance award winner in the festival's history. While I don't expect Tanya Hamilton's Sundance 2010 feature "Night Catches Us" — set in Philadelphia's African-American community, circa 1976 — to replicate the "Precious" phenomenon, I can guarantee it'll get a lot of attention.

So on the one hand, Cooper's first Sundance features a new section for films made for budgets below $500,000 — he has said most of them cost less than $200,000 — along with a near-total dearth of quasi-Hollywood premieres. Nobody expects any near-term resurgence of the late-night bidding wars of years gone by, when overhyped movies sold for inflated prices in the back rooms of Park City restaurants, on the way to box-office disaster. ("Grace Is Gone," anyone? "Hamlet 2"? "Son of Rambow"? Didn't think so.) On the other hand, Sundance 2010 opens on the heels of one of the best box-office years in recent history, a fact that remains true even if you discount the recent release of what will soon become the most popular film in history (that one with the tall blue people and Sigourney Weaver smoking those healthful 23rd-century cigarettes).

So it's best of times, worst of times, etc. On balance this looks like a terrific Sundance lineup, light on dreary minimalism and middle-class indie navel gazing. Here are some of the storylines I see emerging as I wend my way to Park City. I'll be back here Friday morning with a report on the opening-night film, Rob Epstein and Jeffrey Friedman's "Howl," which stars James Franco as the young Allen Ginsberg in beat-era San Francisco.

Cut-price films from low-budget land While Sundance has long thrived on movies made on microscopic budgets, Cooper has made that official this year by inaugurating the festival's NEXT section, open only to movies with sub-$500,000 budgets. Prominent examples this year include Linas Phillips' likable, lyrical road movie "Bass Ackwards," Habib Azar's demented marriage farce "Armless" (it's actually about a guy who wants to get his arms chopped off), and Eyad Zahra's "The Taqwacores," adapted from Michael Muhammad Knight's book about the Muslim punk scene. (I'll bet you didn't know there was one.)

They long to be close to you More and more indie filmmakers will bypass theatrical distribution, take their movies right out of Sundance, SXSW and similar festivals, and bring them straight to their small but loyal audience via video on demand, Internet stream/download or some combination thereof. Phillips' "Bass Ackwards" (see above) will go out nationwide Feb. 1, just after Sundance wraps, by way of "major digital retailers" (I assume this means iTunes), cable VOD and "DVD on demand," with a conventional DVD release to follow.

Meanwhile, the festival's own Sundance Selects VOD label will release three Sundance films, simultaneous with their Park City openings, through various major cable-TV systems. Titles selected for the first round of releases are Michael Winterbottom and Mat Whitecross' "The Shock Doctrine," a documentary based on Naomi Klein's bestseller; "Daddy Longlegs," a new feature from micro-indie talespinners Josh and Benny Safdie; and "7 Days," a gritty, gruesome revenge-horror fable from French-Canadian director Daniel Grou.

The whole world is watching Although known around the world principally as a showcase for new American films, Sundance has tried to establish a global reach in recent years. While we're not talking Venice or Cannes here, the imported offerings have gotten better, and more surprising. Italian director Luca Guadagnino's ravishing family melodrama "I Am Love," co-produced by its star, Tilda Swinton, while one of the un-Sundanciest films I can imagine, is also among the highlights of this year's roster. The same goes for Jacques Audiard's prison drama "A Prophet," with its amazing performance from Tahar Rahim as a teenage Arab-French convict.

Other high-profile foreign flicks include French provocateur Gaspar Noé's "Enter the Void," reported to be a hallucinatory, violent journey through the mind of a dying drug dealer, and Chris Morris' "Four Lions," a ruthless farce about homegrown British Islamic terrorism. I am sworn to secrecy on the last film until its premiere, but let's just say OMFG.

Can we still blame everything on Bush? While Sundance built its '80s-'90s reputation as a foster parent to indie dramas of the Coen-Jarmusch-Soderbergh ilk, I would argue that in the 21st century it's been at least as much a launching pad for social-political documentaries. This year, Oscar-winner and Sundance perennial Alex Gibney returns with "Casino Jack and the United States of Money," his film on the Jack Abramoff influence-peddling scandal. Heidi Ewing and Rachel Grady of the Oscar-nominated "Jesus Camp" are also back with "12th & Delaware," which captures the street drama outside a Florida abortion clinic. Amir Bar-Lev ("My Kid Could Paint That") examines the death of NFL star-turned-war-hero Pat Tillman in "The Tillman Story," and a wide range of intriguing international documentaries stretch from Pakistan ("Bhutto") to the Russia-Georgia conflict ("Russian Lessons") and anthropology's sins in the Amazonian jungle (Brazilian director José Padilha's "Secrets of the Tribe").

Star rookies and grizzled veterans Two of America's best female indie filmmakers — who also happen to be among our best filmmakers, period — return to Sundance this year. Nicole Holofcener follows the underappreciated "Friends With Money" with her new "Please Give," featuring Catherine Keener and Oliver Platt as a Manhattan couple at war with their neighbors. Is Holofcener — who's already something like her generation's Woody Allen — taking on the Woodman on his own turf? Then there's Lisa Cholodenko, who seemed to go underground after "Laurel Canyon" in 2003 but resurfaces here with "The Kids Are All Right," featuring Annette Bening and Julianne Moore as a snuggly L.A. lesbian couple whose kids finally meet their biological father (played by Mark Ruffalo, who's the default setting for all such quasi-deadbeat roles).

Speaking of Ruffalo, he makes his directing debut this year with "Sympathy for Delicious," which stars its writer, Christopher Thornton, as a paralyzed club DJ drawn into the world of faith healing. Fellow indie superstar Philip Seymour Hoffman also moves behind the camera, directing himself (as a New York limo driver) in the working-class drama "Jack Goes Boating."

Other high-profile names in relatively low-wattage surroundings include James Gandolfini, Melissa Leo and Kristen Stewart as the damaged family in "Welcome to the Rileys"; Ryan Gosling and Michelle Williams as the tormented central couple in the long-gestating "Blue Valentine"; and — surely one of the festival's hottest tickets — Kristen Stewart and Dakota Fanning playing Joan Jett and Cherie Currie, bandleaders of "The Runaways."

Bill Murray and Robert Duvall head the cast of the winsome Southern fable, "Get Low," a possible sleeper hit to be, and former "ER" show runner John Wells directs a sterling group of guy's guys — Ben Affleck, Chris Cooper, Kevin Costner, Tommy Lee Jones — in the recession drama "The Company Men." But no actor embodies the diffuse and potentially beguiling spirit of Sundance 2010 better than Oscar laureate Adrien Brody, who appears to have thrown caution to the winds and decided he'll do what he damn well feels like. Brody plays a legendary tattooed-'n'-dreadlocked local pothead in the stoner comedy "High School" — which I'm pegging here and now as a Sundance breakout — and a brilliant, misguided scientist in Vincenzo Natali's genetic-engineering monster movie, "Splice." I so cannot wait.

I'll post Sundance updates to Film Salon as I can, and if you want even pithier news than that, you can follow my overcaffeinated, snowbound, half-conscious outbursts on Twitter.