When did we become such a nation of scaredy-cats? 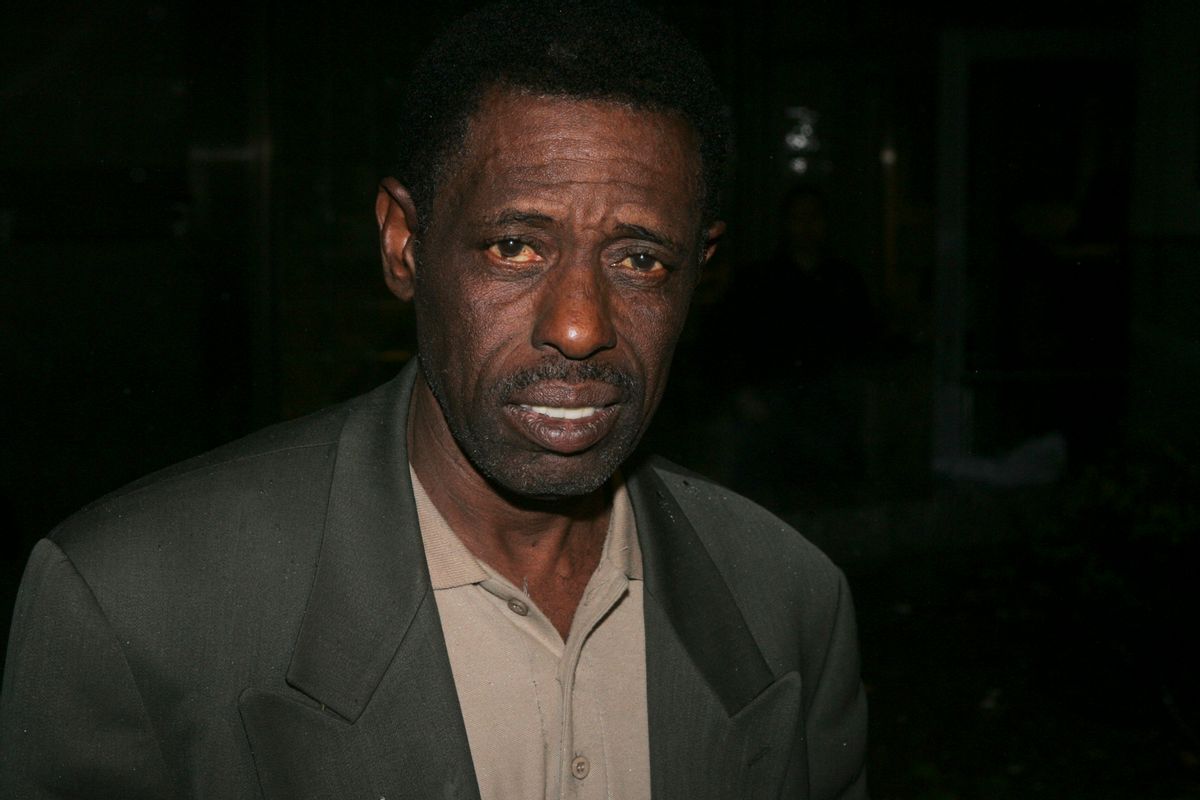 Jules Paul Bouloute leaves Queens Criminal Court in New York, Sunday, Jan. 17, 2010, after his arraignment on criminal trespass charge. He caused the evacuation of a terminal at John F. Kennedy International Airport on Saturday when he entered through an unauthorized door. (AP Photo/Robert Mecea) (Robert Mecea)
--

This country needs to get a grip. We need a slap in the face, a splash of cold water.

Which is what you'd assume. Sure, the exit was clearly marked, but it happens all the time, does it not? In office buildings, shopping malls, hospitals and airports, well-intended people become distracted and pass through restricted doorways. And you would think our airport security force would keep this in mind and react accordingly, and not with the assumption that every errant traveler is a terrorist poised for mass murder. To the contrary, why in the world would an attacker go around setting off alarms and drawing attention to himself?

Unfortunately, this is America 2010, and the response at JFK was neither rational nor surprising. All of Terminal 8 was evacuated for more than two hours. Police then swept through the building with dogs and SWAT teams (because, you see, a terrorist wouldn't quietly drop an explosive device into a trash barrel; he would first set off alarms, in order to...?). Before being allowed back in, thousands of travelers were forced to undergo rescreening at the Transportation Security Administration checkpoints, giving guards a chance to snag any butter knives or 4-ounce shampoo bottles they might have missed the first time. Inbound planes were stranded on the tarmac and departures were delayed for several hours.

Mind you, this was the third incident at New York airports in recent weeks in which transgressions resulted in chaos and evacuations.

Bouloute, who had just come from Haiti, of all places, was arraigned on charges of first-degree criminal tampering and third-degree criminal trespass. He faces up to seven years in prison. I can't imagine he'll actually be convicted, but the mere fact that we're going through the motions is disheartening and embarrassing enough.

But what shocks me the most is that throughout all the coverage of the incident, including numerous interviews with ticked-off passengers and somber-voiced officials, not once has anybody raised the point that maybe — just maybe — we overreacted. Everyone, instead, is eager to blame Bouloute.

"As a result of the defendant's actions, thousands of people were required to evacuate and to be rescreened by TSA, causing substantial delays in the airlines' schedules," District Attorney Richard Browne said in a statement.

No, I'm sorry, Mr. District Attorney, but that's not it. What caused the delays and what hassled so many travelers was not the defendant's actions, but our mindless and hysterical response to them.

The media and officials, in all possible gravity, keep describing the incident as a "security breach." Not to harp on semantics, but am I the only person who finds this silly? Granted I'm not privy to every detail, but let me go out on a limb here: It was an accident. A simple and minor accident. As Bouloute's attorney told reporters, "He just walked through the wrong door."

How could he have missed all the red signs and placards? Who knows, though bear in mind that Bouloute had come from Haiti, where three days earlier an earthquake had killed or injured hundreds of thousands of people, some of them, we have to presume, Bouloute's friends or family.

Let's click our heels together and enjoy a bit of time travel. True story: In 1996 a distracted individual opened a different restricted door at Kennedy airport, setting off an alarm and feeling like a fool for doing so. That individual was me, Patrick Smith. Those were my regional pilot days, and I was trying to find my way out to the bus stop from the rat maze that is Kennedy's Terminal 3. It was dark and I was exhausted and, well, pack me off to Gitmo, I pushed on the wrong door. This particular "security breach" didn't make the evening news, however. A guard came over, checked me out, and reset the bell.

What has become of us? Are we really in such a confused and panicked state that a person haplessly walking through the wrong door can disrupt air travel nationwide, resulting in mass evacuations and long delays? "The terrorists have won" is one of those waggish catch-alls that normally annoy me, but all too often it seems that way. Our reactionary, self-defeating behavior has put much at stake — our time, our tax dollars and our liberties.

And where is American Airlines in all of this? It has refused to comment, citing the "ongoing investigation." Par for the course. When was the last time you heard a carrier complain publicly about the misguided policies of airport security?

And that's a shame. I realize that airlines are in a very tough position. They face extreme liability issues and cannot be seen as lobbying against security, even if what they're complaining about is justified. And the airlines, remember, caught an awful lot of flak, most of it undeserved, in the aftermath of Sept. 11. But at some point they need to stand up. Needless security woes make their customers angry and are one of the prime reasons that many people choose not to fly. At times the industry's silence and squeamishness suggest a business model of masochistic capitulation.

In Europe carriers have been feistier. After the foiled liquid bomb plot in London in 2006, British Airways threatened to sue the British Airports Authority over a draconian carry-on ban that resulted in scores of cancellations and massive delays. A group of airlines led by budget carrier Ryanair prepared a half-billion-dollar lawsuit against the British government, hoping the threat of legal action would inspire ministers to rescind some of the luggage restrictions, described by Ryanair as "illogical and unworkable."

Eventually the rules were relaxed.

Never mind screening delays, how about the cost of unscheduled diversions? Ever since 9/11, skittish fliers have touched off a plague of in-flight false alarms. A passenger looks at somebody the wrong way, and the next thing you know fighter jets are scrambled and you're headed to Newfoundland. Aircraft are evacuated while canine units inspect hundreds of suitcases. For an airline the trickle-down price of such disruptions — fuel costs, crew costs, passenger misconnects and downstream delays — can run well into the hundreds of thousands of dollars.

Maybe the most appalling diversion story is the one from 2004 involving a United Airlines 747 bound from Sydney, Australia, to Los Angeles. The plane jettisoned thousands of gallons of fuel over the Pacific and returned to Australia because a discarded airsickness bag was discovered with the letters "BOB" scrawled across it.

So, you ask, what is so nefarious about the letters "BOB," from the perspective of a crew member who might find such a message? Don't ask me, I'm just an airline pilot. "Baleful Old Bagels"? "Bob O'Brien"? "Bauxite on Board"? I have no idea. United, though, for reasons that defy any precedent or explanation, took the letters to mean bomb on board, and — I am not making this up — went all the way back to Sydney.

As we know, terrorists are apt to advertise the imminent detonation of an explosive device ahead of time by means of a cryptic acronym scrawled on a barf bag.

And so on. How about the time in 2002 when military fighters were scrambled because — get ready now — a group of karaoke singers were seen chatting excitedly and pointing at the Manhattan skyline from the window of an Air India 747. This was just one of almost 3,000 military intercepts of civilian jetliners over North America since 2001. I mean ... I just ... It's...

Calming down will not make us "less safe," as security zealots are wont to argue. Quite the opposite, it would free up time and resources, allowing us to focus on more credible and potent problems.

Meanwhile, somewhat related to all of this, late last week a U.S. missile strike in Pakistan killed a man named Jamal Saeed Abdul Rahim. A former member of the Abu Nidal terror group, Rahim had been one of the FBI's most wanted fugitives, sought for his role in the hijacking of Pan Am Flight 73 in September 1986.

Flight 73 had stopped in Karachi when a team of hijackers stormed the Boeing 747. Pakistani security forces rushed aboard in a rescue attempt, and the terrorists began shooting and lobbing grenades. Twenty-two people were killed and more than a hundred injured. Rahim and three accomplices were convicted by Pakistani authorities, but they were eventually released.

The Abu Nidal group, today long forgotten, was busy in the mid-1980s. A year before Karachi they killed 20 people in a pair of coordinated ticket-counter assaults at the airports in Vienna and Rome.

Also in 1986 was the bombing of TWA Flight 840. As the 727 was on approach into Athens, a bomb went off in the cabin, killing four people.

In fact, over the five-year span between 1985 and 1989 we can count at least six high-profile terrorist attacks against commercial planes or airports. In addition to those above were the horrific bombings of Pan Am 103 and UTA 772, the bombing of an Air India 747 over the North Atlantic that killed 329 people, and the saga of TWA Flight 847.

Flight 847, headed from Athens to Rome, was hijacked by Shiite militiamen armed with grenades and pistols. The 727 then embarked on a remarkable 17-day odyssey to Lebanon, Algeria, back to Lebanon, and then back to Algeria. At one point passengers were removed, split into groups and held captive in downtown Beirut. The photograph of TWA Capt. John Testrake, his head out the cockpit window, collared by a gun-wielding terrorist, was broadcast worldwide and became an unforgettable icon of the siege.

I say "unforgettable," but that's just the thing. How many Americans remember Flight 847? How many remember the Karachi murders? It's astonishing how short our memories are. And partly because they're so short, we are easily frightened and manipulated.

Here in this proclaimed new "age of terrorism," we act as if the clock began ticking on Sept. 11, 2001. In truth we've been dealing with this stuff for decades. Not only in the 1980s, but throughout the '60s and '70s as well. Acts of piracy and sabotage are far fewer today.

Imagine the Karachi attack happening tomorrow. Imagine TWA 847 happening tomorrow. Imagine six successful terror attacks against commercial aviation in a five-year span. The airline industry would be paralyzed, the populace frozen in abject fear. It would be a catastrophe of epic proportion — of wall-to-wall coverage and, dare I suggest, the summary surrender of important civil liberties.

What is it about us, as a nation, that has made us so unable to remember, and unable to cope?

Next time in "Ask the Pilot": Flying in Haiti