Like the clumsy "Star Wars" prequel, Syfy's "Battlestar" rewind is a pale shadow of the original (remade) series 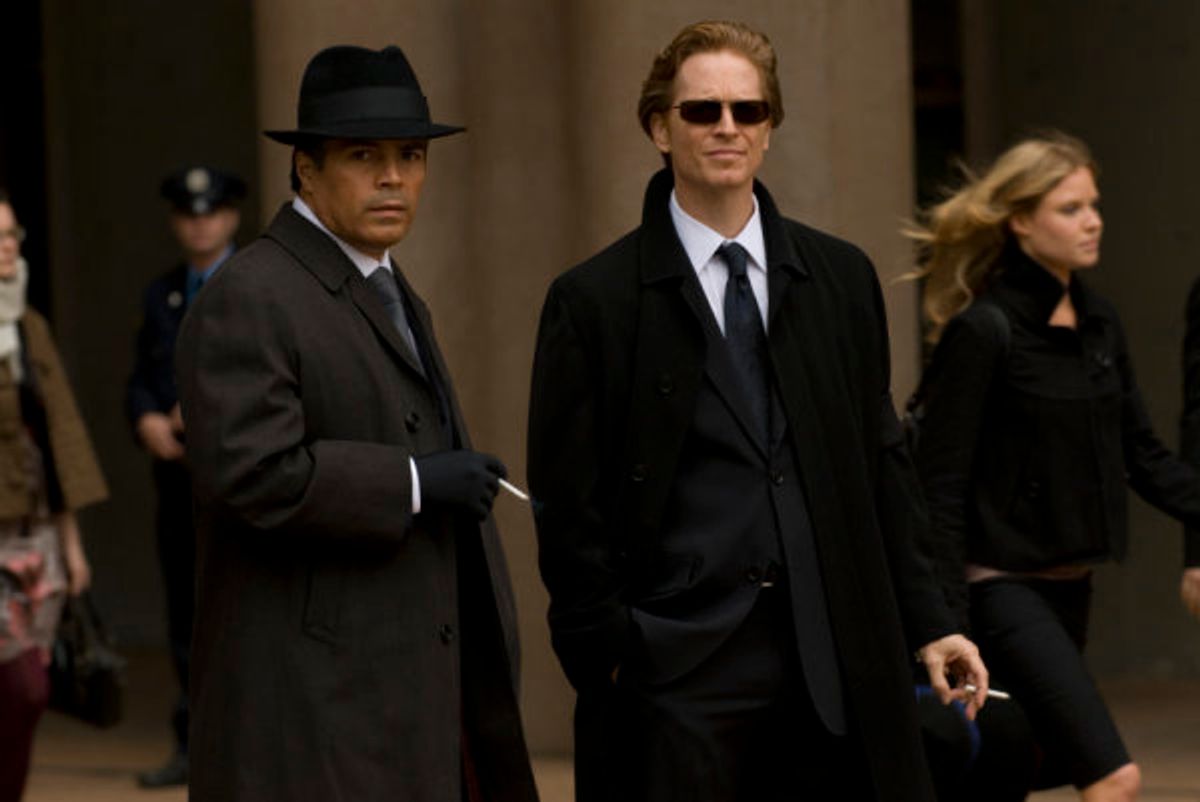 Being a young "Star Wars" fan in the '70s was awesome, but being an old "Star Wars" fan in the new millennium flatly sucks. Nothing will make you queasier than hearing a young kid refer to "The Empire Strikes Back" simply as "Number Five,"  as if three stunningly bad prequels are even fit to touch the flowing Jedi hem of the original trilogy. Working backward only made the dialogue and plot points of the prequels feel clunkier and more on-the-nose than they would have otherwise: Characters marched around, remarking on Anakin Skywalker's fierce temper and relentless insecurity, over and over again. "We get it, we get it, he's going to be seduced by the Dark Side!" we growled at the movie screen, begging George Lucas to stop showing us his character notes. How did a luminous being like Lucas churn out such crude matter?

Likewise "Caprica," SyFy's much-anticipated "Battlestar Galactica" prequel, suffers from the awkward starting block of presenting "the burgeoning technology of artificial intelligence and robotics that will eventually lead to the creation of the Cylons," but it's also charged with exploring the same looming questions that "Battlestar" did over the course of its run. This means that, not only does every plot point of "Caprica" feel like a big, obvious explanation for the far more compelling original ("So that's how the Cylons were created to think for themselves!" "Ah, that's why the Cylons are monotheistic!"), but the whole thing is stuffed with the worst sorts of flashy but skin-deep characters. Here's a rebellious teenager with delusions of grandeur, an arrogant, heartbroken father turning to technology to cure his grief, a working-class girl hungering for some way to belong, a nurturing nun who's also a drug addict.

Feeling dizzy yet? Sure, as with the "Star Wars" prequel, there are plenty of provocative scenes to pull you in, whether it's a Cylon prototype blowing up smaller robots with merciless efficiency (I don't recall the Centurions from "Battlestar" being such good shots) or two fathers, Daniel Graystone and Joseph Adama, reunited (in a virtual world) with their poor, dead daughters. We know by now that creators Ronald D. Moore and David Eick are skillful at translating their groovy story ideas into compelling, emotionally wrenching snapshots of anguish or ominous portrayals of arrogance and bluster among the ruling elite. We also know that they'll weave in heavy-handed commentary on class, race, gender, religion, politics and anything else that might lend this soapy robot circus more intellectual flair and street cred.

On "Battlestar Galactica" these elements usually felt organic, like another smart layer to complement an already full plate of suspense, action and the emotional reverberations and post-traumatic shock befitting the wake of a nuclear holocaust. But on "Caprica," hearing the same echoes of meaning sort of feels like seeing Yoda fly: It's cool and everything, but it's also out of step with our understanding of him. Basically, we want Yoda bickering with R2D2 on swampy Dagoba, not leaping through the air or playing preschool teacher to a bunch of saucer-eyed "younglings."

And just as we knew the damn younglings were going to get slaughtered the second they ambled adorably into the picture, we recognize early on that Zoe (Alessandra Torresani), with her big, pretty Zooey Deschanel look-alike face and her genius brain and her girly, foot-stomping alienation, is going to use her talents for evil rather than good. She hangs out in a virtual club where people virtually slaughter each other for fun and entertainment, after all. Or are we just prejudiced against the sensationalistic hobbies of this younger generation?

See how everything in "Caprica" reverberates with the most irritatingly primitive social commentary? Maybe this kind of button-pushing -- Terrorist teens! Sexy murder/dance club! Criminal underworlds! Thoughtful robots! -- was present in the "Battlestar" series, and we were just too distracted by the gigantic spaceships and look-alike robot spies to mind. Maybe it was the weight of the nuclear holocaust, looming at the edges of every frame, that legitimized the soapiness of "Battlestar." All I know is, now that we're on Caprica, "58 years before the fall," i.e., the nuclear attack by the Cylons, the story feels like the worst sort of retread: "Caprica" has few of the charms of the original series, and because it's a prequel, it doesn't even further the story. We're forced to rewind to a time that's less weighty and less intriguing, yet everyone is walking around talking to each other in the same over-the-top heavy tones that made sense within the claustrophobic confines of "Galactica" but just feel unnecessarily melodramatic here. Not only does every line feel too obvious, but it's tripped up by clumsy back story. It's as if we're being treated to some bullet-pointed character profile where key traits are highlighted, circled and underlined three times.

"You have no idea what it means to build something, or to work hard for anything! It's all just been handed to you, Zoe!" says Zoe's mom (Polly Walker).

"We come from a long, proud line of Tauron peasants!" Joseph Adama (Esai Morales) tells his son (Sina Najafi). "You're named after your grandfather, I ever tell you that? William. He was killed after the Tauron uprising."

"Blood for blood!" Sam (Sasha Roiz) says to his brother, Joseph. "It's the Tauron way!"

"You mean only the gods have power over death? Well, I reject that notion!" says Daniel Graystone (Eric Stoltz), Zoe's father and the head of the company that's working on creating the Cylons.

"When did you ever listen? You and Mom, you knew it all!" Zoe's avatar says to Daniel. "Your arrogance was killing your daughter!"

It was easy to take issue with those who called "Battlestar" foolish: There was so much suspense and action and political intrigue in the mix that a few dippy scenes where Starbuck and Lee made googoo eyes at each other or Six and Baltar debated the meaning of life for the 50th time were tolerable. Somehow the same clunky philosophizing and heartfelt confessions fall flat in "Caprica." Although the second and third episodes of the prequel are a little more intriguing and less gummed up with melodrama than the pilot, the overall picture is a world apart from the dynamism and intensity of "Battlestar."

When grieving daddies first try to reunite virtually with their dead daughters, then become enemies, when monotheist nuns hatch eeevil plans and Cylons all but scribble in their diaries about their no-good very-bad days, it's hard not to wish that we could pick up in the hopelessly cheesy spot we left "Battlestar" instead, with Bill Adama making a happy little Cro-Magnon family on the planet Earth. As Daniel Graystone and Joseph Adama know all too well, sometimes anything is better than trying to recapture the past.

Battlestar Galactica Caprica I Like To Watch Star Wars Television