Heidi Montag: The monster we created

She's a hot mess in a triple-D cup, a cosmetically enhanced nightmare -- and a celebrity for our time 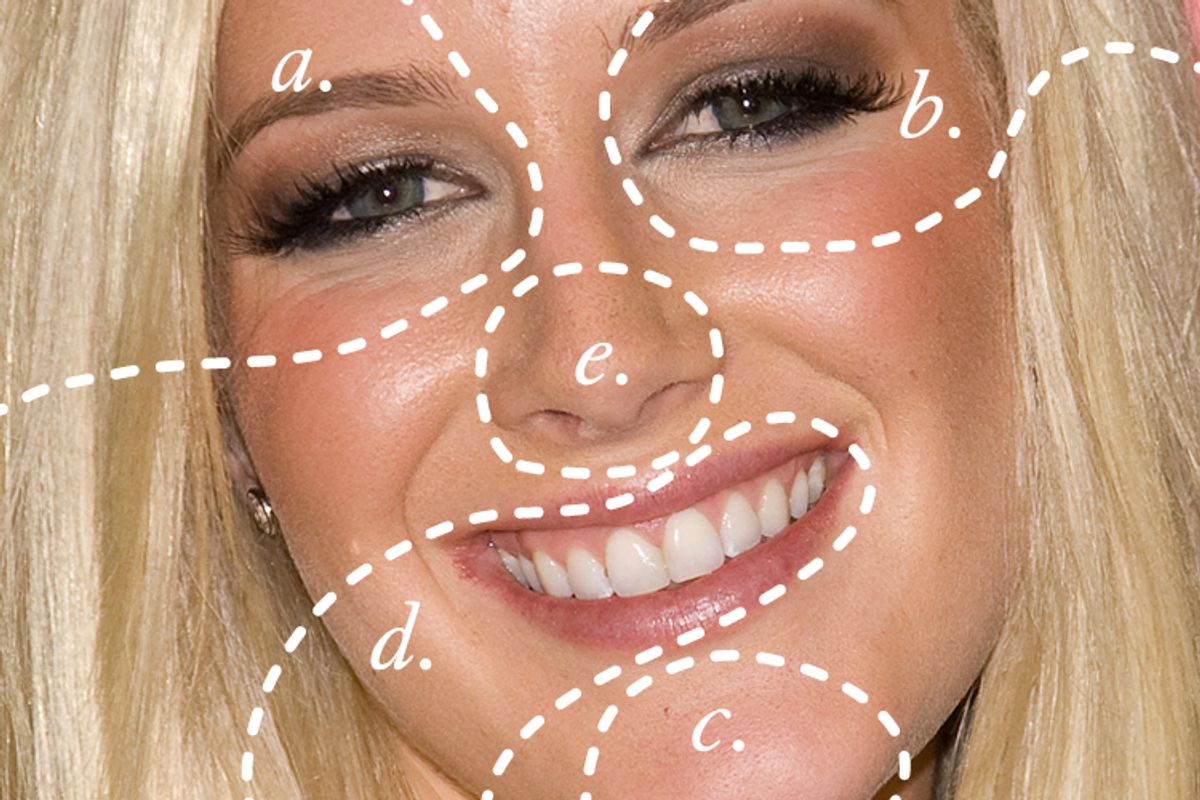 Though America will never lack for celebrities who parlay our loathing of them into their bread and butter, no one seems to bask better in the spotlight of distaste these days than Heidi Montag.

The spoiled, bitchy and bottomlessly vapid MTV reality star  with the tragically self-promoting husband, Heidi Montag is also a monster of our own creation:  a woman who seems to exist solely to make the rest of us feel better about our relative depth of character -- and who, apparently, thrives on the negative attention.

Earlier this month, she released an unsurprisingly lackluster album with the poetically appropriate name "Superficial" and started filming a new season of her heavily scripted series "The Hills," all to the yawns of millions. Perhaps fearing that the dawn of a new decade might signal an end to our fascination with watching shallow people do questionable things, the 23-year-old then took to the cover of People magazine last week to show off her multiple cosmetic procedures -- including a horrifying 10 in one day: a brow minilift, nose-job revision, fat injections in cheeks and lips, chin reduction, neck liposuction, ear pinning, breast augmentation revision, liposuction, buttocks augmentation and a little Botox thrown in. In a grand gesture of stating the obvious, she confessed that the reason she put herself through enough work to look like she'd gone through a car window was that she's "beyond obsessed" with self-improvement. Then, just in case that didn't get our attention, the sculpted,  pneumatically hootered blonde appeared on "Good Morning America" to tell us, in her Tin-Man-before-the oil-can-stiff-faced way, that "My main message is that 'beauty is really within.'"

Congratulations, Heidi, you clueless, narcissistic, Playboy-posing, Jesus-invoking coauthor of a book about being famous for being famous plastic surgery junkie! You're everything wrong with everything in the world! You win!

For her candor – and rather shameless fame-grubbing – Montag has been near universally vilified. After her story appeared on People, the commenters  eagerly panned her new look with unkind comparisons to Joan Rivers. The sentiments ran along similar lines at ABC after the "GMA" appearance, where the adjectives "talking corpse" and "plastic zombie" were bandied about.  (Unafraid as ever to be completely tone deaf, the impressively endowed Meghan McCain used her Daily Beast column this week to decry the "boob police" who allegedly "hailed" and "celebrated" Montag for "showing off her new purchases.")  Dr. Drew Pinsky, no stranger to publicity-seeking himself, meanwhile quickly diagnosed Montag as a "female cross dresser" who "clearly has some significant emotional issues." In short, lady, you're a hot mess in a triple-D cup.

But there's something almost masochistically unsatisfying about hating on Heidi. Maybe it's just so damn easy, it feels like it's giving the fame monster exactly what she wants.  That, of course, has been the perverse quid pro quo pleasure of reality television all along -- its stars get the illusion of true fame, and viewers get the effortless joy of feeling superior to them for their craven pursuit of it.

Appearing on "Access Hollywood" a few days ago, Montag said, "I wasn't happy with the way I looked …  On blogs and after shows, people would circle my chin and say I had Jay Leno Chin. " She's right, they did. They also reviled her as "ugly"  every step of the way, too.

So what did she do about it? Did she go quietly to live on a farm or help the homeless or learn a useful trade? No, she fixed it by spending enough money to bail out the American auto industry. And then we criticized her for that too. Gotcha! You want so badly to be famous? OK, but just don't get old  or gain weight or go outside looking like an un-Photoshopped version of yourself, bitch! And if you try to, as Heidi put it, "upgrade," we will despise you for being a big fake, judging you from exactly the same glass house from which we called you ugly. Well played, humanity.

Heidi Montag is a woman whose most evident skill is getting attention, one who has gleaned that if she needs to turn herself into a blow-up doll and open herself up to some class-A excoriation to get it, she's still game. The most apt word I can come up with regarding that is just "sad." Sad for someone so desperately eager to "be the best me, in and out," sad for a celebrity cottage industry so equally eager to tear individuals down. Because as long as there are people who measure their own self-regard in relation to their disdain for others, Heidi Montag will never be out of work.  And there's something awful enough about watching an enviably pretty young woman surgically transform into a matronly Barbie doll without piling on. That's why I can't be bothered hating her. I couldn’t do a better job than a whole lot of people -- including, it seems, Heidi Montag herself --  are already doing for her.