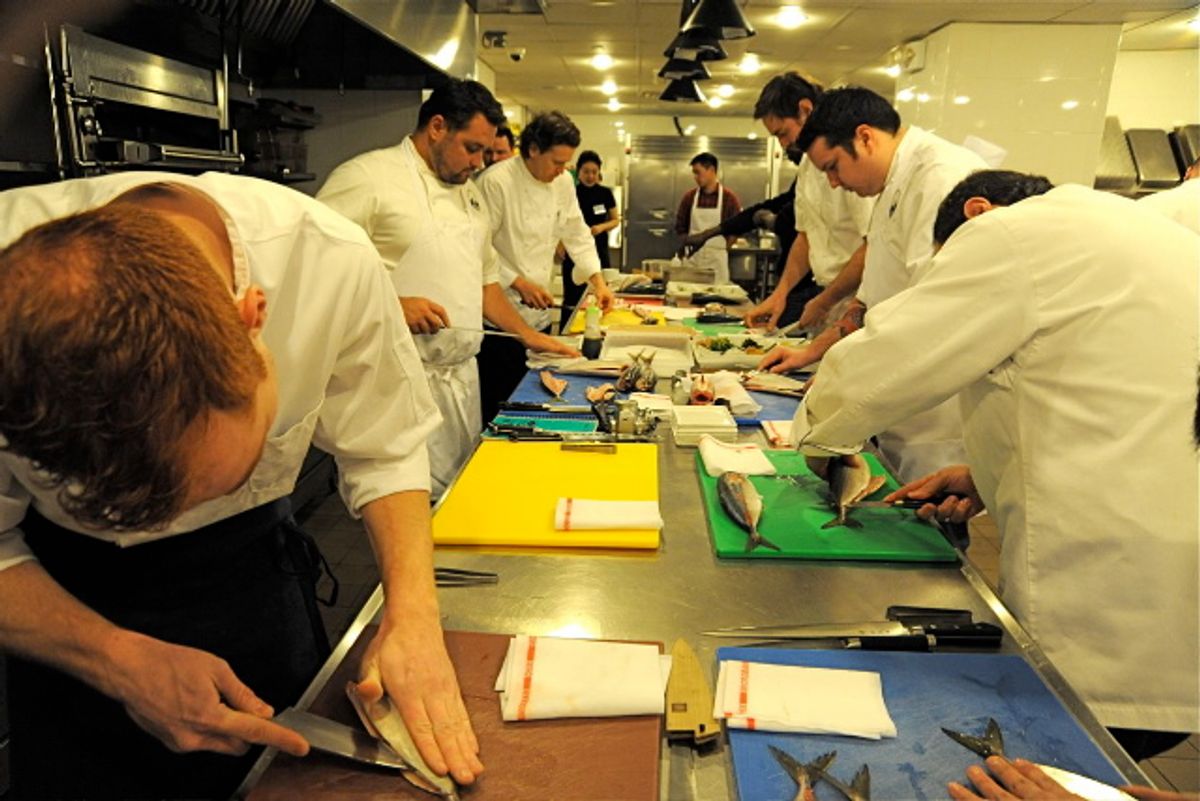 In the interest of cultural and culinary exchange, the Gohan Society offers professional chefs -- including ones from Daniel and wd-50 -- the opportunity to learn the art of Japanese fish mastery, taught by chef Toshio Suzuki of Sushi Zen restaurant. This is the first of a series of reports and reflections from that course.

As the subway car rumbled toward home late one night, I saw a man doing something unusual, which is saying a lot considering what happens late at night on subway cars. He stroked the air with two fingers of his right hand and brushed them, quickly, on his left palm, next to what looked like a big white pill. He closed his fist, pressing his fingers into it, the veins bulging in his thin, taut forearms showing a firm, controlled pressure. He wore a certain look of concentration, opened his fist, and repeated all this again and again.

His intense focus warmed into a tooth-filled smile. "I am training," he said. "Sushi."

I looked at his hand; the pill was actually a towel, rolled up to the size of the rice in his sushi. He was practicing dabbing wasabi into his hand, rolling the rice forward to pick it up, squeezing it with the exact amount of force for it to hold together in a neat bed for the fish.

Daisuke was his name, recently arrived from Kyoto, inspired to explore the West after a stint as the chef of the Japanese embassy in Belgium, where he prepared the traditional high-cuisine called kaiseki. He is an accomplished chef. So why did he have to practice squeezing rice on his way home?

"In America, people think all Japanese food is sushi," he said. "So I must learn sushi."

But something else occurred to me, about sushi and Japanese cuisine in general. A friend once told me about meeting a team of Japanese master chefs. Chief among them, the oldest and most respected, most deferred to, was the man who had perfected cooking rice. Seventy years of experience behind him, and his most revered accomplishment was rice. This is a cuisine, I realized, of finding the complexities in simple things, of perfecting the humble. It's a cuisine of contemplation, deliberateness and concentration, a cuisine that asks you as a cook and as a diner to understand and to appreciate the difference between rice that is cooked well and rice that is cooked perfectly. And so Daisuke felt compelled to practice and hopefully master the art of squeezing rice for sushi.

And, as it happens, Daisuke had just started working at the restaurant Sushi Zen, whose owner, Toshio Suzuki, is renowned not just as a top-flight sushi chef, but as an ambassador for traditional Japanese culinary arts. Arranged by the Gohan Society, Chef Suzuki teaches an eight-session course for professional chefs on the master's way with fish: how to clean and handle fish to be served raw or cooked; how to read their anatomies and how to cut them to best effect; how to bring out their flavors.

Attending these classes, I hope to learn -- and to share with you -- some lessons applicable to curious cooks. Probably very little will be done perfectly in these classes, even by the four-star chefs sitting beside me. But that's OK; when you're not a master yet, you don't have to let the perfect be the enemy of the good. And today's two lessons, on mackerel and what's probably going to be your new favorite, jackfish, are most certainly very good.