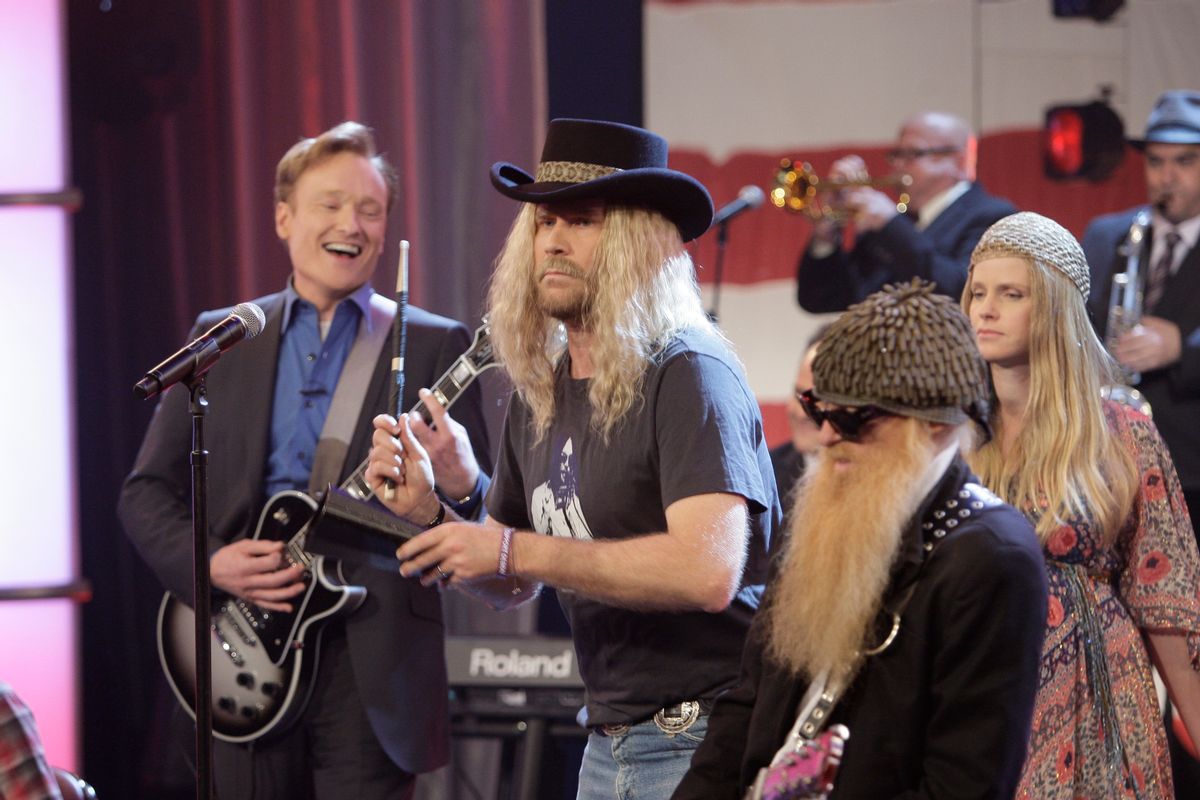 "We've had a lot of fun being here," Conan O'Brien said on his last show Friday night. "But like everything in life, the fun has to come to end …  a decade too early."

And so, this was how it had to be. Not with a silver-haired O'Brien wistfully handing over the reins to a hard-working younger comic at the apex of a sentimental clip show, but instead, a mere seven months into his gig hosting one of the most venerable institutions in television. As Conan told the audience, "We have exactly one hour to steal every single item in this studio. It's ours, take it."

He had been soaking NBC in kerosene for the last two weeks -- now, on his final night, the question was whether he'd actually throw the match. And yes, believe it or not, this whole excruciating debacle has only been unfolding for 16 days.

Striding onstage to a standing ovation and thunderous applause, O'Brien turned to his faithful sidekick Andy Richter just as Richter mouthed, "I love you." He then introduced a montage of moments from the past few months, set to the strains of Cheap Trick's "Surrender" and ending with the poignant words "To be continued…"

But it was clear right from the get-go that O'Brien did not intend to sully his sendoff with any shenanigans involving marching bands and 10,000 marbles. It was, all in all, a sweetly subdued ending to half a month of scorched earth. The barely contained fury that has fueled the past few shows -- and made them full of singularly Tivo-worthy "Oh no he didn't!"  moments -- had melted away, in part perhaps of the alleged non-disparagement clause  in O'Brien's hefty buyout, but also, perhaps, a product of some late-stage Elisabeth Kübler-Ross acceptance. At times, O'Brien looked positively rapturous, awed at the blessing of having won so much good will.

Even without histrionics, the show was memorable. O'Brien welcomed Steve Carrell, who repeated George Clooney's hollow "Up in the Air " exit interview speech about how "Everyone who ever built an empire sat where you do now" and then shredded Conan's NBC ID badge. Then Tom Hanks, sporting movie star-issue sunglasses and brandishing a highball glass full of what he referred to as "Daddy's little reward," told Conan, "In our house you'll always be the host of 'The Tonight Show,'" before adding, "so if you could get there by about 10:45?" And Neil Young, fittingly, touchingly, played his classic, "Long May You Run."

Sure, on the same night that all three networks managed to get their shit together to jointly air the Hope for Haiti concert, it may seem trite and silly to grieve for a millionaire and his well-compensated team prematurely ending their tenure. Between his already lucrative contract and his spectacular golden parachute, O'Brien can, if he so chooses, now buy himself an island and spend the remainder of his days in muumuued, Brandoesque languor. You know, some people never even get to host "The Tonight Show" at all!

But here’s why it matters. Because it’s not just about some dumb TV show. It’s not just poop jokes and self-pleasuring members of the ursine family. In the show's waning moments, O'Brien sat at his desk and told the audience that, "Tonight I'm allowed to say whatever I want." And what he said, after two weeks of sticking it to the man, was this: "I've worked with NBC for over 20 years. Yes, we have our differences right now, yes we're going our separate ways, but this company has been my home for most of my adult life and I'm enormously proud of the work we’ve done together and I want to thank NBC for making it all possible." With the eloquence of the writer he is, O'Brien continued, "Walking away from 'The Tonight Show' is the hardest thing I have ever had to do … Despite this sense of loss, I really feel this should be a happy moment … This massive outpouring of support and passion from so many people has been overwhelming for me … Here's what all of you have done: You made a sad situation joyous and inspirational. I can never thank you enough."

It was humble and classy and true – because Conan's nightly exercise in lambasting the "morons" at NBC has been only half the story. The other half of it has been that groundswell of adoration for the guy, that embracing of everything weird and subversive he represents – the triumph of not growing up, of not playing it safe, of reckless, bratty fun in the face of conventionality and disappointment. He could have been Jay's bitch and slunk off to 12:05am (and if I were on his staff, I can't honestly say how thrilled I'd be that he didn't), but he chose to do the nutty thing, the uncompromising one. He ended his show the same way he began it, as a cheerful, loose-limbed goofus who can grasp the absurdity in the high-stakes world of network television.

So his ending wasn't one last raging, desk-topping tantrum, and it wasn't maudlin either. It was instead funny and bittersweet. Welcoming a blonde, longhaired Will Ferrell (backed by Beck himself) to the stage, O'Brien slung on a guitar while Ferrell wailed Lynyrd Skynyrd's "Freebird."

Did Ferrell rock out with his cowbell out? Oh yeah, he did. And Conan, playing away on guitar, was smiling. I was, too, through the tears. Because it was a silly and genuine finale for one of the most inspired, ridiculous shows ever to air on a network, and the end of a strange, lovely moment in time when the weirdoes banded together behind their late-night king to say, enough with mediocrity. Enough with DVR-proof bullshit. Give us talent and inspiration and the unpredictable.

Maybe NBC -- which, as if to say, "You think you’re disgusted with us now, folks?," aired a "Dateline" episode on the most "amazing" crimes caught on tape in Friday's hallowed 10 p.m. slot -- will consider that parting bit of wisdom as a new programming strategy. Because what's unfolded over these 16 days has been one of the most authentically amazing, least cynical things ever to happen to a show and its audience. "The Tonight Show with Conan O'Brien" is over forever. But Team Coco lives on. To be continued.