This Week in Crazy: Clarence Thomas 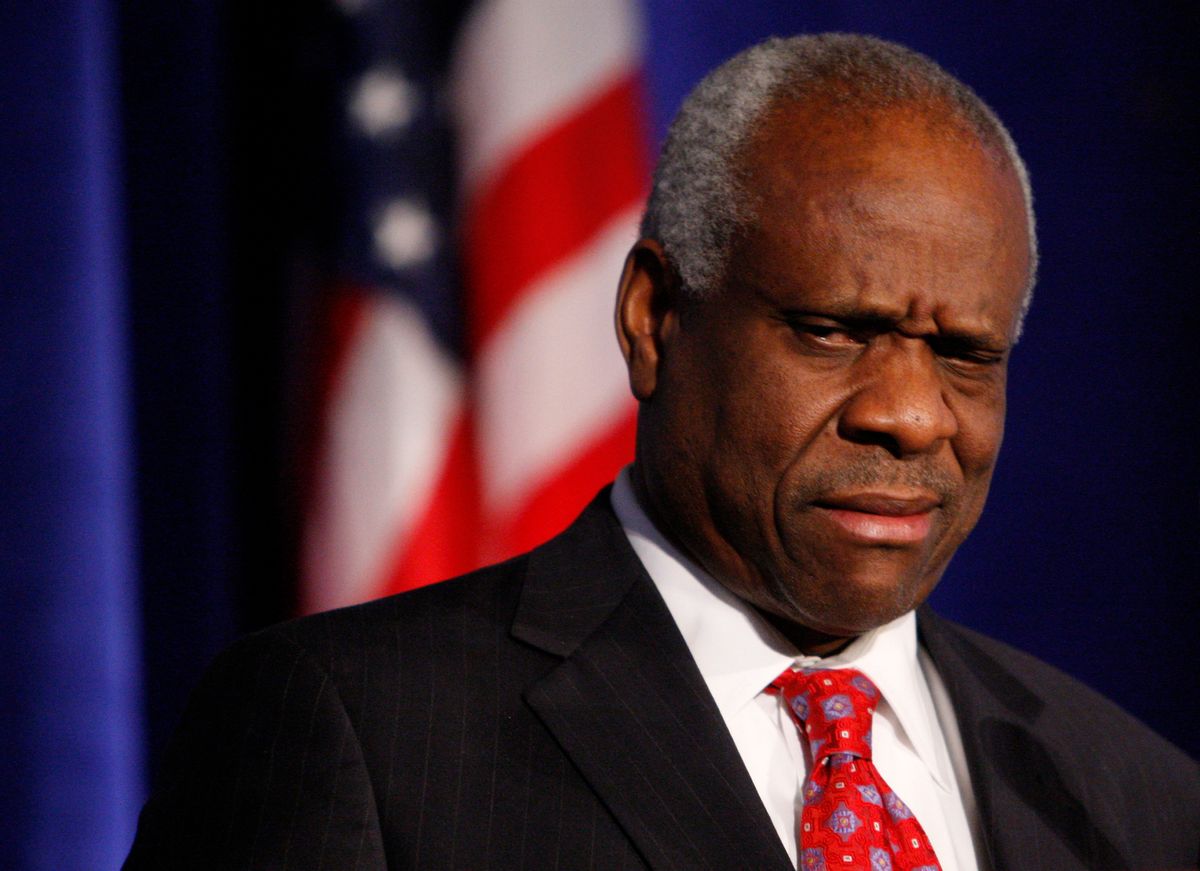 In his remarkably undistinguished 20-year stint as a Supreme Court justice, Clarence Thomas has rarely called attention to himself for original jurisprudential thinking. But if Thomas had had his way with Citizens United v. the Federal Election Commission, in which the court decided this week to remove critically important limits on campaign financing, an already horrible decision would have been made far, far worse. Crazy worse.

Thomas went along with the majority in agreeing that corporations and unions can once more be permitted to spend freely on political issues, thus driving a stake through the heart of the democratic process in the United States. But he dissented in part, because he didn't think the ruling went far enough. Specifically, he argued that the court was wrong to continue requiring that the sponsors of political advertising disclose who paid for them.

That's right. Thomas came out against the principle of transparency, and for the right of corporations to spend millions of dollars to influence public policy without having to tell anyone what they were up to. It's hard to imagine a less democratic stance.

Thomas did have his reasons, however. He blamed the gays. In the heated war over Proposition 8 in California, he wrote, any individual who contributed as little as $100 in favor of the ban on same-sex marriage was required to disclose his or her name and address to the public, and thus opened themselves up to harassment.

Some opponents of Proposition 8 compiled this information and created Web sites with maps showing the locations of homes or businesses of Proposition 8 supporters. Many supporters (or their customers) suffered property damage, or threats of physical violence or death, as a result. ...

I cannot endorse a view of the First Amendment that subjects citizens of this Nation to death threats, ruined careers, damaged or defaced property, or pre-emptive and threatening warning letters as the price for engaging in "core political speech, the 'primary object of First Amendment protection.'"

To be fair, writing at the Sunlight Foundation blog, Daniel Schuman notes that there is some precedent for challenging disclosure by individuals when there is the potential for harassment.

It stems from attempts by the KKK to get membership lists of NAACP contributors during the civil rights era so that the Klan could attack the organization's supporters. With firebombs. But that's a far cry from disclosing corporate donors.... Also, unlike in the civil rights era, criminal behavior such as that engaged in by the Klan will be prosecuted by the state, and likely can be deterred.

To recap: In order to protect Californian opponents of gay marriage from harassment, which is best handled by legal prosecution, Thomas wanted to let corporations spend as much as they want on influencing public policy without ever having to identify themselves. I'll outsource the kicker to Adam Bonin, writing at DailyKos.

Too often, Justice Thomas gets accused of being an unthinking automatic second vote for whatever Justice Scalia says. Untrue. He's his own unique sphere of wrongness, and not even Scalia, Alito, Kennedy or the Chief Justice were willing to follow him on this one.

How The World Works This Week In Crazy