In October, 2008, the ACLU issued a report outlining the policies needed to restore civil liberties and America's constitutional framework in the wake of the Bush assault, entitled "Actions for Restoring America."  On the one-year anniversary of Obama's inauguration as President, the ACLU has issued a new report -- pointedly and revealingly entitled "America Unrestored" -- which details Obama's record in these areas.  Although there have been a few isolated bright spots (the DOJ's intensified domestic enforcement of civil rights laws), Obama's overall civil liberties record has been extremely disappointing, and this report from the ACLU (with which I consult) comprehensively documents the failures.

My guest today on Salon Radio to discuss the report is its Executive Director, Anthony Romero.  I also discuss with Romero the Citizens United case and the ACLU's serious constitutional concerns about the type of political speech restrictions which the Supreme Court just struck down.  Romero explains the substantial constraints imposed by such laws on the ability of non-profit incorporated advocacy groups (such as the ACLU) to express views on core political matters.

We recorded this discussion prior to the administration's announcement on Thursday that 50 Guantanamo detainees have been marked for indefinite detention, which obviously makes Obama's record that much worse.  Along those lines, consider the claim (once made by Bush defenders and now by some Obama supporters) that indefinite detentions are justified because these are "enemy combatants" picked up on a "battlefield."  The ACLU has assembled an interactive map showing where Guantanamo detainees were actually picked up (from over 50 different countries, many from their homes or off the street), and it underscores how the U.S. Government -- both the prior administration and the current one -- has manipulatively declared the entire world to be one big "battlefield": 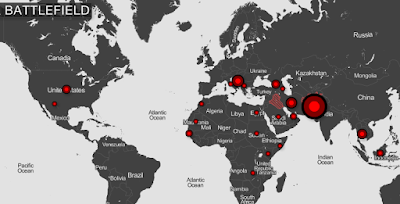 A "battlefield" with no geographical limits is as Orwellian as a "war" with no possible end, and it illustrates how radical and distorted is the claim that these detainees can be held forever with no charges of any kind because they are just like "prisoners of war" of the past.  The interactive map can be seen here, and new material highlighting the profound injustice of our detention policies -- including video interviews with released Guantanamo detainees -- can be seen here.

The discussion is roughly 20 minutes in length and can be heard by clicking PLAY on the recorder below. A transcript is here.