"Damages": Return of the dragon lady

In Season 3 of FX's rich, complex thriller, enigmatic villainess Patty Hewes is more unpredictable than ever 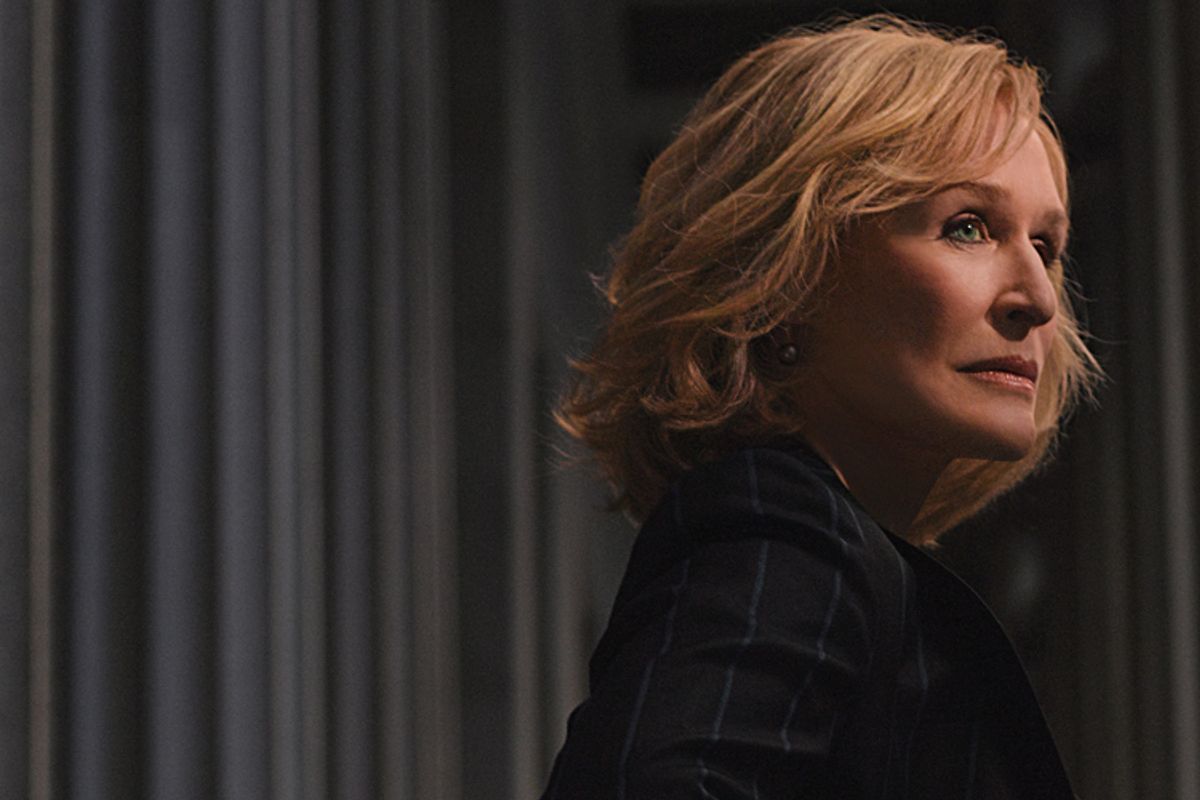 The third season of FX's "Damages" opens like a love story: Here's Patty Hewes (Glenn Close), smiling and laughing and charming a table full of people at a fancy restaurant as swooning, romantic music plays. Finally Patty gets up, and a strange man approaches her.

"I've been sitting at that table all night hoping to get you alone," the man says to Patty.

Patty assumes that they've met before and she's forgotten his name. ("Oh, of course! Julian. And remind me what you do?") Julian quickly hints that they haven't met, but his intentions still aren't clear. "Must be exhausting, wearing that mask," he says, "always having to play the role of Patty Hewes."

"It's not a mask, what you see is what you get," Patty says lightly.

Julian isn't convinced, but we still don't understand what he wants from her. What is he trying to pull, anyway? Why is he acting like he has her number?

And so, two minutes into a new season of "Damages" (premieres 10 p.m. Monday, Jan. 25, on FX), things are already getting creepy, and we can't look away. And that's before we find out about Patty's current case, prosecuting Louis Tobin, a Bernie Madoff-type financier who pulled off the biggest Ponzi scheme in history, that's before we see that Ellen (Rose Byrne) has left Hewes & Associates to work for the city prosecutor's office, that's before we witness a mysterious accident, meet a strange homeless man with secrets, and discover a dead body in a dumpster. Somehow, the writers of "Damages" take a crude little whodunit and weave it into a masterpiece of suspense and provocation. Somehow, by simply presenting a volley of edgy, brief scenes and odd little clues, they pull us in: Who is this Julian? What does he have on Patty? Why is Patty messing with Ellen? Where is Tobin's money stashed?

Is my wiring really so easily jumped? The mind reels. Why in the world do I care?

It would be easy enough to reduce "Damages" to the status of a pulpy page-turner. After all, it's all plot, right? Start with a story that we're already invested in (Bernie Madoff) but that's still shrouded in mystery even now that Madoff is doing time, throw in some high stakes for everyone involved, toss in a mystery man and a murder, and we're sold.

"Damages" could be far worse and still have an audience, as evidenced by the glut of lackluster whodunits on the air. Despite appearances, though, this show transcends the base level of twisty procedurals with one thing: Patty Hewes. Like Tony Soprano, Vic Mackey or Al Swearengen, Patty Hewes is that formidable villainess that makes the whole crazy mess sing. "Oh sure, she hisses at people. How compelling," you're thinking, and who would blame you? The world tends to encounter the nasty, powerful female character as a stroke of genius even when her evil is limited to a few cutting words and a willingness to slash someone across the face with her pointy red nails.

But Patty Hewes is different. She's a self-serving manipulator, sure, but she's guided by some odd mix of vanity, pride, vengeance, a commitment to appearances, a genuine desire to seek justice for the underdog, and the vaguest outlines of a conscience. Even after two seasons, during which Hewes has proven that she's willing to screw over almost anyone to win her cases and have her way, we're still not completely sure what the woman is and isn't capable of. She is haunted by her crimes, there's no doubt about that. It's hard not to be a little bit daunted when your husband ditches you and your own son tells you, "People either leave you, or they die. Those are the only two endings possible."

What's interesting about Patty is that she keeps thriving in spite of everything -- or is she just appearing to thrive? Glenn Close shows us so much of Patty's emotions, but she also keeps a tight lid on Patty's deepest desires. When Patty is offered a chance to bring love back into her life, will she take it? We can't tell. She's utterly unpredictable, and that brings  a palpable charge to every scene she's in. She moves through the world as this confrontational, straight-talking lawyer, but in truth she's unable to speak honestly or directly to anyone in her life, sending Ellen odd gifts (As a sign of allegiance? Remorse? Because she wants a favor?), making warm, friendly statements that can also sound like veiled threats.

But when Julian refers to her "mask," Patty really does seem to believe that with her, "what you see is what you get."

Of course, the most dangerous people in the world are the ones who have mastered the art of self-deception. And if there's one thing Patty Hewes is better at than fooling others, it's fooling herself. Even if Patty seems benign at the outset of Season 3, even if that seething, enraged dragon lady is nowhere to be found, in Patty's own words, "She'll be back. Trust me."