Our daughters should not be cut

Female genital mutilation isn't just a problem in other countries. It's happening here, and we need to face it 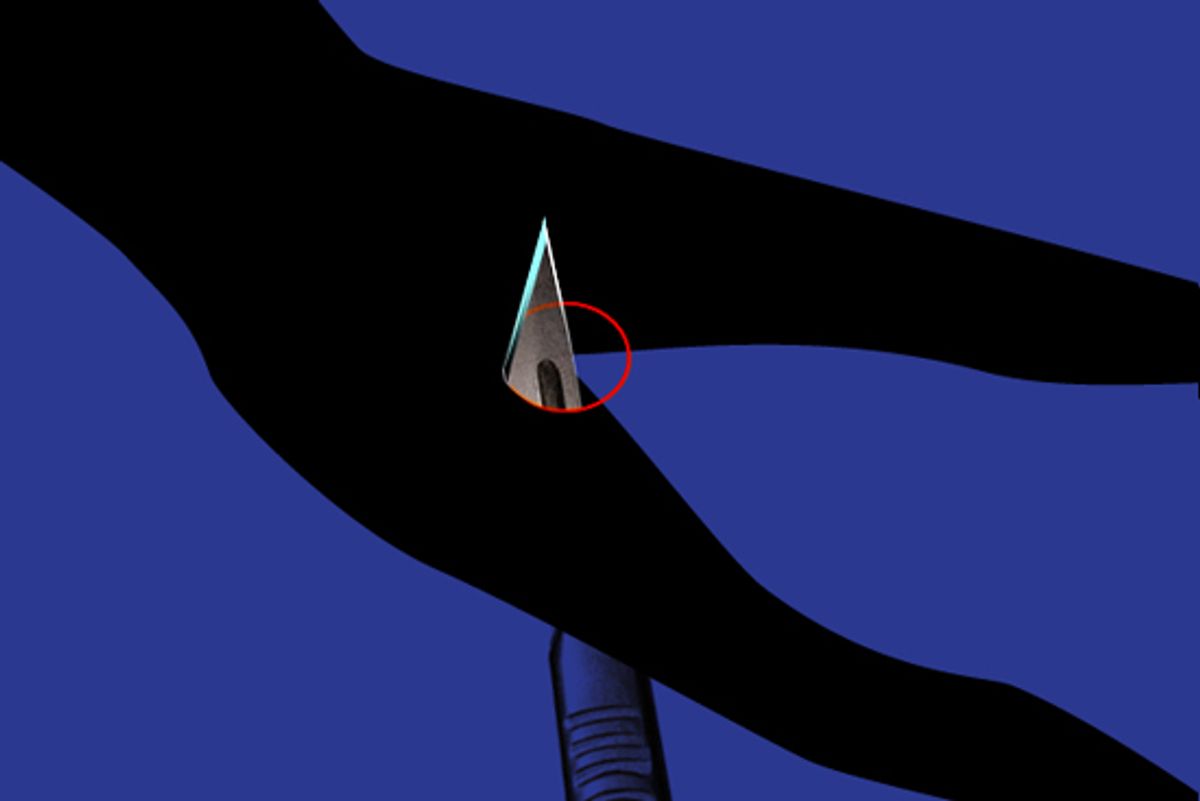 FGM in the USA Some girls came back from this past winter break with Christmas loot, ski tans, still more to say about "Twilight: New Moon." But others, women's health experts suspect, came back with deep, and literal, wounds to heal. According to human rights advocates and service providers, families in the U.S. who have immigrated from countries where female genital mutilation (FGM) is practiced often take their daughters home, when school is out, to be cut.

Yes, FGM is practiced -- or at least planned -- on U.S. soil, on girls in immigrant families who were born and/or raised here. Perhaps even among people you know: Not long ago, a concerned mother posted on my Brooklyn-area parenting list-serv that she believed an eight-year-old friend of her daughter's had undergone some form of the procedure in her home country in the Middle East (and appeared to be markedly traumatized). Archana Pyati, an asylum attorney for Sanctuary for Families in New York, has encountered dozens of FGM cases just in the past six months. "The majority of our African clients have been through it, and most often, they are fighting to protect their daughters," she says. (Older relatives with "seniority" often push for the procedure.) "It is our hope that by recognizing that FGM may be occurring under our noses we will become better able to respond to it, just as we would any other form of violence against children," she says.

Right now, though, that's not happening. While numerous countries, cities, and villages on other continents have made significant strides toward prohibiting and preventing the procedure -- and while it's been outlawed by U.S. federal law since 1996 and is also illegal in 17 states -- its practice by immigrant families here is, by all anecdotal reports, only increasing. Yet there remains practically no way to address it any way other than case by brutal, heartbreaking case. "The silence hasn't been broken here," says Taina Bien-Aime, executive director of Equality Now. "It's an issue that affects thousands of [U.S.] girls, some of whom were born here, and yet no one is really paying attention."

FGM refers to several different traditional rite-of-passage practices in parts of Africa, Asia and the Middle East that involve the cutting of female genitals -- from a ceremonial pinprick to "clitoridectomy" to removal of part or all of the external genitalia -- for non-medical reasons such as "to reduce woman's libido and help her resist â€˜illicit' sexual acts." Health consequences include severe pain and bleeding, hemorrhaging, chronic infection, infertility, painful intercourse, post-traumatic stress, pregnancy complications possibly fatal to the baby, and death of the victim herself. FGM is recognized internationally as a violation of the human rights of women and girls, reflecting, as the World Health Organization puts it, a "deep-rooted inequality between the sexes, and [constituting] an extreme form of discrimination against women." In her recent landmark speech on global reproductive health, Secretary of State Hillary Clinton cited an estimated 70 million victims of FGM among the "intolerable" statistics of women's lives worldwide; the World Health Organization says it's as high as 150 million. In the U.S., according to Equality Now, 228,000 women and girls are estimated to have undergone or to be at risk for FGM -- a old number long said to be on the rise.

Yet only one case has been prosecuted in the United States, ever; the circumstances were so anomalous, however, that some advocates say it doesn't even really count. ("We always thought the first one would be a girl who bleeds to death, but that hasn't been the case," says Bien-Aime.) Most U.S.-based cases of FGM, or its threat, fly way under the radar -- especially when its victims travel out of the country. Reporting, even addressing it at all, is stymied by its deep cultural entrenchment and misplaced "sensitivity" by some outsiders. And, of course, the practice affects primarily girls of color, poor ones at that: pretty much as marginalized and bottom-rung as you get.

Consider New York, whose metropolitan area is considered to have the highest number of women and girls potentially affected by cutting. In the past, New York City's Administration for Children's Services has worked with Sauti Yetu Center for African Women in the Bronx to provide community forums and awareness trainings for ACS staff -- but no more. In fact, an ACS spokesperson said that "the issue of FGM has rarely if ever come across our work in New York City." Today, search for "female genital" at nyc.gov, and you get a bunch of stuff about STDs. New York state law bans FGM of minors, criminalizing both the person who performs the procedure as well as the parent or guardian who OKs it. The law also requires the state Office of Children and Family Services to establish "education, preventive and outreach" activities in communities where FGM is traditionally practiced. According to reports, however, not much of that has happened in a decade; officials confirmed that there is no particular program in place today. Versions of a bill that would require the state to report to the governor annually on its efforts to address FGM has passed the state assembly repeatedly since 1995 but has died a thousand deaths in the Senate. (Re-re-reintroduced in January 2009 by Assemblywoman Barbara Clark of Queens, the bill is currently cooling its heels in the Senate's Health subcommittee.) Likewise, according to Bien-Aime and others, little is happening at the federal level, where similar laws both criminalize the act and require outreach. (The Office of Women's Health did not return repeated calls and emails.)

Much of the work of intervention has therefore fallen to advocacy groups like Equality Now, along with community-based and service organizations such as Sauti Yetu and Sanctuary for Families (SFF). Sanctuary for Families does outreach through schools and community groups, trying to educate both girls and the adults they see -- teachers, guidance counselors -- about the risks and realities of FGM, offering (for one thing) in-school clinics that give girls the opportunity to raise the issue. "We ask if any students would like to meet with lawyers who can answer questions about immigration and then we raise the issue one-on-one if it seems relevant, based on their country of origin," explains Pyati. "We might learn that they're afraid, or that they have a classmate who is." Sanctuary asks guidance counselors to reassure students that any conversation they have with a Sanctuary lawyer will be confidential, and works to "make sure they know that FGM is a very serious form of violence," says Pyati.

While school officials are mandated reporters of child abuse, possible cases of FGM may give them -- and other adults in a position to suspect it -- pause. Is it a "cultural" practice that others somehow must respect? Is reporting it anti-Muslim? Will a child be summarily removed from her home -- from an otherwise loving family who bears no other threat of violence? Such concern are misplaced, says Pyati. For one thing, FGM is a social custom, not a religious practice. Also, reporting a suspicion of child abuse does not always or automatically result in separation of the family in question. That said, "It's a mistake to assume that FGM is a stand-alone event," she says. "FGM, a serious violation of human rights, is performed in a context of discrimination and violence against women. Where a girl's rights are so compromised that she has to undergo a painful procedure that is potentially life-threatening and carries life-long physical and psychological consequences, it can indicate that other forms of abuse may be ongoing." Physical and psychological abuse may be used to force a girl to submit to FGM; FGM may be a way of preparing a girl for a marriage against her will, to which she has no right to object. And once she is married, her family may force her to bear children, have sex and endure other gender-related violence.

Says Pyati: "We report child abuse. Why wouldn't we report a form of violence against a girl that will change her body for the rest of her life?"

The profound, centuries-old ingrainment of the practice -- some believe un-"circumcised" women are possessed by the devil, for example -- also makes it hard for large groups like Equality Now to form coalitions with local groups in immigrant communities. The people those groups represent "don't want to talk about it," Bien-Aime says. "They feel overwhelmed just by being here. They're struggling with finding jobs and sending their kids to school. They're like, â€˜Are you crazy? That's at the bottom of the list. Why are you so obsessed with my daughter's genitals?'"

And at the level of law enforcement, advocates say, bans on the procedure stateside don't go nearly far enough. There are "circumcisers" who do the job in the U.S., hush-hush, a whole series in one afternoon, says Bien-Aime. But if we're not catching them, how are we to track those who perform the procedure on U.S. girls in to their home countries? Only Georgia and Nevada's anti-FGM laws include so-called "vacation provisions," which criminalize the removal of a child from the state to subject her to FGM. Advocates say such provisions must be universal.

Even then, prosecution, or at least protection, would still be dependent on someone speaking up, someone dropping a dime. In the UK, France, and Belgium, for example, women's groups who work with refugees will call partner grassroots groups in Senegal or Mali to let them know that one of their families is heading home with their daughter. The local African group will meet that family at the airport, follow them to their village, and warn them that their daughters had better stay "intact" or their papers will be compromised. "We are light years away from that," says Bien-Aime. "No one says it's easy or not sensitive but you have to start someplace. We need to raise awareness with campaigns like those we've seen for sexual harassment or domestic violence or anti-smoking," she continues, noting that many immigrant families arrive here after spending years in refugee camps, unaware that their own countries have taken steps to end the practice. "All the relevant providers need to be in touch and know what FGM is and how to protect the girls, and where we punish those who perpetuate it. The law is a deterrent. All you need is one case to start the process."

Bien-Aime recalls the case of a 15-year-girl in New York City, forcibly married to an older man, who called Equality Now to say she'd overheard that her 9-year-old and 9-month-old cousins were being sent back to Gambia to be cut. "I scrambled to find a social worker from Gambia to go into the house and talk to the family, but I couldn't," says Bien-Aime. The 15-year-old finally warned her cousin, who went to a school counselor, who sent someone to try to intervene. That worked -- mostly. "The 9-year-old was left behind for that summer vacation, but we have every reason to believe the 9-month-old was cut," Bien-Aime says. "She was a U.S.-born child. It happens. Her cousin was just lucky."