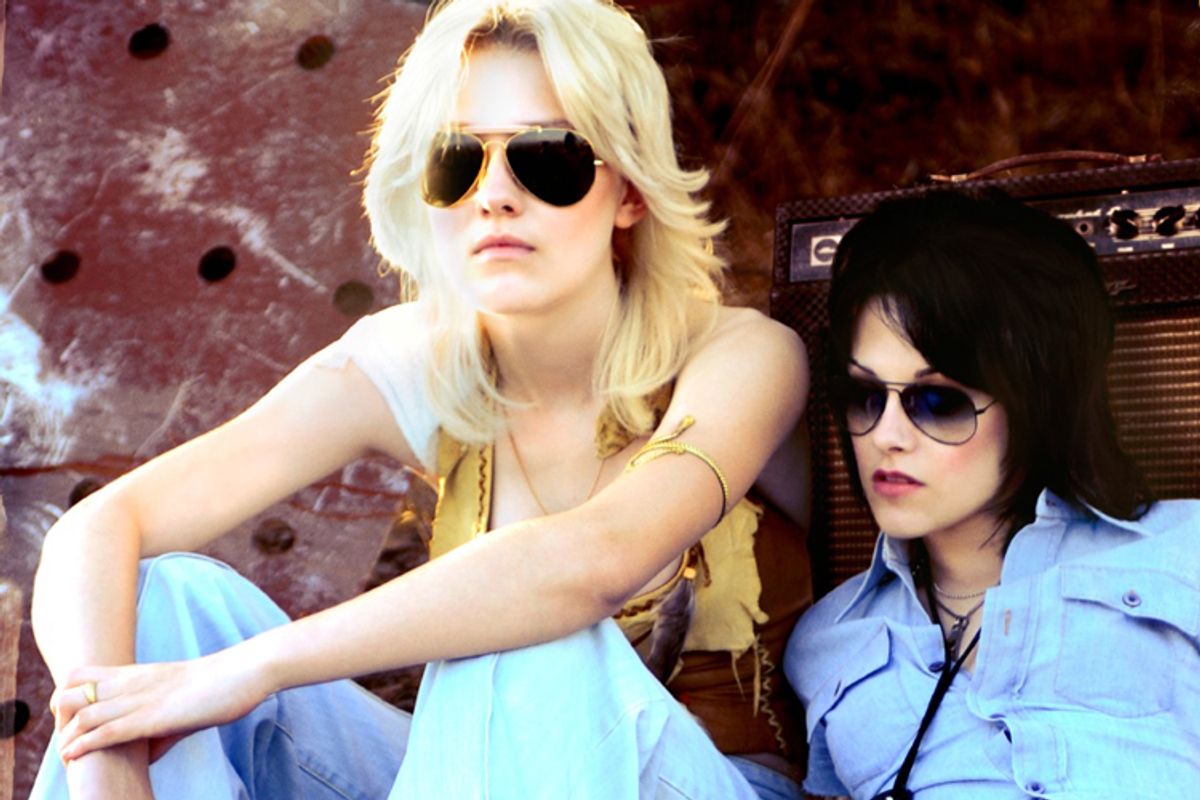 Dakota Fanning and Kristen Stewart in "The Runaways"
--

PARK CITY, Utah -- I was beginning to get worried about the young lesbian couple behind me in line at the Sunday night Sundance premiere of "The Runaways." They stood there shivering in the glittering Park City night, as the temperature dropped into the teens, wearing nothing but thin jackets and an old cotton blanket that looked like it had been purloined from Mom's closet.

What kept them going? Well, the fire of rock 'n' roll, of course. Perhaps also the nebula-hot celebrity of Kristen Stewart, a phenomenon that seems to baffle the young lady in question but has produced unmanageable hordes of paparazzi at numerous screenings and parties, undermining any pretense that this is a trimmed-down and refocused Sundance. Playing laconic, androgynous rock legend Joan Jett in music-video director Floria Sigismondi's feature debut may have struck Stewart as an antidote to "Twilight's" demure Bella -- Jett would just kick those preening vampire dudes in the nuts and stomp away -- but it was Stewart's presence that turned what would already have been a hot-ticket premiere into a mob scene.

Those half-frozen girls and I finally got seats, Sigismondi came teetering out on her eight-foot, fashion-vixen legs to say hello, and Stewart and the real-life Jett, both of them teeny-tiny, waved to the crowd and set a thousand iPhones and Flipcams whirring. Eventually it was time for the movie, and while I wouldn't call it a letdown -- Sigismondi shoots with style to burn, and the costumes, sets and hair are all meticulously, artfully correct -- you don't actually need me to tell you the story. Kids from busted homes start a rock band, meet a sleazy-genius manager, become too famous too fast, do a bunch of drugs and make some bad decisions, see the whole thing come crashing down. (Repeat as desired.)

Yes, of course there was one crucial difference between the Runaways and just about every other mid-'70s band, and that difference changed rock history, 20 years or so before the riot-grrrl meme. I think Sigismondi gets that aspect of the story just about right. Creating an all-girl band that actually rocked, and whose members would strut the stage like the Stones or Aerosmith, was the joint inspiration of Jett and producer-manager Kim Fowley (played with delicious, scenery-chewing abandon by Michael Shannon). They needed no grasp of feminist theory to understand that things were changing in mid-1970s America, and that an all-female band that actually rocked hard, and wasn't a transparent cheesecake gimmick, could hit the big time virtually overnight.

While the original idea was Jett's, it was Fowley who decided the band needed a hot blonde lead singer, and who picked a glam-rock teenager named Cherie Currie (Dakota Fanning) out of the crowd in a Hollywood nightclub. Interestingly, of the two front Runaways, it's Fanning's haunting performance as the ambivalent, damaged Currie that anchors the film. I don't know if the real-life Jett's involvement with the production complicated matters for the filmmakers, but Stewart's Jett remains a hooded figure, a tomboy rock 'n' roll cipher. We learn nothing about her family life, and the question of her sexuality and her relationship with Currie is veiled with hints and allusions.

I'm not sure that's exactly a criticism. We have no inherent right to the details of Jett's personal life, and I certainly don't think that probing psychological realism is the only way to tell a living person's story. It's more that Sigismondi has made a straightforward rock 'n' roll biopic that's fluid and exciting to watch, but clearly aspires to something more. It aspires, in fact, to the mind-blowing power that "Cherry Bomb" wielded over a distinctive subset of adolescents 35 years ago. Sometimes mind-blowing power isn't available, and a rollercoaster ride of stardom and depravity will just have to do.

Elusive British street artist Banksy is in Park City this week -- as the trompe l'oeil murals appearing around town attest -- but of course he did not reveal himself at the premiere of his first film "Exit Through the Gift Shop," another hot ticket this weekend. It's not exactly a movie about his own endlessly imaginative work -- which has included hanging his own paintings in the Tate Gallery and bending a London phone booth in half -- nor is it exactly about the ambiguous "street art" movement that has bridged the gap between graffiti tagging and the gallery world.

Well, it's a little bit about those things, enough to offer newcomers a primer in both subjects. But Banksy's inventive and genial film, narrated by Rhys Ifans in plummy, self-mocking documentary-narrator tones, is really about how he half-accidentally helped a strange little French guy in L.A., a vintage-clothing entrepreneur named Thierry Guetta, become Mr. Brainwash, an overnight sensation (and flashpoint of controversy) in the contemporary art world.

There's a real danger here of falling into the traps set by a professional prankster like Banksy -- some conspiracy theorists have suggested that Mr. Brainwash is entirely Banksy's invention -- but for the moment I'm taking "Exit Through the Gift Shop" mostly at face value. It's a rueful, comic exploration of what happens when artists like Banksy and his friend Shepard Fairey, who've set themselves up as opponents of the pretentious, big-money art establishment, see their own weapons used against them.

Despite their rebel, street-artist status, Banksy and Fairey cling to relatively old-fashioned ideas about craft, training and vision, and the explosion of somebody like Mr. Brainwash -- who has no artistic training or ability, little knowledge of art history and a miscellaneous aesthetic cobbled together from every prominent pop or street artist since Andy Warhol -- calls all that into question. As Banksy's London dealer muses late in the film, "Good for Thierry if he can pull it off. At the same time, the joke's on ... well, I'm not sure who the joke's on. I'm not even sure there is a joke."

Sticking with inscrutable British phenomena, something like Chris Morris' "Four Lions" is utterly unimaginable in America. Morris studied the cases of homegrown British Muslim terrorists with real or imagined links to al-Qaida, and turned the results into a very dark slapstick farce about a group of lovable but incompetent morons devoted to the task of launching jihad in the industrial north of England. Yes, it's "In the Loop" meets "Paradise Now," and Morris dishes out the ruthless satire in all directions: The hardass white Muslim convert, the wholesome Pakistani immigrants, the devout mosque-goers, the inept police, the studiously liberal British politicians -- they're all criminal-grade idiots.

You'll laugh uproariously at what seems like a nihilistic but good-humored film, until you realize that Morris isn't actually kidding about any of it, and that where "Four Lions" is going isn't funny at all. I don't think this is the near-masterpiece some Sundance critics have proclaimed it, and it's pretty hard to imagine an American audience of any size tolerating this film. But it's a first-rate example of the self-lacerating, take-no-prisoners current in British comedy. (Watch a clip here.)