I have been thrust into the darkness of my own body, and I don't know what is happening to me 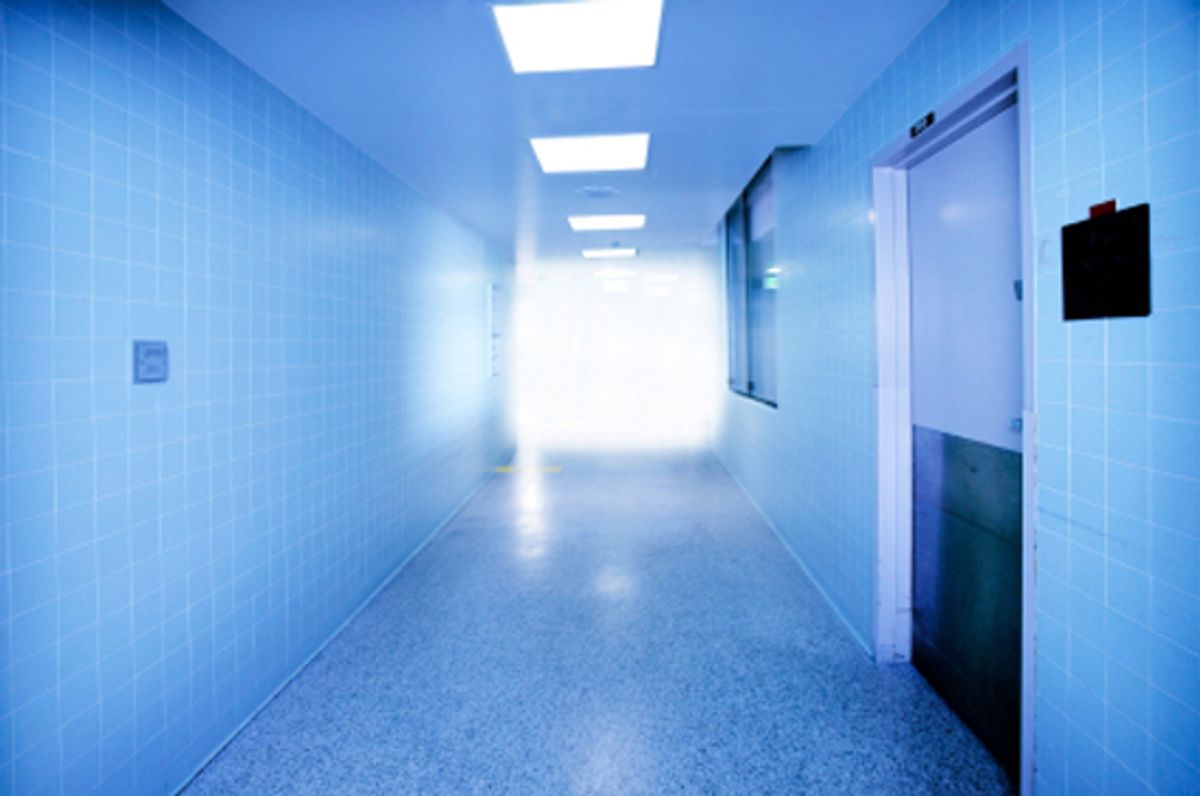 On many days since Dec. 17, 2009, I have been foggy on Percocet or Oxycodone. In the hospital I had a Dilaudid drip; there was a button hanging on a cord that I pushed with my thumb whenever I felt the pain of the surgical incisions or the other sources of post-surgical pain that still bedevil me from time to time.

It would be commendable to narrate the entire sequence of events that led to this moment lying on the couch supported on elbows typing awkwardly into the Macbook. But the power and concentration needed for such a straightforward narrative -- truth be told, the emotional stance too, and the intellectual energy -- these things are not liberally available in the way they were prior to surgery.

Yet a brief outline: I was diagnosed in November 2009 with a rare cancerous tumor located in the area of my lower back, on the front side of the sacrum; it measured about 9 cm by 8 cm by 6 cm and is called a sacral chordoma. The procedure with the highest probability of cure is a surgical removal of the tumor and enough surrounding tissue to ensure that no cancerous cells have remained. After numerous visits and consultations surgery was scheduled for Dec. 17. The operation is a long and complex one involving a neurosurgeon, a colorectal surgeon and a plastic surgeon as well as the anesthesiologist. It was estimated that the surgery would take from 12 to 16 hours but it did not take that long. I think it was about 8 or 10 hours.

Preparation for the Thursday morning surgery began Tuesday at midnight with a fast, followed by a colon-cleansing routine Wednesday involving this liquid that you drink that cleans you out completely. Then you wake at 4:30 Thursday morning to arrive at the hospital at 6; we took our places in a crowded and dark waiting room; we were among many other people also waiting for surgery. They were all types. It was nice to feel that we all had something in common. We were mostly a quiet bunch.

Anyway, as I said, a straightforward narrative is beyond the powers of your narrator; please allow it to suffice for now to say that I have been through an ordeal of some magnitude and have sensed throughout that some wisdom must be found somewhere in the experience but that for the time being the experience itself is far too large to be digested or contained or turned into fable or metaphor, and that I am too busy having the experience to contemplate it. At the same time I do feel the need to reach out and talk.

Some friends bought me a Kindle. That was a high point. One of them, the effervescent Mary B., brought me the Kindle while I was in the hospital all hooked up to tubes and wires and patched up with gauze and monitored constantly. The Kindle has been a revelation. Much will be said about that, I suspect.

There is also much to be said about pain, and about drugs and recovery and the particular strained indolence of staying home slowly getting better.

But for now that is mostly it. Everything takes longer now. That, too, is probably a revelation.

After decades lighting up the screens of memory and emotion, revealing ghosts, making dormant patterns appear as if dusted with fingerprint powder, finding heat to make readable the invisible ink of preconscious inscriptions, decoding obscure languages spoken by personal archetypes, learning the many disguises of my personal demons, their modes of influence and preferred times of visitation, having illuminated enough of the inner world to have a fluent vocabulary of need, fear, pain, joy and etc., so that I could with some regularity hear the pain and fear of others and decode the secret systems revealed in the invisible ink of strangers, I had come to feel that few dark and inaccessible areas still existed in my self.

Then I got cancer and was thrust into the darkness of my own body. I know nothing of its languages, its schemes and symbols, its humor and irony, its brilliance; I have no idea where to search for the string that is going to lead me out of this. Suddenly I am an ignoramus of my own self.

Thrown back upon myself in this way I am reminded of the great attraction of the kind of modern existential book in which a baffled, tortured character is encased in cement or hooded, thrown into a maze, made to suffer repeated and meaningless tortures, how such books appealed to me as a young man because they mirrored my experience of my self and the world, and how, to my chagrin, over the years, with the exception of a bracing ranter like Thomas Bernhard or someone as strangely keen and indicipherable as Robert Musil -- or, for that matter, Haruki Murakami of "The Wind-Up Bird Chronicle" -- I have preferred to read those who shed light rather than reflect back my own darkness.

So here I am again in a kind of mysterious, dark cell. I know very little of what is happening to me. I have it on good authority that I have been saved from a terrible death. This much seems reliable. Modern science has rescued me from a slow and painful death.

Having been found and brought to safety, I now am left with a set of residual difficulties arising chiefly from the methods used to save me.

I bear no grudge. I prefer living with these difficulties.

But I have no language with which to spell out the themes with which these difficulties are bound into story, or how one small cause led to this conflagration and hell, what primal sin it was, what is to be learned from the concatenation of seeming trivialities ... thus one is reduced to writing as cleverly as possible about what one does not know -- chiefly, as is obvious, by contrasting it with what one does profess to know.

And in the night if not too messed up on opioids or drowsy on gabapentin, a distant memory of beauty and order makes its feeble visit.

What happened? What is this strange life I am now leading, when at the end of the day a walk near the beach at sunset is an ecstatic release, when the Marin mountains to the north seem eternally beautiful and the tight-packed corrugations of gray, wintry storm clouds seem deeply lustrous and full of untold secrets?

I do not know. I do know that having been saved by surgery, being weakened and humbled, I am alert to every fiber of life, and raw to the wind.