Sundance, "The Kids Are All Right": Scenes from a lesbian marriage 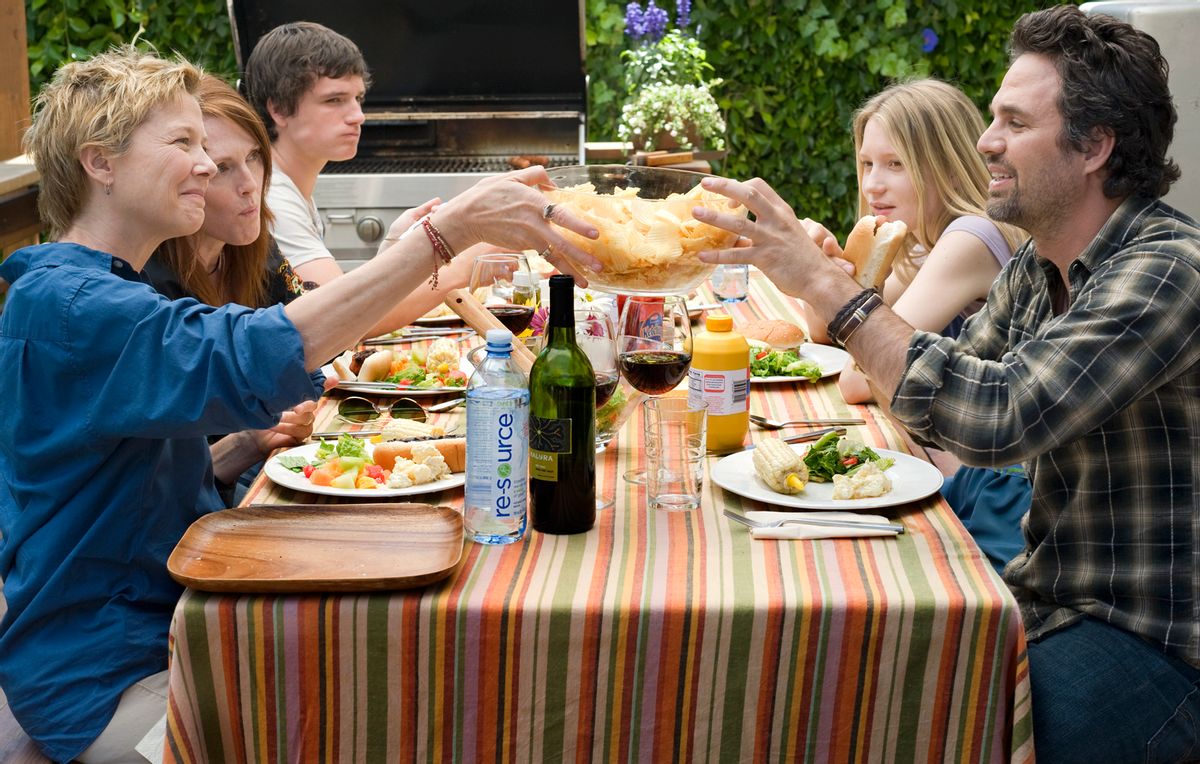 A still from "The Kids Are All Right"
--

PARK CITY, Utah -- I can't pretend to read the minds of people who passionately oppose letting gay people marry each other. If they assume that such marriages pose some anarchic challenge to the social order, I would point them towards writer-director Lisa Cholodenko's generous and hilarious comedy "The Kids Are All Right," which premiered here on Monday before a theater packed with bicoastal movie-biz luminaries. As Sundance Film Festival director John Cooper joked before the screening began, a terrorist could have taken out "what is left of the independent film business" in one shot.

All those people showed up because of Cholodenko's reputation as one of American cinema's best-kept secrets. Her earlier films, "Laurel Canyon" and "High Art," revealed her as an unusual combination of writerly intelligence and cinematic craft, but for whatever set of weird business reasons she has struggled to bring this scenes-from-a-lesbian-marriage comedy to completion, which took seven years from start to finish. Given the red-hot politics of the gay marriage issue, her timing is arguably perfect, and at any rate the movie is worth the wait. Cholodenko gets memorable performances from Annette Bening and Julianne Moore as the flawed, self-involved but profoundly human partners in a long-running relationship that's hitting one of those slippery, middle-age danger zones.

Nic (Bening) is a doctor, intensely driven and controlling, who's sliding into that polite, socially acceptable, four-glasses-of-red-wine version of alcoholism. Jules (Moore) has a succession of failed careers and businesses behind her, and now Nic's bankrolling another one, an eco-conscious landscape design business. They've slightly and subtly drifted apart -- they just don't put on that secret DVD of gay male porn that much anymore! They probably don't need a direct challenge to their family stability -- and to Jules' sexuality -- but here it comes, in the person of roguish, motorcycle-riding Paul (Mark Ruffalo), who just happens to be the biological father of Nic and Jules' teenage kids.

Their eldest, Joni (Mia Wasikowska) -- yes, of course she's named after that Joni -- has just turned 18 and made a call to the sperm bank that yielded half her genetic code. Her younger brother Laser (Josh Hutcherson) is actually the one who wants to meet Paul, but it's the ultra-bright, inquisitive Joni who forms a connection with him, and ends up hanging out at his organic mini-farm and restaurant, meeting his ultra-cool African-American business partner (and occasional lover) and so on. Nic and Jules furiously resist the intruder at first -- "We're not doing a time-share on our kids during Joni's last summer at home," Nic spits -- but despite their efforts Paul becomes a tentative, adjunct member of the family.

Once Jules agrees to take on Paul's weedy, overgrown backyard as her first landscape gig -- thrusting the two of them together for long days of Los Angeles summer sunshine -- the comic logic of the situation begins to move in an obvious direction. Beneath the easygoing surface Paul feels rootless and is drawn to Jules both physically and emotionally. She's flattered, and frankly horny, and as she says, "I keep seeing the expressions of my kids in your face." But there's nothing forced or false about what develops between Paul and Jules, and Cholodenko's definitely not interested in that story line about a hot lesbian who goes straight after a healthy dose of rogering.

I'd describe Cholodenko as an old-fashioned dramatist (in the best possible sense) whose heart and imagination are big enough for all these people. Each of the five principal characters takes a turn at the center of the story; each of them makes ferocious mistakes and must struggle to overcome them. It would be easy for her to cast Paul as the story's comic villain, the blithe, privileged, good-looking straight white guy who screws up the happy lesbian household. But Cholodenko draws out one of Ruffalo's best performances, capturing Paul as a sweet, sad Peter Pan figure whose principal sin is a sudden longing for what he can't have.

Nic and Jules were doing a fine job of screwing up their happy lesbian household before Paul's arrival, of course, but "The Kids Are All Right" ranks with the most compelling portraits of an American marriage, regardless of sexuality, in film history. Even more remarkably, it's an overwhelmingly affirmative warts-and-all portrait, not a Bergman-style descent into the pit of marital darkness. Watching two of our finest actresses playing unglamorous, flawed and complicated women is a rare privilege, and in virtually every moment and every breath of "The Kids Are All Right" we feel that Nic and Jules have created something that, damaged as it is, must be saved.

From dinner-table repartee over thank-you cards Joni hasn't yet written ("If it were up to you, our kids wouldn't even write thank-you cards," Nic says to Jules, "they'd just send out good vibes") to a tense, too-much-information conversation with Laser about their taste for "gay man-porn," Nic and Jules are facing age-old questions of parenting in a subtly altered context. If "The Kids Are All Right" may be an effective weapon in the cultural wars, that's not because it's offering some radical new vision of marriage and family. It's because it's so real, so sexy, so sad, so honest and so truly, heartbreakingly funny.