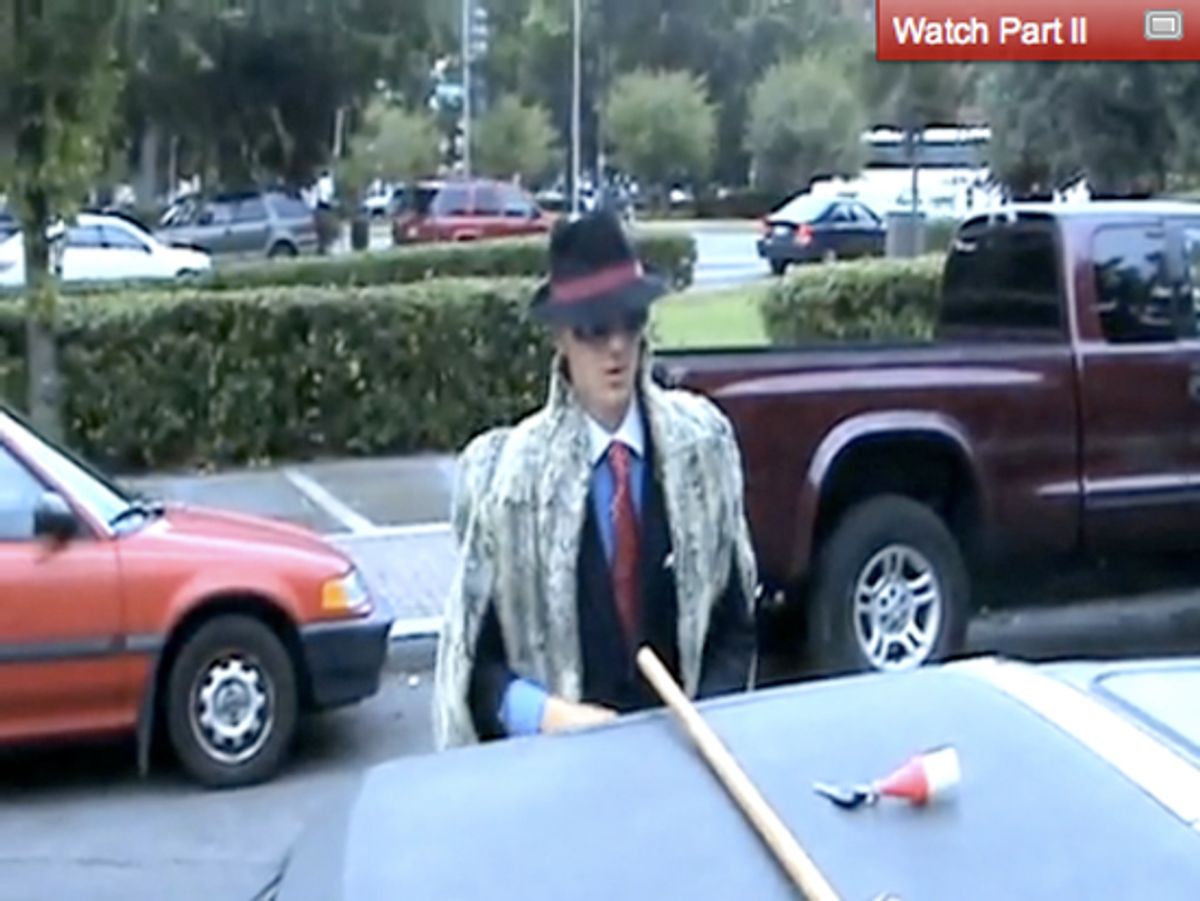 James O'Keefe, the 25-year-old who became a hero on the right by dressing as a pimp and filming himself and a female partner, Hannah Giles, exposing apparent malfeasance in ACORN offices, has gotten himself back in the news. This time, things aren't going quite so well for him: He and three others have just been hit with federal charges in an alleged plot to wiretap the phones in the New Orleans office of Sen. Mary Landrieu, D-La.

According to an FBI press release, two of the men who've been charged, 24-year-olds Robert Flanagan and Joseph Basel, posed as telephone repairmen and "requested access to the main telephone at the reception desk ... then manipulated the telephone system." They also "requested access to the telephone closet because they needed to perform work on the main telephone system," the release says. O'Keefe was allegedly "already present in the office, holding a cellular phone so as to record Flanagan and Basel." A fourth man, 24-year-old Stan Dai, is -- like O'Keefe -- charged with having assisted Flanagan and Basel. All four face a maximum of 10 years imprisonment, along with a fine of $250,00 and three years of supervised release.

Though of course this is as yet just an allegation, it's worth noting that O'Keefe's actions in recording the ACORN videos at least skirted the bounds of legality. At least one of the states in which O'Keefe and Giles ran their sting has what's known as a "two-party consent" law -- that is, all those participating in a private conversation must be aware of and agree to any audio recording, including video that captures audio.

O'Keefe and Basel appear to have a prior association; they were interviewed together by CampusReform.org about conservative newspapers they founded at their respective colleges.

Update: Via Ben Smith, FBI Special Agent Steven Rayes' affidavit about the arrests is available in PDF form here. According to Rayes, the recording O'Keefe was doing was video -- he was using his cellphone's camera. Rayes also says that Flanagan and Basel "have admitted to federal agents that they were not telephone repairmen and that they entered the office of Senator Landrieu under false pretenses," which is essentially one of the crimes with which they were charged. As for O'Keefe and Dai, according to the affidavit, they've both "admitted to federal agents that [they] worked with Flanagan and Basel in the planning, coordination and preparation of the operation."

Update 2: According to the New Orleans Times-Picayune, another of those arrested, Flanagan, is the son of the acting U.S. attorney for the Western District of Louisiana. (The incident occurred in the Eastern District's jurisdiction, and that's where the men have been charged.) The Times-Picayune also reports that the four are being held in St. Bernard Parish Prison, but on Tuesday afternoon they appeared before a magistrate judge who set bond at $10,000.

Update 3: Dai, too, appears to have a background in conservative politics. A Stan Dai who appears to be 24 years old now was president of the Conservative Student Union at George Washington University. A 17-year-old Stan Dai was quoted in a 2003 USA Today article about political activism on high school campuses, saying, "The people who organize the anti-war movement annoy me" and calling Iraq war opponents "well-meaning but naive." In 2005, GWU sophomore Dai was the recipient of a $5,000 scholarship from the Philips Foundation under its Ronald Reagan Future Leaders Scholarship Program.

Update 4: Andrew Breitbart, who runs Big Government, the Web site that promoted O'Keefe's ACORN videos, has put out a statement: "We have no knowledge about or connection to any alleged acts and events involving James O’Keefe at Senator Mary Landrieu’s office. We only just learned about the alleged incident this afternoon. We have no information other than what has been reported publicly by the press. Accordingly, we simply are not in a position to make any further comment.”

It's early to gauge conservatives' reaction to this, but at least one, Michelle Malkin, had the right impulses. In a post on her blog, she correctly noted that the four "are, of course, presumed innocent until proven guilty," but said that the incident should be a "lesson to aspiring young conservatives interested in investigative journalism: Know your limits. Know the law. Don't get carried away. And don't become what you are targeting." Malkin also told her readers, "This is neither a time to joke nor a time to recklessly accuse Democrats/liberals of setting this up nor a time to whine about media coverage double standards. Deal with what’s on the table."

Update 5: A good measure of how big O'Keefe's ACORN videos became, and how invested the right became in them? The Democratic National Committee just got involved in the arrest story, with National Press Secretary Hari Sevugan putting out this statement:

The last time Mr. O’Keefe was in the news, Republicans broke land speed records to praise him as an American hero and fell all over themselves to out-do one another in expressing disgust, outrage and indignation at what he brought to light. Yet today, in light of these deplorable and illegal attacks on the office of a United States Senator by their champion, Republicans have not offered a single iota of disgust, a whisper of indignation or even a hint of outrage. The silence by Republicans in the face of these criminal acts by one their own speaks louder than then their wails of outrage ever did.

Update 6: In a statement of his own, Louisiana Democratic Party Chair Michael McHale said, "This is a Louisiana Watergate. Louisiana families are shocked and outraged that these men would break the law to carry out their political agenda with this Watergate-like break-in and attempted wiretapping."

Also, the Times-Picayune has updated its story with the news that the four have been released after they each posted bond. The article now contains this amazing scene:

At 4:40 p.m., O'Keefe, Dai and Basel were released from the jail and were waiting for a cab. Asked to comment, O'Keefe said only, "Veritas," which is Latin for "truth." O'Keefe's biography on the blog site www.BigGovernment.com says that he works at VeritasVisuals.com, although that site does not appear to be functioning.

O'Keefe spent most of the time in the men's room off the jail's lobby, then hustled to the cab when it arrived. As he ran into the back seat, he called out, "The truth shall set me free."