Scientology to the rescue 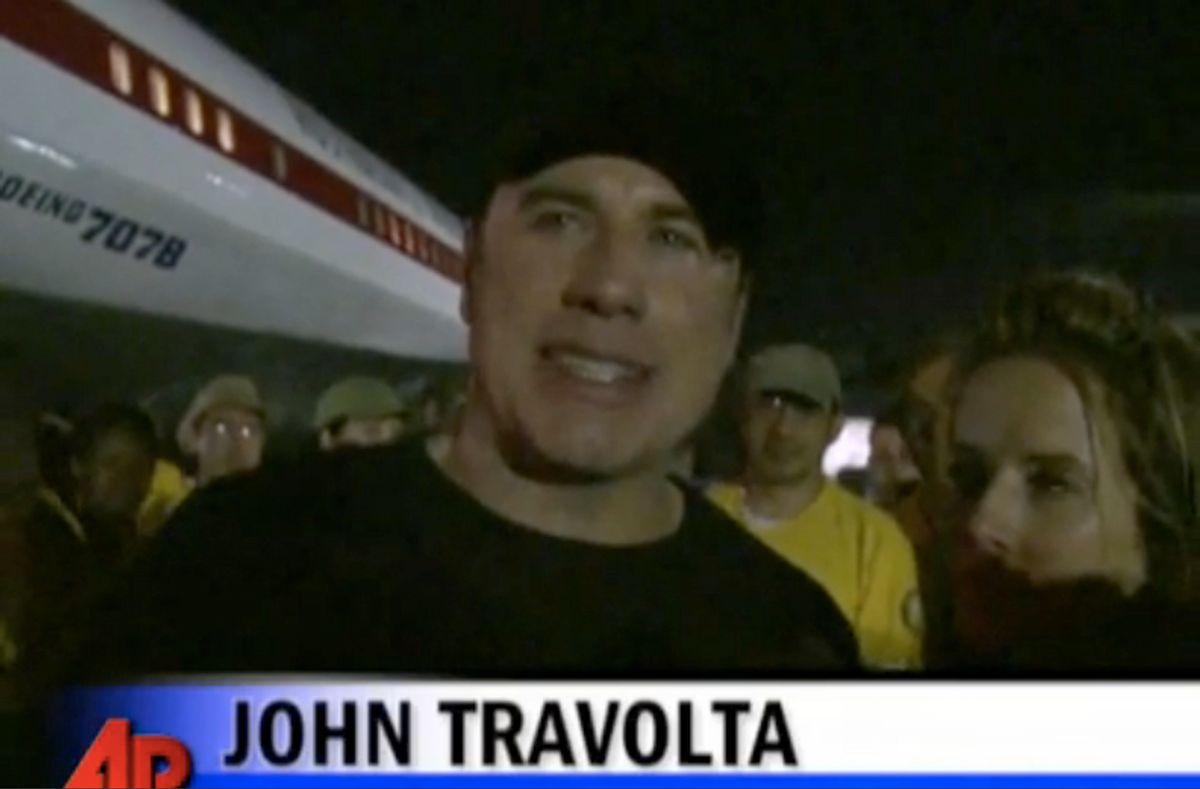 In the wake of the spectacular outpouring of relief to the people of Haiti, a number of generous benefactors have emerged. But few are alighting upon Port-au-Prince with quite as much baggage – for good and otherwise – as John Travolta.

Yesterday the 55-year-old actor did something extraordinary: He got off his ass and flew his own Boeing 707 from Florida down to Haiti with an astonishing four tons of ready-to-eat military rations and medical supplies. It is a gesture no one would look askance at in and of itself, particularly at a time when relief organizations like Doctors Without Borders have been having persistent problems getting into the beleaguered country.  We may raise a skeptical eyebrow at the fact that the famous movie star – and his lovely wife, Kelly Preston – just happened to arrive prepared for a camera-ready scene of unloading cargo, but it's doubtful anyone in Haiti right now is saying, "Medical supplies? We would, but you really sucked in 'Old Dogs.'"

Nevertheless, you can't say "Travolta" without adding "outspoken Scientologist," and that, inevitably, is where the story gets murky. Because along with all those desperately needed supplies that the dude graciously hauled down there, Travolta also packed something else – a phalanx of Scientology ministers.

This isn't the first time a high-profile member of L. Ron Hubbard's religion has rushed to the scene of disaster. Tom Cruise deployed himself to New York City after the 9/11 attacks -- and eventually used his mission there as an opportunity to call the Environmental Protection Agency a bunch of "liars"  for their cleanup efforts. Scientology stayed on to help create the auspicious-sounding New York Rescue Workers Detoxification Project, treating firefighters who'd survived the attacks – and their lingering physical effects -- through a "purification" program with no scientific credibility and for which some firefighters allegedly were asked to fork over as much as 5 grand. That's why people get a little creeped out when Scientologists come to the rescue.

And knowing that when Travolta made a similarly swift and generous gesture toward the people of New Orleans after Katrina, the church similarly hustled off to the Gulf Coast to counsel survivors, one gets a sense that the shell-shocked victims of January's quakes may be in for at the very least some old-fashioned Thetan dogma.

A U.N. spokeswoman told the Associated Press last week that at least 800 relief planes have been on a waiting list to get in to Haiti, which can only handle about 130 flights a day.  So when Travolta told reporters, "We have the ability to actually help make a difference in the situation in Haiti and I just can't see not using this plane to help," it's hard to believe the impulse is coming from anything but a truly decent and altruistic place. (It also makes one wonder how he swung it.)

But missionary work almost always comes with a mix of well-intentioned altruism and occasionally flat-out troubling proselytizing. And spreading good works can also mean spreading some dubious philosophies -- along with some troubling "cures." And it'll be interesting to see what Scientology, which has long been associated with celebrities who can afford the high cost of becoming "clear" will do in a country that was already the poorest in the Western hemisphere before an incalculable disaster.

The bottom line is, unless you've personally flown four tons of supplies to Haiti today, John Travolta has done more for its people and their immediate, life-or-death needs than you or I have or ever will.  It also doesn't change that hair-on-the-back-of-the-neck sense of dread that come from watching a gift bestowed with what sure look like a whole pack of yellow-shirted "volunteer minister" strings attached.