Apple's new device will inspire loads of techno-lust. But it looks more like a toy than a tool 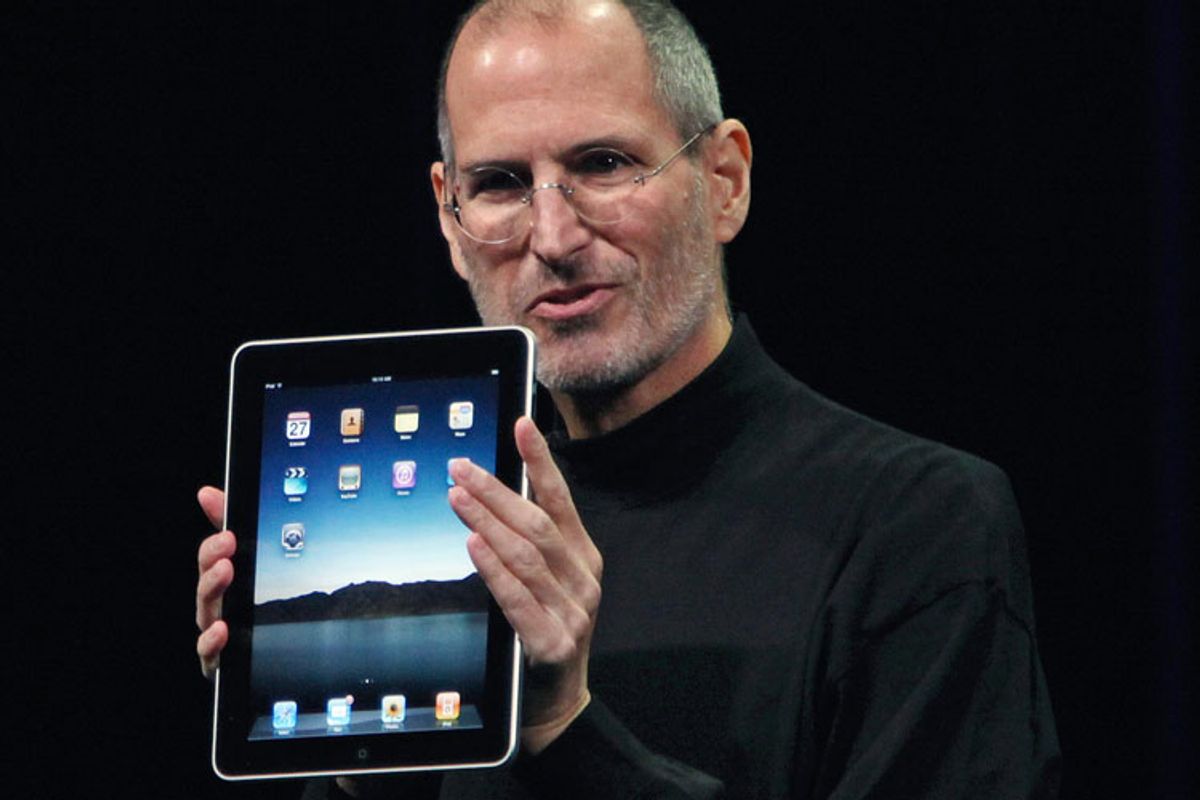 Judging by all the tweets, live blogs, streaming video commentary in the networked universe emitting a generalized sigh of disappointment, the announcement of the name "iPad" failed to thrill the masses who didn't happen to be lucky enough to be physically present at Apple's press conference in San Francisco on Wednesday morning. Steve Jobs promised the world "a truly magical and revolutionary product" that will deliver the "best browsing experience ever." He gushed that Apple's new tablet device is "a dream to type on," and "more intimate than a laptop."

And then he called it ... the iPad. And every geeky woman in the world giggled and started making iTampon jokes.

The iPad is a gorgeous, sleek device that looks like a big iPod Touch. You can listen to your music, read your e-books, check your e-mail, play your games, write your blogs, fiddle with your pictures and do most of the things that you might want to do with your laptop (but not at the same time -- no multitasking). Not exactly revolutionary, but presumably you will feel much cooler doing so than you ever have before, and you will be more comfortable sitting back with the gizmo while lounging on your couch, as Jobs did during the press conference.

The New York Times looks great on the iPad. So does Google Maps -- when Jobs demo'ed Google's Street View mode on the iPad, the audience cheered. (Of course, they also cheered when he said it had 10 hours of battery life. This audience was easy.) EA's "Need for Speed" also looked sharp, as did the iBook store and iTunes. If you like your iPhone, you'll love your iPad.

But you won't be able to replace your workhorse computer with a device that, for starters, only has 64 gigabytes of storage at the high-end price of $829. The iPad is a device meant to make consuming digital media as pleasurable an experience as possible, but any serious person is also going to need a real computer, as well as, of course, a phone.  Jobs was clear on this point -- the iPad is not a replacement for a laptop, but an intermediary device to fill the space between phones and laptops. But do we really have room in our lives for a laptop, a phone and an iPad?

That's the question many people are asking as they examine their already cluttered lives. But my suspicion is that maybe this product isn't really meant for serious people. Maybe it's designed for the generation that is cutting its teeth on iPhones, and Nanos and Playstation PSPs and Nintendo DSs, for a generation of people who want to consume rather than need to work. There's no question, a new standard has been set for groovy techno-fetishism -- people will desire it in a way that they don't tend to desire a desktop computer or laptop (except, perhaps, a Mac Air...) If you think of the iPad as more of a transitional device, a media player that fills the gap between what a phone can do and what a laptop is capable of, for a generation that expects its interactions with the digital universe to be iPhone slick, then there is definitely a market for this device.

But I'm not so sure that the demographic that feels lust in their heart for having the slickest e-book reader/iPod/portable game player on the block is the same demographic that will decide they need to start paying for the New York Times and GQ and Salon and Hulu, just because, well, the iPad makes it so easy. As a lifestyle accoutrement, the iPad is a killer -- but people paying 15 to 30 bucks a month for wireless access aren't going to be thrilled, I think, for paying an additional pound of flesh for their downloads. They'll be whiling away the hours watching YouTube in HD.

But we'll see. The iPad starts shipping in 60 days. And the people will let us know exactly how they feel.