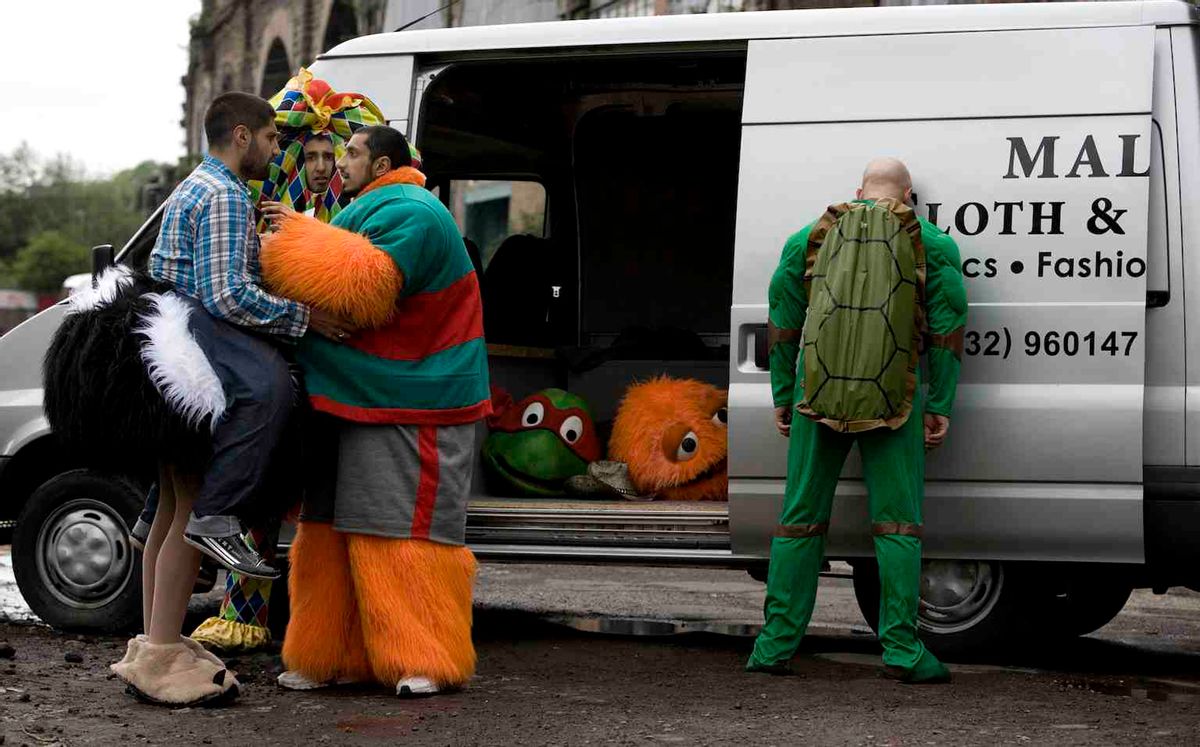 Preparing for jihad in "Four Lions"
--

PARK CITY, Utah -- British television actor, writer and director Chris Morris remains nearly unknown on this side of the Atlantic. But his provocative topical parody in shows like "Brass Eye" and "The Day Today" have built an Ali G-scale reputation back home, and Morris has seized headlines at Sundance this year with the premiere of his first feature film, "Four Lions," an outrageous farce about a quartet of numbskull Islamic terrorists in the north of England.

Morris' characters spend more time arguing about which of them is "the most al-Qaida" -- two have actually attended a training camp in Pakistan, where they rapidly flunked out after a gruesome but hilarious plot twist I dare not reveal -- and cooking up fourth-rate jihadi rap numbers than they do making serious plans to strike a blow for Islam against corrupt and secular British society. But as Morris put it when I met him in Park City, "You can be bumbling but dangerous." The four lions are prize-winning idiots who couldn't organize a five-a-side football match, in Morris' phrase, but they've also got a garage full of bleach and fertilizer and are determined to use it, somewhere and sometime.

If at first "Four Lions" seems like a wild but basically good-natured spoof addressing a hot-button topic, it finally proves to be something with much sharper teeth. The would-be jihadis leave messages for each other via cute little avatars on a social-networking site for fans of children's books, attempt to train a pet crow to deliver a bomb, and concoct a ludicrous plan to run the London Marathon dressed in puffy ninja-turtle-type costumes (loaded with explosives). Yet these details aren't altogether goofy or fanciful; they resemble the schemes and practices of genuine British terrorism suspects whose cases Morris has studied.

Although he's been depicted as a publicity-shy recluse in the British media, Morris in person comes off as thoughtful, piercingly intelligent and perfectly cordial. He did a hilarious impromptu comedy routine about attempting to convince a stoned Sundance projectionist to correct the sound at his premiere screening: "Heyyyy, director-man! The sound! OK! Do you know how good it feels to restore your own Hammond organ?"

Morris is a tall, lean, erudite fellow with an exploding hairdo who has clearly learned a great deal about British Islam, both in its everyday and more belligerent variations. As ruthless as the satire is in "Four Lions," I actually wonder if some thoughtful Muslims may welcome the film. Morris clearly depicts his harebrained aspiring terrorists as a tiny and marginal group within Islam, disconnected from the main currents of social and religious opinion. "I'm fully on board with the view that most British Muslims simply want to get on with their lives," he says. "They're not interested in this stuff, and rather wish it would go away."

The inept planning and disorganization on display in "Four Lions," according to Morris, have pretty much been a hallmark of most homegrown Western Islamist terrorism. "Mental frailty, idiocy and incompetence are a great unifier," he says. "You talk about five average blokes trying to organize anything, there are going to be problems. The most vivid example was a court case a few years ago where there was extensive MI5 surveillance of these guys who had 600 kilos of fertilizer and were talking very actively about blowing things up. They'd been to training camp, but they'd forgotten how to make bombs! They had to phone Pakistan and say 'Hey, bro, I've forgotten how to put the explosives together,' and the other guy thought he might be an intelligence agent, and wouldn't tell him."

Morris suggests that he is responding to a toxic Western combination of bigotry, ignorance and political correctness that has left us half-paralyzed by the threat of terrorism. If the Osama wannabes in his movie are thoroughly incompetent, the cops and politicians he shows aren't much better. "I felt like there was an orthodoxy, in America but increasingly also in Britain," he says, "where we're drip-fed a party line about these subjects [Islam and terrorism] that everybody knows is nonsensical but nobody can really talk about. It just struck me that we're not doing a good job, on any level, understanding these phenomena or addressing them. A movie isn't, you know, a policy paper; I'm not making recommendations. But if it makes people ask themselves questions, then that's all to the good."

Among the observations in "Four Lions" is the idea that the police and authorities are mesmerized by the most rigorous and conservative Muslims -- the bearded and veiled set -- who may strike Westerners as dangerous outsiders but are most often focused on the mosque, the Qu'ran and the many rules of daily prayer and observance. "What we don't grasp too well is that there may be people who have extremely conservative views about the world, the separation of women, and the West, but who also abhor acts of violence," Morris says. "We see a connection or a progression from Salafism to Wahhabism to, you know, Osama bin Laden, and while that exists, it's simply not true that they're all the same."

Prospective terrorists are more likely to be disaffected or unemployed young men who don't stand out as religious zealots. In fact, Omar (Riz Ahmed), the most organized and capable of the aspiring martyrs, is also a fully Westernized, likable guy with a wife and child. "The right way to put it, I think, is that Islam is incredibly complicated and so is terrorism," says Morris. "We have a tendency to simplify things and look for easy answers. Some of the 9/11 hijackers were incredibly religious -- that's my impression of Mohammed Atta -- and some of them were more like good-time guys who went along for the ride."

Perhaps the angriest and most deranged member of Morris' aspiring terror cell seems an especially unlikely figure -- a white, angry and painfully stupid English convert named Barry (Nigel Lindsay) who preaches violent Islamist uprising in his working-class, north-of-England accent. He too, says Morris, is not fantastic: There was a real-world right-wing activist who began studying the Qu'ran, at first to educate himself about his racial and ideological enemies, and who ended up converting himself. "There have been quite a few of these white converts who've taken on the most extreme kinds of Islam," Morris says. "It's almost as if they've given up so much, and gone through so much change, that they follow it all the way to an illogical conclusion."

Gradually, the madcap farcical tone of "Four Lions" gives way to something darker, as it becomes clear that Morris intends to follow his characters' pathological aims and motivations right to the end of the road. "There would be a typical movie way to end this story and bring some closure to these characters' stories," Morris says, "and that movie ending might have been more entertaining and satisfying. I wanted to resist that. I think that movie ending relieves you of the burden of thinking about this, of scratching your head and asking, 'What the hell was that about?'"