The state of Obama 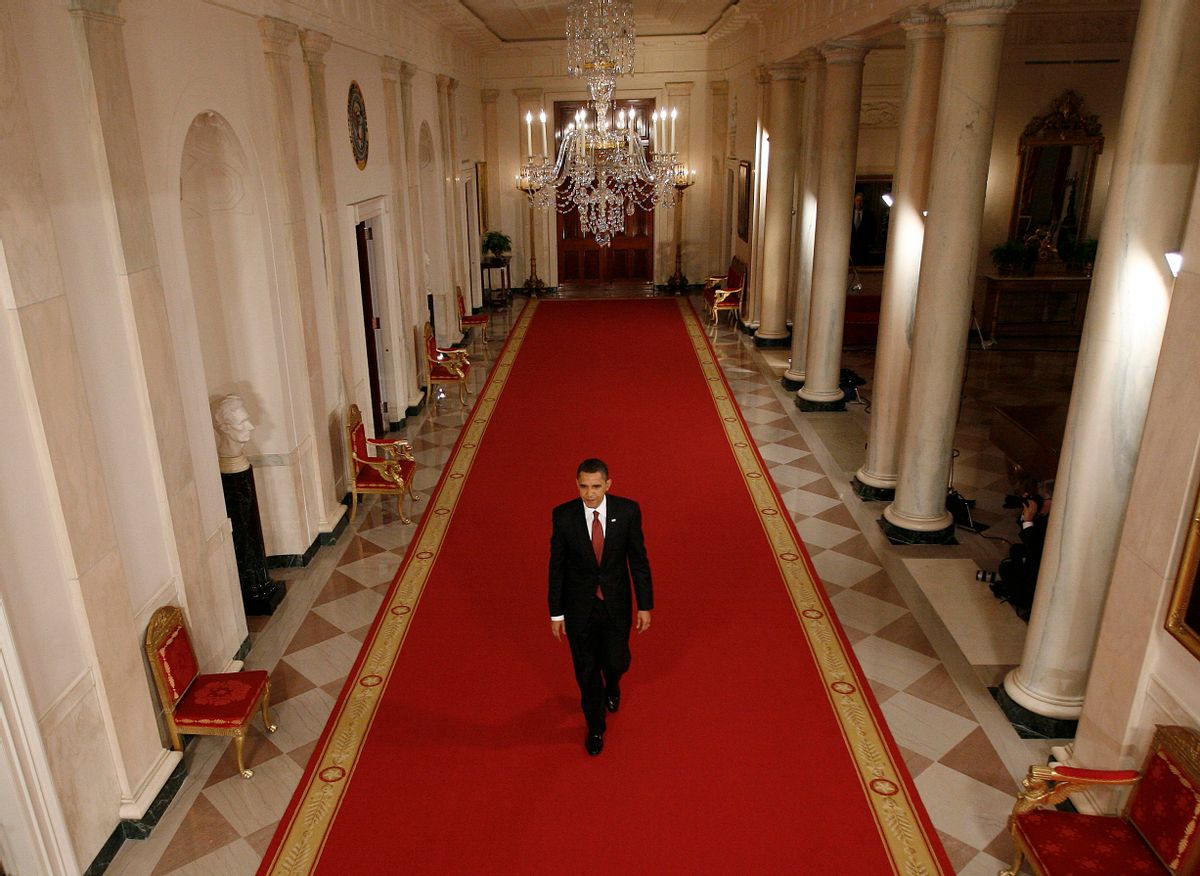 When President Obama last bustled up to the Capitol to give a report on the state of the nation, it was a lot more perilous. Wall Street's collapse had left the economy in free fall; major banks and auto manufacturers still seemed on the verge of collapse at any moment, and the unemployment rate was nearly 8 percent. Obama, though, looked stronger than ever. He had just signed an economic stimulus package into law, his approval rating hovered in the mid-60s and the Republican Party appeared to have absolutely no idea how to respond to what looked for all the world like an activist, energized Democratic majority in Congress.

Less than a year later, you might have noticed things have changed -- and not with the kind of change Obama and Democratic partisans or lawmakers particularly want to believe in. Unemployment kept rising all year, bumping along at 10 percent for the last three months. Yes, the car companies are still in business, but only thanks to an infusion of federal cash. Wall Street thrived, and is now just about back to the pre-panic days, with Goldman Sachs paying out an average half-million bucks in bonuses to each employee. And Obama? Well, if the last few weeks have been any indication, his state might not be even quite as good as the union's.

So even for a guy who's been known to give a decent speech every now and then, Obama will walk into the House chamber Wednesday night with a lot riding on the address. He needs to remind Americans of how bleak the future looked a year ago, and how close the nation came to a disaster far worse than the present (which is bad enough as it is); reissue his call, from a year ago, for bold action and investment in order to make the future better; smack Democratic lawmakers out of the daze they've been in since Scott Brown won the Massachusetts Senate election; push healthcare reform, his top domestic priority for months, out of legislative limbo; and maybe most important, he needs to give voters tangible signs that he understands their frustration over how slow any economic recovery has been to reach most of their pocketbooks, for all the billions of dollars flowing out of Washington. All in the same hour-long (or so) speech. Because by the time next year's State of the Union rolls around, Congress might look very different.

"He needs to show that he has a plan that puts the economy back on track, so those who are running for reelection in 10 months under the Democratic banner will have something to take to voters other than a lot of anxiety and anger," said Michael Meehan, a Democratic strategist.

Complicating matters, though, the White House is already sending mixed signals about what's going to be in the speech. Obama will call for a three-year freeze on discretionary domestic spending on anything besides national security -- which, most analysts believe, is exactly the kind of spending the government needs to be doing more of to get the economy moving again. Not to mention that it undermines the type of rhetoric Obama might otherwise need to use to defend the rest of his agenda. "This has no social redeeming value whatsoever," said Robert Borosage, co-director of the liberal Campaign for America's Future. "It miseducates the country, it represents an ideological retreat which doesn't make sense ... The administration defends it as being merely symbolic, but the symbolism is entirely wrong."

Late Tuesday, aides put out word that the speech would also include a pay freeze for political appointees and senior advisors -- which is the sort of thing it might have been helpful to announce hand-in-hand with the spending freeze, so it looked like more of a coherent package. And Obama's own remarks lately, about his willingness to be a one-term president, don't exactly mesh with the new fighting political spirit the White House says the return of 2008 campaign manager David Plouffe heralds.

Still, progressives are hoping the speech can help remind people that they elected Obama in the first place to do something about the mess the country was in after George W. Bush's administration. "We don't need tinkering around the edges," said Anna Burger, chairwoman of Change to Win, a labor coalition. "We need big, dramatic action" -- on everything from healthcare to jobs to holding bailed-out banks accountable for what they do with tax dollars. That means ending the tortured self-doubt that gripped Congress in the last week. "You just got to buckle down and do the gusty thing and take your hits," said Mike Lux, a Democratic strategist who served as the Obama transition team's liaison to progressive groups in 2008. "I think we do far better doing that than by panicking and suddenly dropping your agenda and dropping everything we told people we would fight for." The populist tone the White House has been striking since the Massachusetts election can only go so far without the economy actually improving -- which is going to take work. "As long as the economy is in bad shape, it's going to be hard for us," said Democratic pollster Mark Mellman. "Nobody should think that any generic message, any overall message itself, is going to be sufficient to overcome the real economic conditions that people face."

Republicans seem eager to present their simple "no" answer to whatever Obama says. "The president ought to start by saying we're going to put the healthcare bill on the shelf," said Senate Minority Leader Mitch McConnell, R-Ky. "No. 2, I hope the president will indicate that we're not going to allow taxes to go up this year ... I hope we'll hear the president say that, as soon as possible, the government is going to get out of the business of running car companies, banks and insurance companies so that we can be reassured, as we hope to have a better year in growing jobs and improving the economy, that the government is going to diminish its currently very intrusive role in our economy."

Which means some Democrats think there's an opportunity for Obama to use the speech to lay out the stakes for the election year ahead. "He needs to raise in people's minds the question about whether or not they really want to turn back the clock and adopt the policies that got us into this mess in the first place," Rep. Chris Van Hollen, D-Md., the chairman of the Democratic Congressional Campaign Committee, told Salon. "This is not about pointing fingers, it's much more about letting people know what Republicans are likely to do if you hand the keys of the car back over to them ... This election cannot just be a referendum on ourselves."

The elections, of course, are a long way off. And there's no telling what can happen in 10 months in politics. If you don't believe that, just take one more look back at February 2009. But if Obama wants to change the dynamic in time for the 2011 State of the Union, he needs to start Wednesday night.