Hype machine over, the iPad (really? iPad?) is unveiled 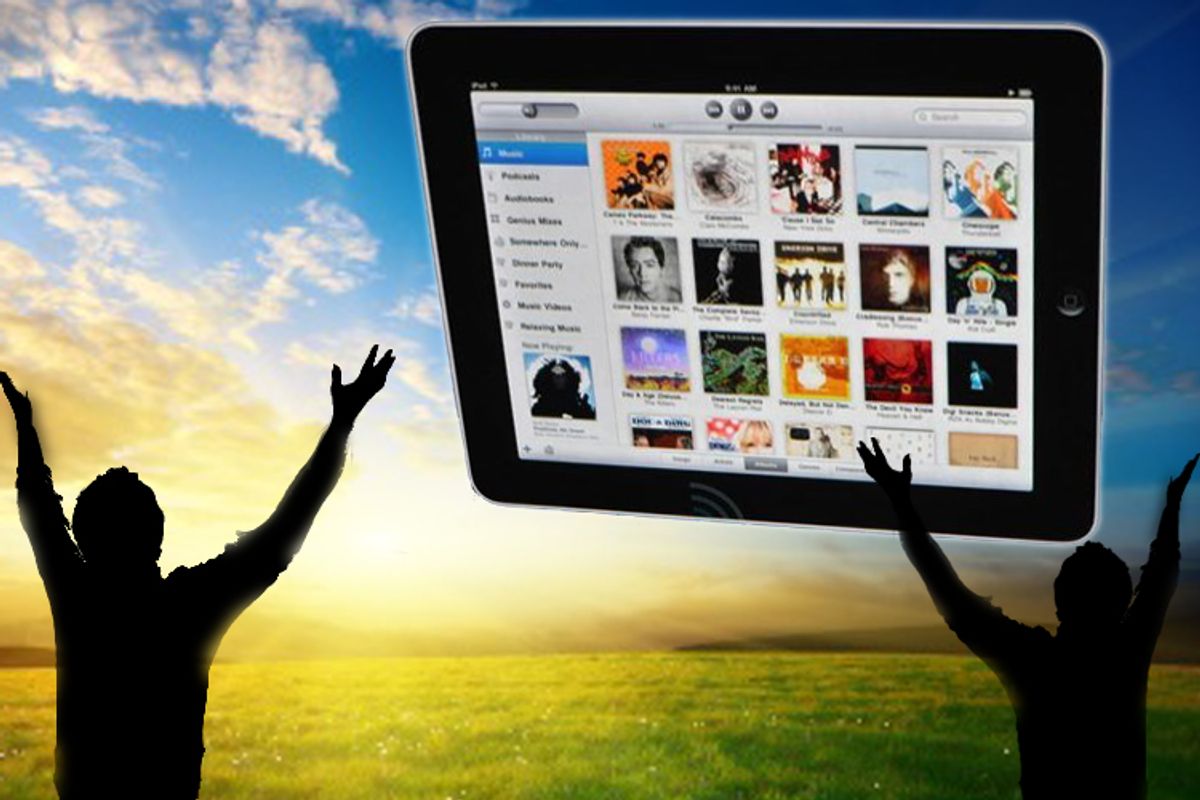 So after weeks of frenzied anticipation and overreaching biblical metaphors, the Apple iPad -- the most hotly desired doodad in the history of civilization -- has dropped.

I'm still not entirely sure what it is or why I need it. A cool-looking media browser? A $750 piece of hardware for people looking for something smaller than a laptop yet bigger than a phone? Something else with which to shuffle my Netflix queue or add apps? How many fart sound devices does one need? Because the nonstop news about this thing has been at a pitch usually reserved for global disasters and Megan Fox nip slips.

But I'm in. I'm a Mac. I've been a devotee since the day I bought my first cute little astronaut helmet-shaped Mac Classic. I still have my 11-year-old blueberry iMac (the children call it an "antique"). And then there's the iPhone. Oh, iPhone: my sin, my soul, my Tetris.

But will the rather menstrually named iPad (insert the sound of a heavenly choir here) live up to the hype? Will it be another iPhone, a device that actually did take an already existing device and turned it into that Hitchhiker's Guide to the Galaxy we spent our formative nerd years dreaming about? Because, seriously, despite its quirks and failings and the way it enslaves us to AT&T, the iPhone really is pretty fantastic.

As the parody site Fake Steve Jobs metaphorically said best, "Like, before that day, the world was one way, music was one way, culture was one way — and then after that day the world was never the same ever again." And it's true. A mere three years ago (8,000 eons in Internet time), I couldn't buy movie tickets, get subway directions to the theater, find a nearby restaurant for after, e-mail all the info to a friend and tell the universe about it on Twitter from my piece of shit Samsung. How bitchin' is the iPhone? For 99 cents, you can turn it into a rotary dialer.

Ah, but how quickly we take for granted the mobile ability to be like Lil Wayne.  Then it's on to the next thing. At this point, if the iPad doesn't cure baldness and fight crime -- and, of course, save both the economy and that dying beast we call mainstream media -- a lot of people are going to be sorely disappointed. Kids, remember that year you didn't get the pony?

Nearly a decade ago, before Segway launched, the world seemed ready to implode on itself in eagerness. Finally! The future is HERE! Nobody will ever have to walk again!  And then we realized, oh, that's actually quite silly.

It's likewise possible that a supersize iPhone (or a laptop with dwarfism, depending on how you look at it) will not, in fact, rock the world. The mind can only be so blown, especially when what was revolutionary yesterday is just another small, slim pad bouncing in the bottom of your purse today. This time next week the world may be shrugging and saying, "It's just a goddamn net book. But Applier. It doesn’t even run on unicorn blood."

Personally, eager as I am to touch, see, nay, taste the iPad (insert Jonas Brothers concert-level screaming hysteria here), I suspect I don't need to spend a few hundred dollars for yet another means of reading the Vows section or watching "Lost." And it's still not that exhausting to pick up a book and turn the pages, by the way. Then again, it is Apple, and Macheads are a crazy tribe. They will line up for miles to be the first to get their hands on anything with the image of a piece of bitten fruit anywhere on it. I know, I'm one of them. The heart wants what it wants. And when Steve Jobs purrs that the iPad (insert "Ride of the Valkyries" here) is "so much more intimate than a laptop, so much more capable than a smartphone," I do kind of want to make love to it a little. Because given enough insane, gotta-have-it hype, the heart can easily be persuaded that what it wants is to read the Vows section on a glare-free 10-inch screen.