The Supreme Court's legitimacy depends upon apolitical and restrained justices 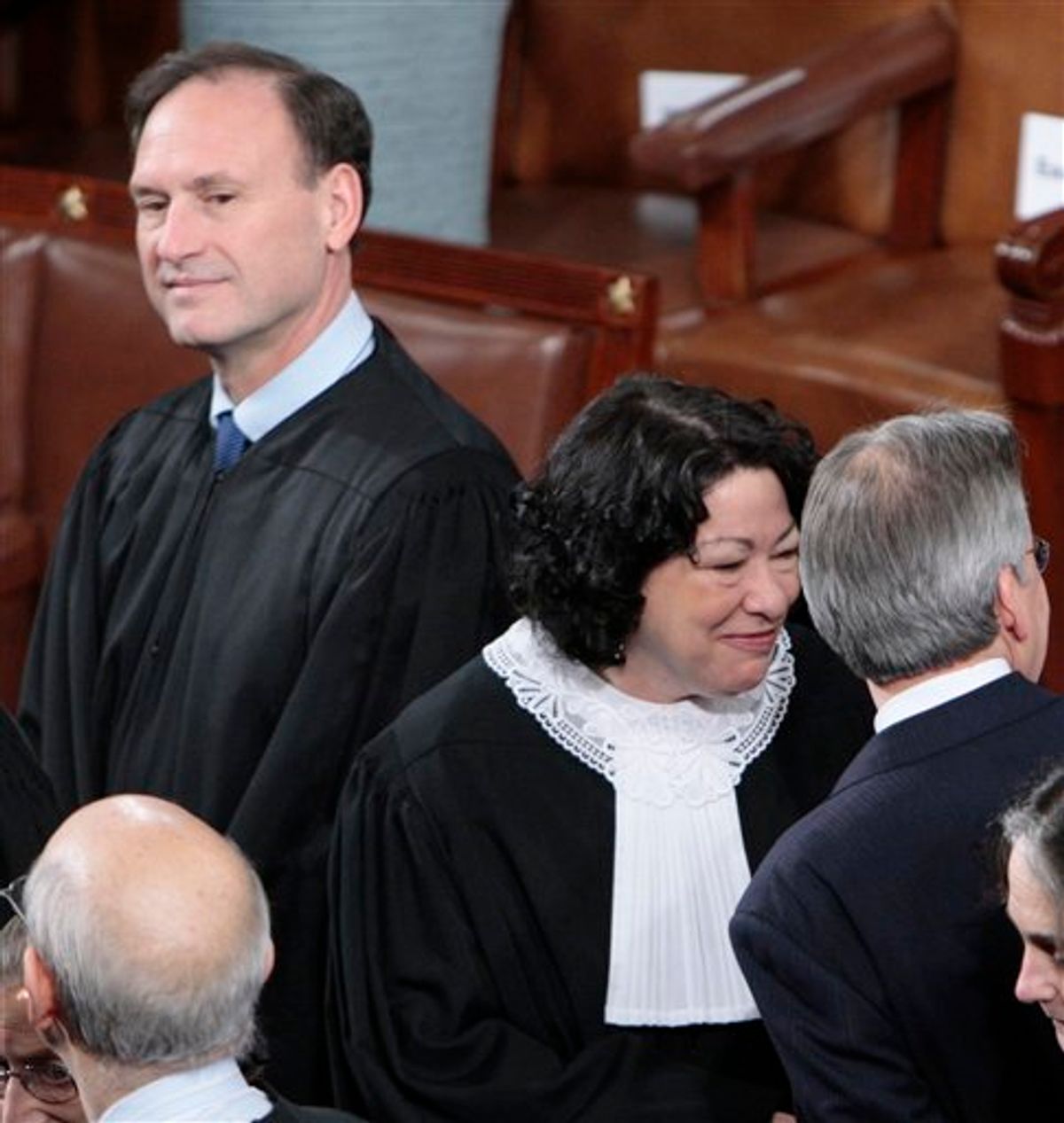 As I wrote at the time, I thought the condemnations of Rep. Joe Wilson's heckling of Barack Obama during his September health care speech were histrionic and excessive.  Wilson and Obama are both political actors, it occurred in the middle of a political speech about a highly political dispute, and while the outburst was indecorous and impolite, Obama is not entitled to be treated as royalty.  That was all much ado about nothing.  By contrast, the behavior of Justice Alito at last night's State of the Union address -- visibly shaking his head and mouthing the words "not true" when Obama warned of the dangers of the Court's Citizens United ruling -- was a serious and substantive breach of protocol that reflects very poorly on Alito and only further undermines the credibility of the Court.  It has nothing to do with etiquette and everything to do with the Court's ability to adhere to its intended function.

There's a reason that Supreme Court Justices -- along with the Joint Chiefs of Staff -- never applaud or otherwise express any reaction at a State of the Union address.  It's vital -- both as a matter of perception and reality -- that those institutions remain apolitical, separate and detached from partisan wars.  The Court's pronouncements on (and resolutions of) the most inflammatory and passionate political disputes retain legitimacy only if they possess a credible claim to being objectively grounded in law and the Constitution, not political considerations.  The Court's credibility in this regard has -- justifiably -- declined substantially over the past decade, beginning with Bush v. Gore (where 5 conservative Justices issued a ruling ensuring the election of a Republican President), followed by countless 5-4 decisions in which conservative Justices rule in a way that promotes GOP political beliefs, while the more "liberal" Justices do to the reverse (Citizens United is but the latest example).  Beyond that, the endless, deceitful sloganeering by right-wing lawyers about "judicial restraint" and "activism" -- all while the judges they most revere cavalierly violate those "principles" over and over -- exacerbates that problem further (the unnecessarily broad scope of Citizens United is the latest example of that, too, and John "balls and strikes" Roberts may be the greatest hypocrite ever to sit on the Supreme Court).  All of that is destroying the ability of the judicial branch to be perceived -- and to act -- as one of the few truly apolitical and objective institutions.

Justice Alito's flamboyantly insinuating himself into a pure political event, in a highly politicized manner, will only hasten that decline.  On a night when both tradition and the Court's role dictate that he sit silent and inexpressive, he instead turned himself into a partisan sideshow -- a conservative Republican judge departing from protocol to openly criticize a Democratic President -- with Republicans predictably defending him and Democrats doing the opposite.  Alito is now a political (rather than judicial) hero to Republicans and a political enemy of Democrats, which is exactly the role a Supreme Court Justice should not occupy.

The Justices are seated at the very front of the chamber, and it was predictable in the extreme that the cameras would focus on them as Obama condemned their ruling.  Seriously:  what kind of an adult is incapable of restraining himself from visible gestures and verbal outbursts in the middle of someone's speech, no matter how strongly one disagrees -- let alone a robe-wearing Supreme Court Justice sitting in the U.S. Congress in the middle of a President's State of the Union address?  Recall all of the lip-pursed worrying from The New Republic's Jeffrey Rosen and his secret, nameless friends over the so-called "judicial temperament" of Sonia Sotomayor.  Alito's conduct is the precise antithesis of what "judicial temperament" is supposed to produce.

Right-wing criticisms -- that it was Obama who acted inappropriately by using his  SOTU address to condemn the Court's decision -- are just inane.  Many of the Court's rulings engender political passions and have substantial political consequences -- few more so than a ruling that invalidated long-standing campaign finance laws.  Obama is an elected politician in a political branch and has every right to express his views on such a significant court ruling.  While the factual claims Obama made about the ruling are subject to reasonable dispute, they're well within the realm of acceptable political rhetoric and are far from being "false" (e.g., though the ruling did not strike down the exact provision banning foreign corporations from electioneering speech, its rationale could plausibly lead to that; moreover, it's certainly fair to argue, as Obama did, that the Court majority tossed aside a century of judicial precedent).  Presidents have a long history of condemning Court rulings with which they disagree -- Republican politicians, including Presidents, have certainly never shied away from condemning Roe v. Wade in the harshest of terms -- and Obama's comments last night were entirely consistent with that practice.  While Presidents do not commonly criticize the Court in the SOTU address, it is far from unprecedented either.  And, as usual, the disingenuousness levels are off the charts:  imagine the reaction if Ruth Bader Ginsburg had done this at George Bush's State of the Union address.

What's most disturbing here is the increasing trend of right-wing Justices inserting themselves ever more aggressively into overtly political disputes in a way that seriously undermines their claims of apolitical objectivity.  Antonin Scalia goes hunting with Dick Cheney, dubiously refuses to recuse himself from a lawsuit challenging the legality of Cheney's actions, and then rules in Cheney's favor.  Scalia has an increasing tendency to make highly politicized comments about purely political conflicts, most recently defending torture in an interview with 60 Minutes.  As part of Clarence Thomas' promotional efforts to sell his book, he spent substantial time building his conservative icon status with the furthest right-wing media elements -- even parading himself around on Rush Limbaugh's radio program -- and turned himself into the food fight of the week between Democrats and Republicans.

It was clear from Sam Alito's confirmation hearing and his record of appellate opinions that he is a dogmatic, state-revering, right-wing judge.  But last night, he unmasked himself as a politicized and intemperate Republican as well.  Much of the public will view his future "judicial" and "legal" conclusions -- and those of his fellow Court members -- with an even greater degree of cynicism.  And justifiably so.  Whatever impulses led him to behave that way last night, they have nothing to do with sober judicial reasoning or apolitical restraint.

Three related items:  (1) I spent substantial time over the last week here and in other venues partially defending the Citizens United ruling; yesterday, Harvard Law Professor Larry Lessig responded to my arguments.  I disagree with several of his points, but as I said, this is a hard case and his objections are reasonable and worth reading; (2) Politico's Josh Gerstein notes language in Obama's speech that suggests an embrace of the GOP/Scott-Brown position on detainee rights; I'm not sure that meaning was intended, but it certainly merits a response from the White House; and (3) reactions to Obama's speech were painfully predictable:  Obama lovers swooned, Obama haters spat contempt, and the "TV pundits" did exactly what Obama said they do ("TV pundits reduce serious debates to silly arguments, big issues into sound bites"); it remains to be seen how the less committed among us will respond.  Even more important will be the extent to which Obama's actions match his rhetoric.

UPDATE:  In comments, both casual_observer and DCLaw1 add important points about what Alito (and Obama) did.

[NOTE:   The comment section is temporarilly closed because I accidentally hit the "close comments" button and now can't get it re-opened; Salon technicians are frenzily working on the problem and, hopefully, it will be re-opened shortly.]

UPDATE II:  Speaking of Citizens United, Greg Sargent reports that numerous labor and progressive groups have signed a letter urging the White House to support a pending bill to provide for public financing of campaigns as a means of addressing the disparities in corporate spending.  The letter is here.  As I argued from the beginning, that is exactly the right way to address the problems of corporate and lobbyist dominance over our political process:  it's far more effective than trying to restrict speech and, as a side benefit, doesn't violate the Bill of Rights.

UPDATE III:  Yale Law Professor Jack Balkin documents that roughly 25% of Franklin Roosevelt's 1937 State of the Union address was devoted to criticizing the Supreme Court and various rulings which struck down his domestic legislation.  Whatever one thinks of the one paragraph of Obama's address devoted to the Citizens United ruling, it was not "unprecedented."